Gonzalo Higuain scores goals. Juventus were acutely aware of this back in the summer, pulling off an audacious move to bring him to Turin after watching him set a new Italian top flight record in 2015/16. His 36 goals — bagged in just 35 appearances — beat the league’s all-time high mark which had stood for 66 years, prompting the Bianconeri to hand Napoli a €90 million fee and sign the Argentinian striker to a five-year contract.

A release clause in his deal with the Partenopei allowed Juve to do so without even entering into negotiations, sparking a bitter war of words with Napoli that continues even today. That hasn’t stopped Higuain from doing what he does best this term, his current tally standing at a combined 21 goals in 29 Serie A and Champions League appearances.

Nothing in those opening two paragraphs is news, nor will it come as a surprise to anyone with even a passing interest in European football. Indeed, since he signed for Real Madrid back in December 2006, ‘El Pipita' has made finding the back of the net his calling card, plundering almost 250 career goals over the following decade and earning a reputation as one of the game’s deadliest finishers.

Yet watching him in action for the Bianconeri and listening to his new team-mates talk about what it is like to play alongside him, it is impossible not to be impressed. Simply put, he lives to score goals. You know it, I know it, and terrified defenders who genuinely have no way of stopping him doing so know it.

“I didn’t have a relationship with him before he came here,” Patrice Evra said before he moved on to Olympique Marseille. “But he’s the guy who goes crazy if he doesn’t score, it’s in his nature. I remember a game when we were both on the bench and he was biting his nails. He told me: ‘When I come on, I MUST score!’

That tension — the disgust and disdain Higuain carries around the pitch before he scores — is palpable every time he steps on the pitch. Before he gets his name on the scoresheet he stalks around the pitch, muttering under his breath and occasionally out loud, cursing the sky and remonstrating with team-mates who fail to pick him out with a pass.

He gets angrier and angrier — mostly with himself — the more time ticks away, but rather than affecting his impact on a game that frustration seems to drive him to seek out the half-chance he needs. Then it happens. An unexpected burst of acceleration, a perfectly timed run that brings him to the exact spot at the perfect moment and freezes his would-be marker, Higuain once again leaving the defence trailing in his wake and the opposition goalkeeper sprawling.

Often before the ball even crosses the line he is wheeling away to celebrate joyfully, embracing those team-mates who helped create his latest goal and relishing the adulation showered upon him from the stands. The very best strikers often discuss having goals in their blood, but to Higuain they seem more like a drug, the man himself feeding off them and suffering like an addict craving his next hit and willing to do whatever it takes to get it.

Take his performance against title-rivals AS Roma in December, for example. With just 14 minutes played, Higuain picked up a pass from Sami Khedira, dumped Daniele De Rossi on his backside and drove at the heart of the Giallorossi defence. Kostas Manolas panicked and went to ground too early, his indecision allowing the Juve man time and space to unleash an unstoppable shot beyond Wojciech Szczęsny.

Three points and domestic superiority cemented yet again, fans at Juventus Stadium – the same supporters who booed him vociferously from the Curva Sud when he played there in Napoli’s sky blue shirts – now appreciate just how special a player Higuain truly is. Seeing him pull on those famous black and white stripes every Sunday is to enjoy the work of a man who has worked tirelessly to improve every facet of his play.

Last season, he scored so many goals because Maurizio Sarri’s side played solely to make chances for him, Higuain averaging a league-high 5.2 shots per game. With other attacking options around him, that figure has dropped back to a more reasonable 3.2 with Juventus, hitting the target with 57% of those attempts and scoring in the biggest games and most vital moments. 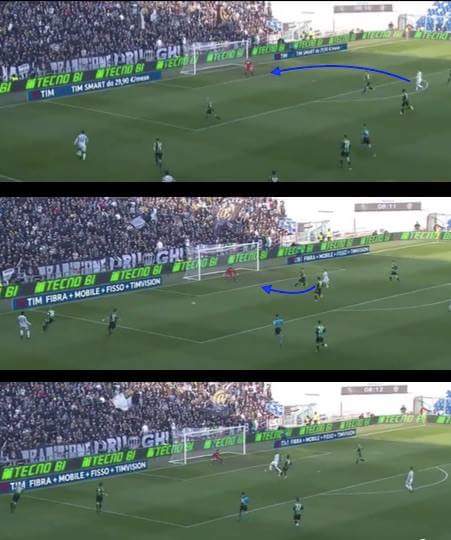 Yet if Higuain’s impact in Turin is to be fully appreciated, one must look beyond the most obvious highlights. A performance in a 2-0 win over Sassuolo last month showcased many of his best attributes, with an off-the-ball run for the game’s opening goal chief among them. Appearing to drift towards the far post as Alex Sandro drives forward, his burst of pace to get between two Neroverdi defenders and turn the ball home was incredible to witness and is a constant hallmark of his play.

They thought they had him well-covered, but Higuain was merely waiting for the last moment to strike and made doing so look remarkably easy. He wasn’t finished however, as just a few minutes later he pressed Paolo Cannavaro high up the pitch, turning the ball over before playing an excellent pass to Sami Khedira to secure the win. That effort has rarely been seen from him before, but he and Juventus know that even games against a well-respected Serie A opponent is not how their time together will ultimately be judged.

His brace against minnows Cagliari last weekend was again simply Juventus doing what Juventus do as they racked up another Serie A victory. But even scoring in their next away trip – a visit to FC Porto’s Estádio do Dragão – would not be enough for those who label him a choker. Endlessly reciting his failures in an Argentina shirt, they have plenty of evidence to support their claims and it does not need to be rehashed here.

Fans of the Bianconeri will still rightly celebrate a sixth consecutive Scudetto should he fire them to that historic accomplishment, but let’s be honest about what is happening here. The Turin giants did not spend €90 million on one player to help win a trophy they have won for half a decade without him, they paid it in the hope he can help deliver on a much bigger stage.

Gonzalo Higuain scores goals, but unless they come in a Champions League Final, anything he does for Juventus will be largely overlooked. That is a harsh reality and an incredibly difficult task, but one which he seems perfectly ready to accept and perfectly equipped to accomplish.

Discover the story of Omar Sivori, one third of Juventus' famous forward line that would become known as ‘Il Trio Magica'.