Gonzalo Higuaín, Argentina’s great scapegoat, has retired from international football. He admitted himself the news would come “to the delight of many people”.

It is not difficult to empathise with the 31-year-old, who has found himself repeatedly criticised by fans of the national team for a hat-trick of high-profile misses. They stand as a constant reminder of what some perceive to be his failure in the blue and white of Argentina.

“My time with Argentina is over,” Higuaín said. “Thinking things through in-depth, my time is up. Now I will only look at it from the outside. I have spoken to [the manager, Lionel] Scaloni and told him my point of view.”

If it is possible to look past the low moments – the one-on-one miss against Germany in the 2014 World Cup final and the squandered chances in Copa America finals – Higuaín’s international career was largely successful.

He scored 31 goals in 75 appearances for the Albiceleste, at a rate of 0.41 per game. Only five players – Gabriel Batistuta, Hernán Crespo, Sergio Agüero, Diego Maradona and Lionel Messi – managed more.

Often, the goals were scored in important games, too. He hit 23 of them in tournament football; the World Cup, Copa America and World Cup qualifiers. He scored a memorable goal in the 1-0 quarter-final victory over Belgium in 2014, quickly forgotten when Argentina needed someone to blame for defeat against Germany in the final a week later.

As seems to be the way in modern football, everything is placed out of context. Higuaín, and Higuaín alone, is to blame for Argentina’s dearth of silverware; his misses cost Messi a World Cup and a Copa America.

There is, of course, more to it than that. But reductionism is rife in both the club and international game. Higuaín, for daring to slip up on the big stage, has been condemned, labelled a “bottler”.

Who can blame him, then, for hanging up his boots early?

“People remember the goals I missed and not the ones I scored. I’m sure everyone celebrated against Belgium,” he said. “When you criticise someone maliciously, it hurts everyone. I saw how much my family suffered, but I gave everything for the national team.

“It’s one thing to say that we did not achieve our objectives, but when people talk about failure it’s very hard.”

That Higuaín racked up so many appearances for Argentina is evidence in itself of what he brought to the team. He would not have been such a regular inclusion under several different managers had they not valued his contribution.

Higuaín was a constant, too, in a squad filled with attacking talent. He had to compete with Agüero, Carlos Tevez and Mauro Icardi. But there was very little praise for such consistency. A player who became only the third in Argentina’s history to hit a hat-trick in the World Cup finals, who had scored so many goals at club level for Real Madrid, Napoli and Juventus, was made into a scapegoat.

In the 2016 Copa America final against Chile, Higuaín went through on goal with only Claudio Bravo to beat. But he clipped the ball inches wide of the far post. Argentina lost the game and the abuse became more personal.

“I was on the verge of giving up playing,” he said in a 2018 interview with TNT Sports. “I was close, but [my mother] told me not to, that I should carry on. If it were down to me I would have quit.

“I would have left football, which is something I love, but I love her more. She told me that I should look forward because she wouldn't let me leave something I love for her.” 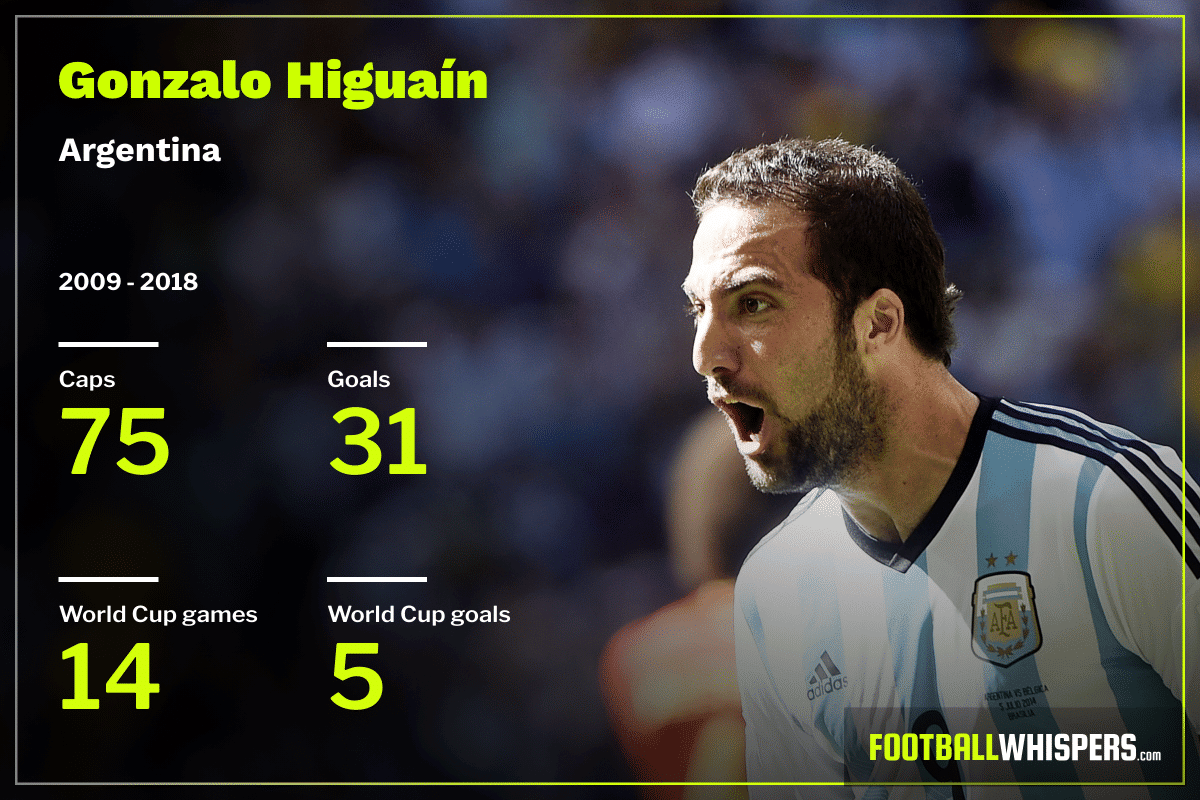 Now, Higuaín has quit. He says he plans to spend more time with his family, with his daughter. The striker added: “I feel that I gave my country everything I could. I’m fully focused on my commitment to Chelsea. The Premier League is amazing and I really want to enjoy it.”

It is not the first time an Argentine player has felt under pressure to retire. Messi, after defeat to Chile in 2016, briefly quit the national team before returning. The almost hysteric level of expectation, and the pervasiveness of social media, can make the criticism overwhelming.

Higuaín, clearly, has had enough. But he should not be remembered for the goals he did not score. Perhaps, a few years down the line, Argentina fans will appreciate him as one of the players who helped the country to its first World Cup final in 24 years.