Rafael Benítez's decision to stay with Newcastle United after their relegation from the Premier League two seasons ago instantly endeared the Spanish tactician for the St James' Park support.

Not only had this Champions League-calibre manager elected to stick with a the club through a difficult period on the pitch, he also had to battle with difficult off-field circumstances, feeling he wasn't sufficiently backed in the transfer market by owner Mike Ashley, all amid swirling speculation over a potential takeover.

Through it all, Benítez kept his head and focussed firstly on getting Newcastle back into the Premier League, winning the Championship at the first attempt, and now aiming to cement their top-flight status this season.

The former Liverpool and Real Madrid boss guided his side to a miraculous start to the campaign, too, rising to seventh in the table and allowing Magpies fans to dream of European nights next term.

However, Newcastle's early-season form has faded drastically. They now sit 13th, which, on first glance, still appears to represent an excellent return to the big time. But they are only two points ahead of 18th-placed Stoke City – their last opponents – whose own form is such a concern that manager Mark Hughes received his p45 at the weekend following a humiliating FA Cup defeat to League Two Coventry City.

It took Newcastle until the third game of reason to record their first points, picking up an emphatic 3-0 victory over West Ham United after losses at the hands of Tottenham Hotspur and fellow newcomers Huddersfield Town. But then they were off an running, picking up 14 points in seven games, taking them to seventh after nine fixtures.

That's when things started to turn for the North East side, though. Defeat to high-flying Burnley started a dismal run of nine league outings without victory, picking up just a single point during that bleak period. Losing to Manchester United, Chelsea, Arsenal and Liverpool would have been expected. But the same can't be said of losses to Bournemouth, Watford, Leicester City and Everton (all at home).

Lacking a prolific Premier League-level striker, Newcastle's survival hopes were always going to be pinned on Benítez's ability to organise a defence and plan tactically to exploit the weaknesses of opponents. And, for nine games, it worked a charm.

By the time they had beaten Crystal Palace on October 21, the Magpies were averaging 1.56 points per game. Their stubborn defensive set-up saw them average more shots per game than they conceded during this period (13 to 11.33), while scoring 1.1 goals per game and conceding just 0.89.

Since then, though, like a creaking damn struggling to hold back a river's relentless flow, cracks have emerged in Benitez's backline. In the 13 league games since the Palace win, they have conceded 1.69 goals per game. Not a disastrous average but still twice the rate they were previously shipping goals at.

Equally as troubling, their attack has grown yet less efficient, when it was hardly firing on all cylinders to begin with. In the last 13 Premier League games, they have scored at a rate of just 0.77 goals per game.

The issues appear to be either systematic or quality-based, too, rather than simply bad luck or a handful of particularly sub-par displays skewing the figures. Since the ninth fixture of the campaign, Newcastle's shots conceded has risen to 14.77 per game, while their shots taken has fallen to 11.69 per game.

The expected goals (xG) numbers tell the same story. For the first nine games, their average xG was 1.21, while their expected goals against (xGA) was 1.09. This broadly shows that, on average, they were creating a better quality and/or volume of chances than they were giving up.

Since then, though, the reverse is true, with a miserly average xG of  0.86, against an xGA of 1.62. Simply put: the rate at which Newcastle are currently creating and conceding chances is not sustainable if they hope to avoid relegation back to the second tier. 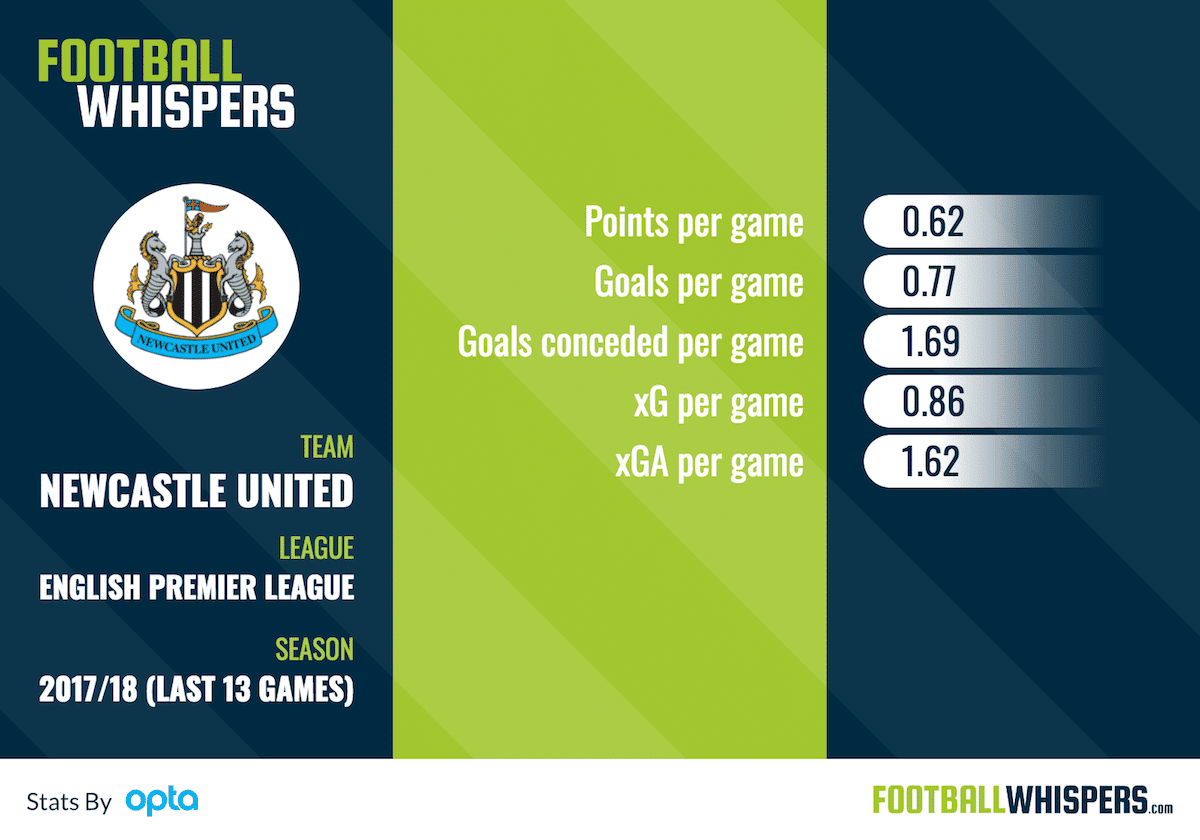 There is hope, though: seven points from the last four games (two wins, one draw and one defeat) have given Newcastle‘s recent form an altogether healthier complexion. More will be needed if they are to avoid a battle against the drop in the remainder of the season, however.

In truth, rather than any major failing of the manager or the players, Newcastle's mid-season slump is likely reflective of a side regressing to their mean after overshooting expectations early on. Now experiencing a metaphorical adrenaline dump, all that remains is a squad ill-equipped to strive for a finish well clear of the bottom three.

If a reversal of fortunes is to be achieved, action in the January transfer market will probably be required. According to the Newcastle Chronicle, though, worryingly, the takeover talks seem to have reached a stalemate.

“Simply, the two parties left things after the last round of talks with a distance between them on valuation. £50m is the claimed figure which is about right.

“There are areas of agreement which point to something getting agreed in the medium-term, but until that gap is bridged one way or another, it’s not going to go through.”

This leaves Benítez in a limbo: the current owner won't want to dip into his pocket to fund the transfer kitty of a club he hopes to soon have no financial interest in; while the prospective new regime will be reluctant to splash any cash before the takeover is complete.

An unenviable position for Benítez. But if anyone has the tactical nous to paper over the cracks that are quickly becoming chasms, it's him.