How do Chelsea replace Eden Hazard? It's a question the club have always dreaded but knew, eventually, would need answering.

The Belgian's move to Real Madrid was confirmed last week, drawing the curtain on a brilliant seven-year spell at Stamford Bridge, a spell that yielded six major honours and dozens of individual accolades, including the PFA Players' Player of the Year award in 2015.

Hazard scored 110 goals and notched 65 assists for Chelsea but, in truth, his influence is bordering on immeasurable, extending far beyond merely scoring or creating chances. Since 2012, he's been the main attraction, the star man, the one who brought fans to the stadium and to their feet as he danced his way around defenders.

But long-term planning is essential in football at the highest level and not even the most ardent Chelsea fan would have expected to see Hazard in their club's blue in 2020.

Of course, a potential transfer ban complicates matters. Whereas the initial £89million windfall from his sale would have made shopping for reinforcements relatively straightforward, if their appeal to the Court of Arbitration for Sport fails, they face the prospect of not being able to sign anyone until next summer.

If the ban is overturned, however, reports have emerged claiming they will pursue the signature of Valencia winger Gonçalo Guedes.

What a hit from Gonçalo Guedes! ? Portugal lead in Porto.https://t.co/bsDUP5Zik8

Even with the arrival of Christian Pulisic and Callum Hudson-Odoi's captivating talents, the 22-year-old Portugal international is an intriguing possibility.

But with a reported £62million price-tag, would Guedes be a wise investment for the Europa League holders? Let's take a look.

Despite his tender years, Guedes has already experienced a storied career. Having broken through at Benfica as an exciting teenager in 2015, he helped his boyhood club win the Primeira Liga title in 2015 and 2016. Then, after an eye-catching start to the 2016/17 campaign, he joined Paris Saint-Germain in January following Julian Draxler's arrival in a busy month for the French giants.

With elite players vying for starting spots, however, progress in Paris was slow and, to aid his development, he was loaned to Valencia for the 2017/18 season.

It was there, at the Mestalla, that Guedes emerged as one of European football's most exciting prospects. Immediately after scoring his first goal in Los Che's 6-3 win over Real Betis, he followed it up with two goals and an assist in the 4-0 defeat of Sevilla. Sid Lowe described him as a ‘sensation'. Graham Hunter said he ‘is football', arguing that his exclusion from the Golden Boy long list was an  'embarrassment'.

Guedes thrived on the left flank of Valencia's counter-attacking 4-4-2, ending the season with five goals and nine assists.

However, that excitement was soon replaced by confusion. After a disappointing World Cup, for most of the 2018/19 campaign, he cut a disconsolate figure, a shadow of the thrilling winger who'd taken Spain by storm. His confidence was shot and, having joined Valencia on a permanent basis for £35.5million, the pressure intensified as his side struggled in LaLiga.

Injury stunted his development, a groin problem sidelining him for two months from December. But his recent form suggests he's recovered from a difficult period to re-establish himself as one of Spain's most exciting wingers.

Guedes finished the season in remarkable form. His first goal in March was followed by a run of seven goals and two assists in nine appearances in all competitions, crowning his renaissance with Portugal's Nations League-clinching strike against the Netherlands. 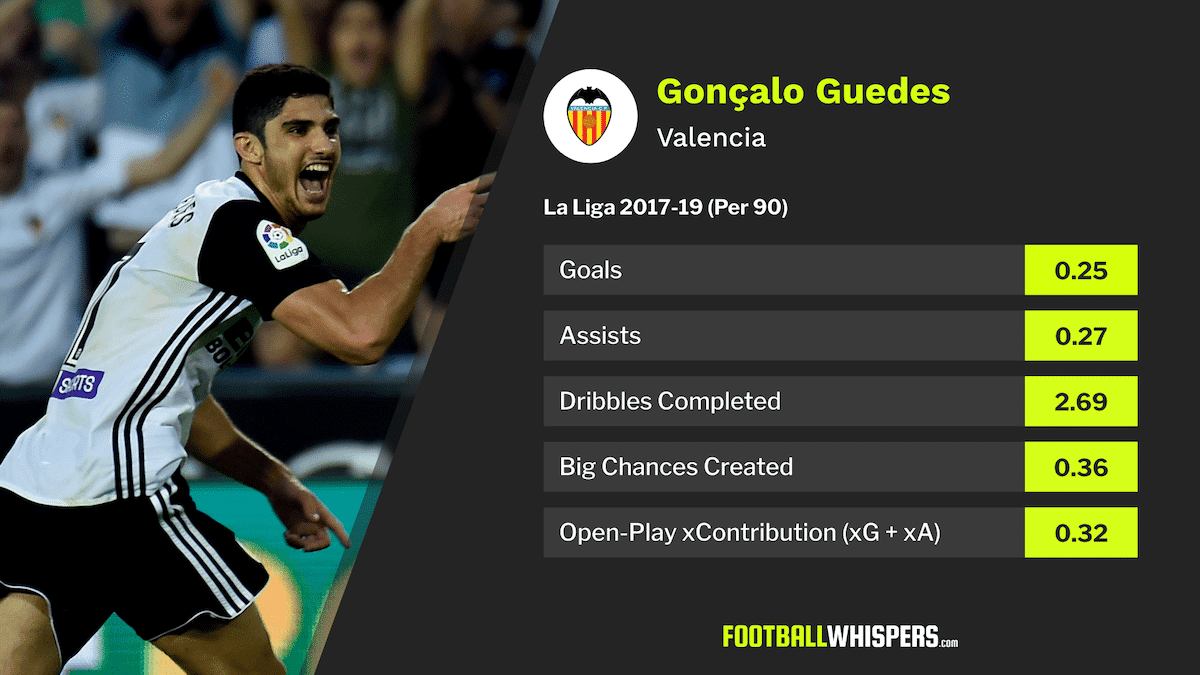 The powerful winger would struggle to match Hazard's brilliance, but his stats suggest he could lift Chelsea's frontline. A consistent threat, he averaged 0.36 goals per 90 minutes in the 2018/19 campaign, twice as effective as his 0.18 in 2017/18. He also continued to beat defenders with relative ease, averaging 2.2 dribbles completed per game to rank him 15th among LaLiga's midfielders.

That may pale in comparison to Hazard's 4.24, but it surpasses Willian (1.7). Pedro shades the Portuguese with 2.27, while Pulisic's 4.09 for Borussia Dortmund looks comparatively impressive.

Guedes is explosive, sometimes unstoppable even, but it's difficult to gauge how he would fare within a different system. Under Maurizio Sarri, Chelsea have adopted a more possession-based 4-3-3 and, while the former Benfica man would offer a different dimension with his ability to either drive forward down the flank or make an angled run inside, the fierce competition for places – Pulisic, Hudson-Odoi, Willian and Pedro can all be deployed out wide – may adversely affect his impact.

Using Football Whispers' player persona model, we can glean the similarities between him and Pulisic.

Having spent £58million on Pulisic, an even greater outlay on another wide player perhaps wouldn't be the shrewdest move for Chelsea.

Although Hazard's departure leaves a sizeable void, the Blues should place their faith in the burgeoning talents of Hudson-Odoi and Pulisic who, despite some struggles at Dortmund, remains a hugely exciting proposition.

Guedes' talent is undeniable. A proven game-changer, he has the ability to reach the pinnacle of the game, but that doesn't necessarily mean Chelsea need to buy him. Even without Portugal's Nations League hero, an attacking future shaped by Hudson-Odoi and Pulisic offers extraordinary promise.