Gombe United hosts Dakkada in Round 33 of NPFL fixture this Sunday 12th June. Dakkada is struggling to shake off a relegation tag ahead of this match. But can they also battle a poor away from to get some points in this trip to Gombe? We have the finer details of this as well as free betting tips in this post.

This will the second time Gombe United plays against Dakkada in Nigeria’s top football league, NPFL. The reverse game was the first encounter between these teams and it ended 1-0. Place your bet on our best free predictions for this game as follows:

Gombe to complete the double against Dakkada

Gombe defeated Dakkada 1-0 in the reverse meeting. The 1-nil away win for Gombe was massive and this second meeting of the season could be another chance to prove that they are the dominant side after just two meetings in the history of the teams. Gombe United never lost in their last 8 home games. Moreover, the hosts have not lost a home match this season after bagging 11 wins and 5 draws so far. On the other hand, Dakkada is not only ranked second-last in the NPFL but also the worst team in away form.  The visitors have 1D and 14L in 15 trips.

We expect goals on only end of the pitch in favour of Gombe United. The hosts have scored 24 and leaked 7 in 16 home games, a sharp contrast to Dakkada’s away form. The visitors have scored 7 and leaked 33 goals on the road. We don’t think Dakkada will score in this trip.

We have a summary of the best odds, the latest H2H sand current team for Gombe United and Dakkada in the tables below.

The second meeting between Gombe United and Dakkada is set to be a grueling battle for supremacy. After defeating Dakkada away from home in the reverse game, Gombe United now have home backing to their advantage. The hosts are 9th on the NPFL table and 7 points adrift of third-placed. A win in the remaining six games could change the fortunes of Gombe. However, few wins on the road for most NPFL teams could be a stumbling block for Gombe in the quest for a top three place.

The hosts have 12W, 8D and 12L in 32 games so far. On the contrary, Dakkada has 11W, 3D and 17L in 31 matches. That means Dakkada has a game to spare ahead of this trip to Gombe. But we don’t expect a strong opposition from the visitors after collecting only a point in 15 trips. 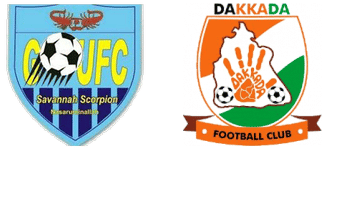 Which stadium is the match venue?

What time will Gombe vs Dakkada game start?

How many goals have these teams conceded so far?

Gombe has leaked 31 goals while Dakkada has let in 44 goals.