Given the pitch invaders and vociferous protests against the board, it's hardly unsurprising Joe Hart's return to the West Ham United side wasn't the major talking point following the 3-0 defeat to Burnley.

The England goalkeeper hadn't featured in a Premier League game under David Moyes, a run which stretched back to November. But the Scot dropped Adrián to the substitutes' bench and put his faith in the experienced England international. It didn't go well.

The Manchester City loanee had little chance of stopping Burnley's first two goals, but the third was entirely avoidable. Johann Berg Gudmundsson's 20-yard shot was powerful yet straight at Hart. But he failed to collect the ball, it fell to Chris Wood and he fired home.

That was just the latest in a long line of mistakes by Hart. In Premier League games he's started for the Hammers, they have an xGA (expected goals against) of 23.83. Yet Hart has conceded 33 times. No other top flight goalkeeper is underperforming their xGA to such an extent.

His career has nosedived since Pep Guardiola arrived at the Etihad Stadium in the summer of 2016 and decided the two-time Premier League winner wasn't good enough.

His loan spell at the London Stadium has been as underwhelming as his stint at Serie A side Torino last term. The Hammers will not make his deal permanent and Hart will return to Manchester with his career in limbo.

That will also mean the Hammers have to find a new goalkeeper. Adrián has had spells during his time in East London where he's performed well, but there's enough evidence to suggest he isn't good enough to be the club's No.1.

With this in mind, we have identified five goalkeepers the Irons should target this summer. They are all obtainable targets but only if the Irons secure their Premier League status, which is by no means a guarantee.

West Ham have had mixed success when signing players from the Bundesliga in recent seasons but they should consider making a move for Finland international Hrádecký.

The 28-year-old goalkeeper has established himself as one of the most consistent in the German top flight since he joined the club in 2015 from Danish side Brøndby IF.

Hrádecký is strong, athletic and an excellent shot stopper. Standing 6ft 3ins he wouldn't be overawed by the physicality of several English sides from set-pieces and is agile enough to quickly get down to low shots. 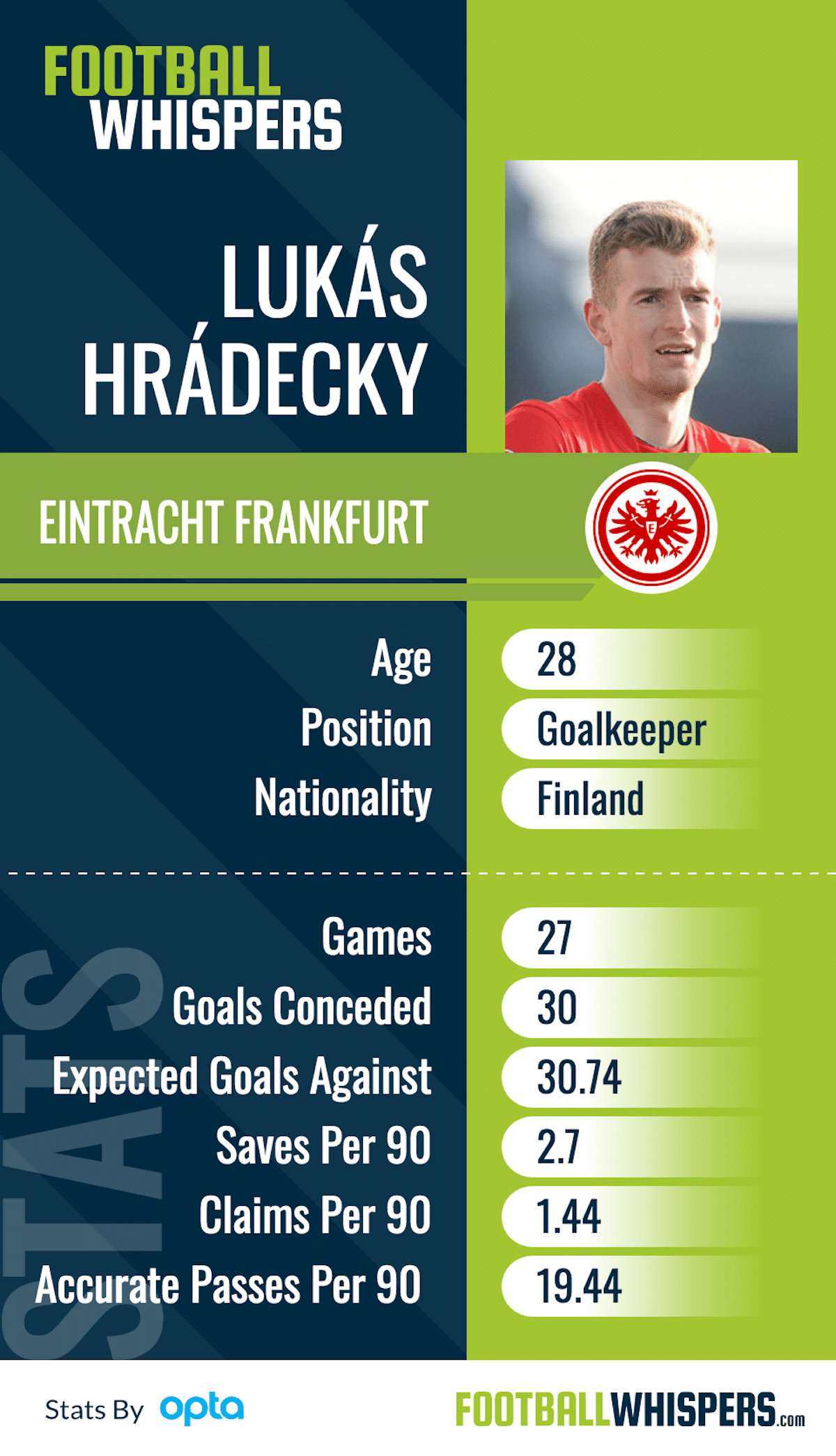 His consistency is evident in his xGA this term. Hrádecký is expected to have conceded 30.74 goals in the Bundesliga this term, he has been beaten on 30 occasions.

What makes him even more attractive to prospective suitors is his contract expires in the summer. He's been unable to agree a new deal and looks set to leave on a free transfer. West Ham could take advantage and land themselves an excellent goalkeeper.

It wasn't long ago that Asenjo was viewed as Spain's future No.1 goalkeeper. That was certainly the belief when he signed for Atlético Madrid from Valladolid in the summer of 2009.

He began the 2009/10 campaign as the club's first-choice stopper but was dropped after making high-profile mistakes. The man who took his spot in the side? A young David de Gea.

Unsurprisingly Asenjo didn't win his place back and in 2013 he joined Villarreal on loan and then permanently the following summer. And at the Estadio de la Cerámica, the now 28-year-old has re-established himself as one of the division's best goalkeepers.

Injury kept him out for much of the first half of this season but he returned to the side in December and hasn't been displaced. He's conceded 15 goals in the 15 La Liga games he's featured in yet the Yellow Submarine's xGA is 20.54, so Asenjo is making saves he isn't expected to make.

That's a marked difference compared to Hart and even Adrián, whose 20 goals conceded in the Premier League was in line with his xGA of 20.70.

Unlike Hrádecký Asenjo wouldn't come cheap but Villarreal are a club who always sell for the right price. While his buyout clause hasn't been confirmed, a bid of around £20million is likely to be enough for the La Liga side to sell.

It would be an ambitious move but those are the kind of deals West Ham fans were sold when they left the Boleyn Ground for the London Stadium.

Still just 19 years old, Lafont is regarded as one of the most promising players in Europe. He has already racked up almost 100 appearances for Toulouse and has represented France at every youth level – he is currently part of the Under-20 squad.

And what makes a potential deal more enticing for prospective buyers is that the French club may have to sell this summer if they're relegated. Toulouse are currently 17th in Ligue 1, just a point above the drop zone. If they slide into Ligue 2 their most sellable asset is the youngster.

He wouldn't come cheap and there are big clubs interested; Arsenal are said to be considering a move for Lafont to replace the ageing and out-of-form Petr Cech. However, even if he cost in excess of £20million, it would be worth it.

He has outperformed his xGA of 42.01 this season – the young stopper has conceded 41 goals – and is confident enough despite his tender years to organise the defence in front of him.

Best of all, Lafont should only get better. He looks on course to play for one of Europe's top clubs but isn't ready yet.

A few seasons at a ‘smaller' club, such as West Ham, would be a good test of his ability and mentality. While he wouldn't be a long-term solution for the Hammers, they could enjoy two or three seasons with Lafont in goal before selling him on for a big fee.

At the Stadio Olimpico this season there is a goalkeeper who has established himself as one of the best in the world. A man who has pulled off impressive save after impressive save and is as comfortable with the ball at his feet as he is with it in his hands.

That man is Liverpool transfer target Alisson, which is unfortunate for Skorupski. The Polish goalkeeper has made just a single appearance this season, against Torino in the Coppa Italia in November, and has spent the rest of the campaign stuck on the bench.

Skorupski is not a bad goalkeeper, he's just behind an exceptional one. He is likely to try to change that this summer with a move away from Roma, and West Ham should revive their previous interest. 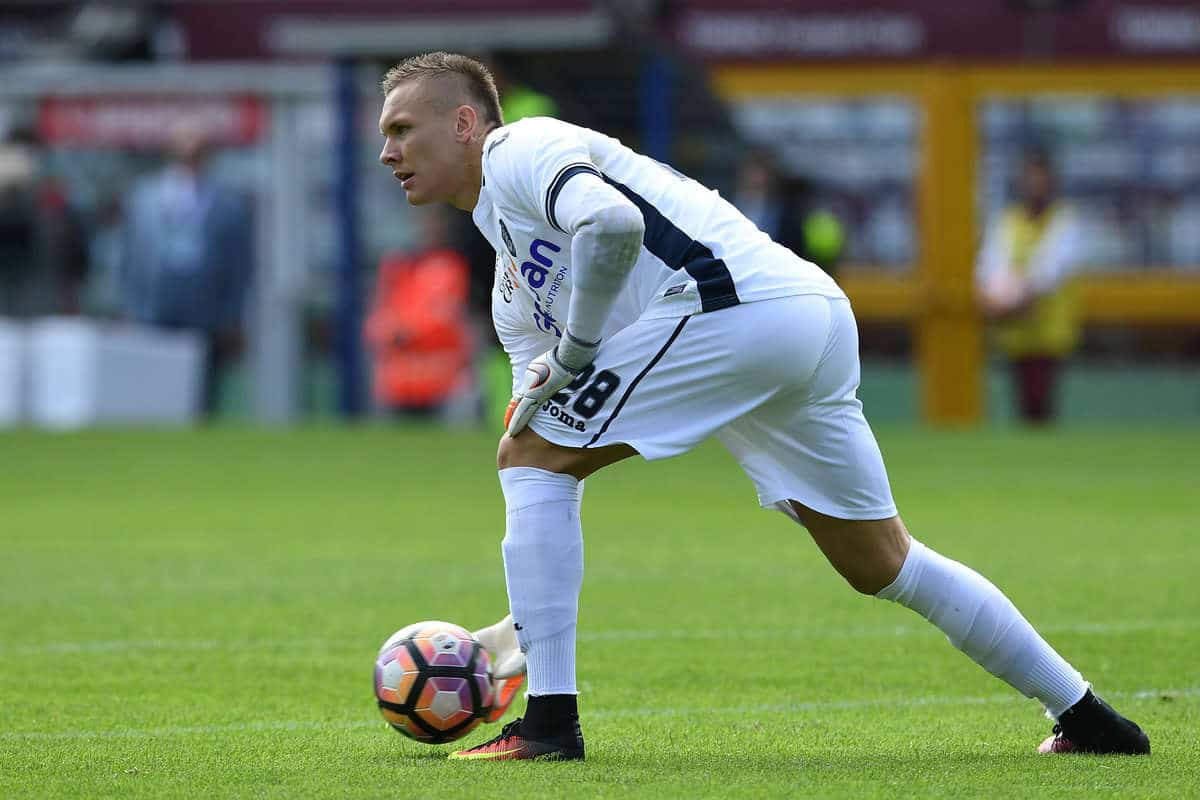 Last term the 25-year-old was on loan at Empoli, who suffered relegation after an 18th place finish. The Poland international, however, was blameless.

He kept ten clean sheets and made a total of 144 saves over the course of the campaign, the second highest total in Serie A behind Milan's wonderkid Gianluigi Donnarumma.

More impressively, however, was Skorupski's outperformance of his xGA. He was expected to concede 63.81 goals in his 35 league games last term but was only beaten on 56 occasions – no other goalkeeper outperformed their xGA to such an extent over the same period.

What helped that figure is his impressive record when facing penalties. Last season Skorupski faced nine penalties in Serie A, he saved four of them.

Roma were expected to cash in on the goalkeeper last summer for as little as around £5million, but Wojciech Szczęsny, who was on loan at Roma during the 2016/17 campaign, opted to join Juventus. Alisson was promoted to No.1 and Skorupski was made No.2.

It's likely I Giallorossi would be willing to cash in on their second-choice stopper for the right price, one that wouldn't be beyond West Ham should they survive. Skorupski could be the solution to their goalkeeping woes.

A year ago it would've been unthinkable that the Clarets would let Heaton move on. But 12 months is a long time in football and Burnley now have a new No.1 on their hands in Nick Pope.

Heaton has spent much of this season ruled out with a shoulder injury – he hasn't played since September – and in that time he has become yesterday's man at Turf Moor.

Pope has starred for Sean Dyche's men, as discussed here, and that could mean Heaton is available this summer for the right place.

Yes, he wouldn't come cheap and it could be seen as a gamble given he's barely played this term, but the 31-year-old was one of the Premier League's most consistent stoppers prior to his injury.