It’s the end of an era for Pepe Reina and Napoli. This week the Spanish goalkeeper, who is out of contract at the end of the season, agreed a contract with Milan according to Gazzetta dello Sport.

The 36-year old has agreed a deal until 2020 that will see the former Liverpool stopper become Gianluigi Donnarumma’s understudy, leaving the Partenopei needing a new No.1 going into next season.

Corriere dello Sport have drawn up a list of contenders that are reportedly on Napoli’s shortlist, but do they fit and are they realistic? Football Whispers takes a look.

The 26-year-old German would certainly be a popular choice as his form for Bayer Leverkusen is turning heads all over Europe. As well as being wanted by Napoli, Leno is reportedly an Arsenal transfer target, meaning there is likely to be a tug-of-war for his services.

Averaging just 1.58 saves per 90 this season, Leno is protected by a miserly defence which has the joint fifth-best record with just 33 goals conceded in 26 Bundesliga fixtures. He makes 1.24 saves per goal and has kept ten clean sheets for Bayer.

Leno has all the traits of a top-class goalkeeper that would strengthen Napoli’s resolve but, more importantly, he is good with his feet and quick in his distribution. This is key for any keeper playing in a Maurizio Sarri team. The outgoing Reina is an expert in starting the play quickly from the back, allowing Napoli to counter quickly.

Third-choice for Germany behind Manual Neuer and Marc-Andre Ter Stegen, the two assets he is most lauded for are his courage and his penalty saving. Leno’s best season for the latter was 2013/14 when he stopped five of eight spot kicks.

On top of that useful knack, Leno is immense bravery and always puts his body on the line – even playing with a broken nose against Atletico Madrid in the Champions League.

However, he has also made a few high-profile errors – just watch Germany’s 3-2 win over Australia in the 2017 Confederations Cup. But these are few and far between and he would be an statement purchase if Napoli could conclude a deal.

The Genoese goalkeeper is perhaps the most realistic target and exciting option for Napoli. It is somewhat surprising the 6ft 2ins stopper hasn’t left the port city yet, especially when he has performed with such consistency for so long, but at 25 he still has time on his side.

Already, though, Perin resembles the perfect modern-day goalkeeper. He is quick off his line and, importantly if he were to move to Naples, boasts an impressive range of passing to envy that of Reina.

He is worked far harder than Leno, averaging 2.96 saves per 90 behind a Genoa defence which has been breached 28 times (fifth in Serie A) and concedes at a rate of 1.04 goals per 90 – the lowest of the three stoppers on this shortlist. His rate of 2.96 saves per goal is also the best.

Perin's upward trajectory for crosses is impressive when seen up close and perhaps his best asset is the fact that he is one of the best keepers in Europe at getting back up to make a second save.

With all those attributes why hasn’t he moved yet?

The answer is two-fold. Firstly, he has suffered two cruciate ligament injuries in as many seasons, something which could be off-putting to prospective buyers. However, he has recovered now and as as fit as ever.

Secondly, he is extremely loyal to Genoa. He is captain of his home-town club and refuses to forget the way they have stood by him through his injuries. That is underlined by an interview he gave to Gazzetta dello Sport in which he stated his desire to become a symbol of the club for years to come.

For Perin, that is more important than money and would be the biggest stumbling block for Napoli. 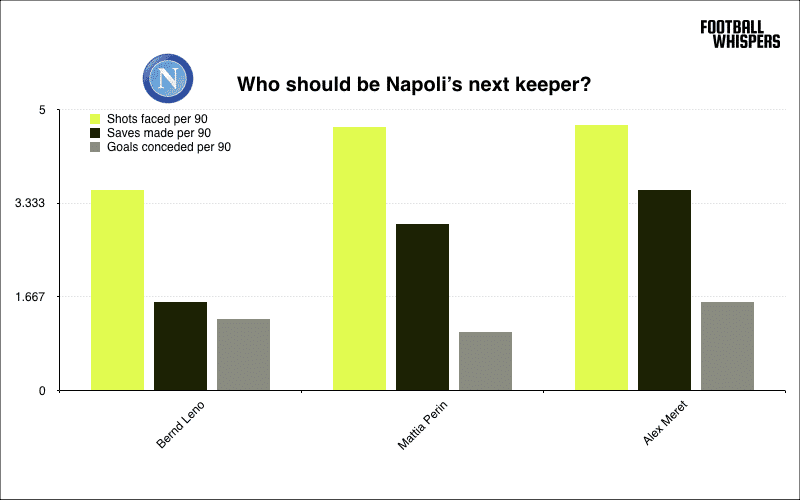 Meret is another keeper from Italy’s seemingly endless production line who is expected to have a big future. On loan from Udinese at newly promoted SPAL, the 20-year-old has not only showed confidence this term, but he has also developed a certain style and swagger.

His form has made him subject of Liverpool and Chelsea transfer rumours with Napoli also keen. A reported asking price of €17million would make him an affordable option, too, and a long-term heir to Reina.

Averaging 3.57 saves per 90, Meret comes out on top despite playing the fewest games of the three keepers Napoli are eying up. He concedes at the worst rate (1.57 per 90) but that is because SPAL have shipped the fourth-most goals (50) in Serie A.

At 6ft 3ins, Meret has made taking crosses an art form and when watching him it is evident he is highly strung; poised on the edge like a tennis player. For a 20-yea-old with fewer than 50 Serie A appearances to his name the Udine native has no lack of confidence either and there is frequently a swagger to his play.

The risk for Napoli and Sarri is that he is still very young for a goalkeeper. He only made his league debut last season at SPAL, helping the club to promotion from Serie B, and has just seven top-flight appearances to his name so far.

That isn’t automatically a problem. But for every Donnarumma there is the story of Simone Scuffet who was also highly thought of at Udinese but now behind 40-year-old Albano Bizzarri.

Even so it may be a gamble worth taking. The youngster could still be moulded and coached into Sarri’s ideal keeper and the Partenopei could be left ruing the one that got away if they do not act.