Arsenal went undefeated over the festive period but three draws from four matches isn’t what Arsène Wenger would have hoped for when looking at the fixtures. To make matters worse, the Gunners conceded eight goals in those games.

Then, to rub more salt in the wounds, two late penalties in games against West Bromwich Albion and Chelsea turned a possible six points into just two. Wenger has looked to blame the referee for these ‘soft' decisions while fans and the media have taken a closer look at Petr Čech.

The Arsenal keeper could've done much better for Roberto Firmino‘s late equaliser against Liverpool and he dived the wrong way for both penalties. In isolation the penalties aren't an issue but it's the fourth successive time he's gone the wrong when faced by a player from 12 yards out.

Eden Hazard‘s penalty was the 15th consecutive spot kick scored past him.

With this in mind, we've decided to take a look at which keepers in the Premier League are the best when it comes to saving penalties. To make it a little fairer, we set a limit of having had to face at least five penalties. This means Ederson, Karl Darlow, Mathew Ryan and Jonas Lössl aren't included.

Only eight goalkeepers save at least 20 per cent of the penalties they've faced in the Premier League.

Of the 12 penalties the Leicester City keeper has come up against he's saved three of them giving him a 25 per cent success rate. It's not a bad record at all, saving one of every four spot-kicks in the English top flight.

Lloris divides opinion. Some think he's part of an elite group of goalkeepers in the Premier League whereas others feel as though he's an accident waiting to happen. When it comes to penalties he's saved five of 18 which means he's stopped 27 per cent of them.

Now, Pickford comes in at third having saved 28 per cent of the penalties he's faced. However, the sample size for the former Sunderland keeper isn't the largest – facing just seven, but he's saved two of them 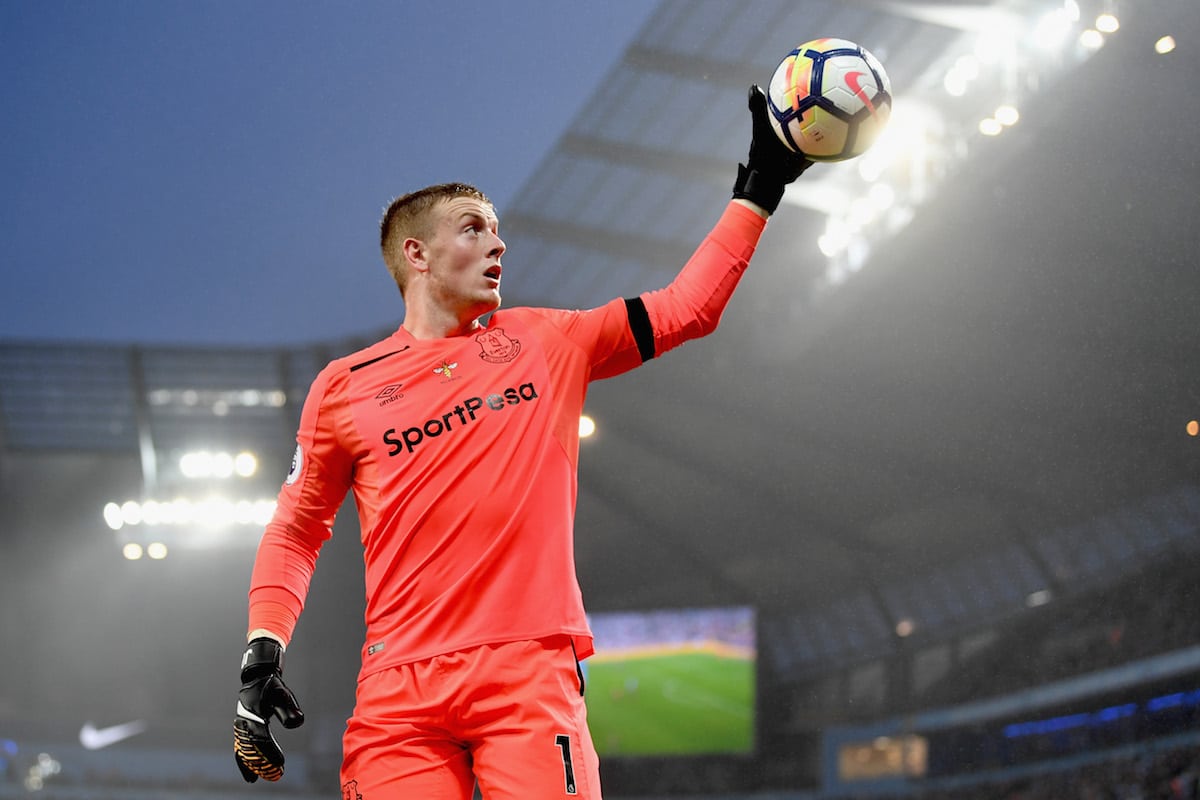 A shock name on the list is West Ham United‘s Adrian. He's only recently been brought back into the first-team in a move which has seen Joe Hart relegated to the bench. Adrian has saved five of 17, or 29 per cent depending on how you want to look at it. For added context, Hart has saved six from 24 which sees him come out four per cent down on his teammate.

The two English goalkeepers have identical records having saved three of ten penalties to give them a 30 per cent success rate. Both might not play again this season, though, with Nick Pope performing well for Burnley and Forster finding himself on the bench for Southampton after disappointing throughout the season.

Watford vice-captain Gomes impresses on this list. He's saved 11 of the 34 he's come up against to give him a 32 per cent success rate. He's an imposing figure between the posts and what's even more impressive is his he's been doing it for the best part of a decade now. He's consistent when faced with penalties. 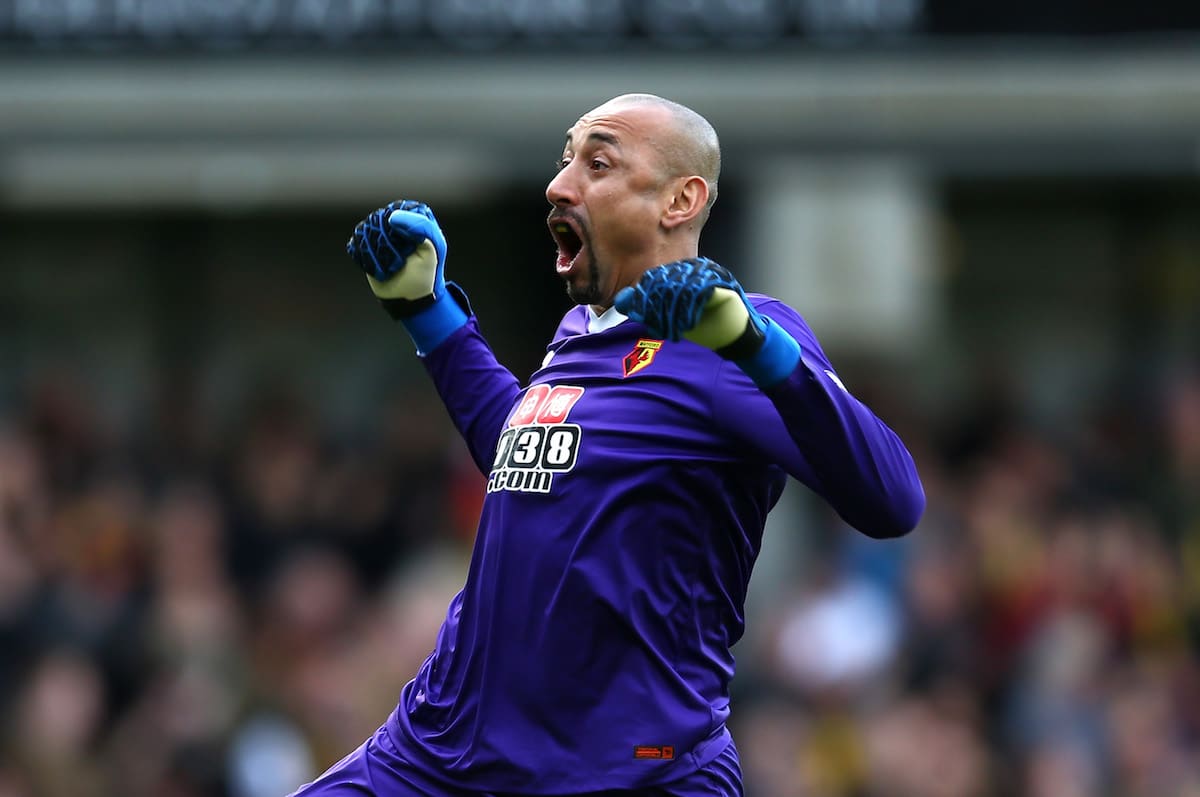 Mignolet came last on the table of goalkeepers when saves per goal are analysed but he tops the table for saves from the penalty spot. His success rate for penalties saved is 35 per cent having saved ten of the 28 he's faced. Liverpool fans might want a new No.1 but replacing what the Belgian offers during a penalty kick will be harder than you might think.

The full table can be found below: 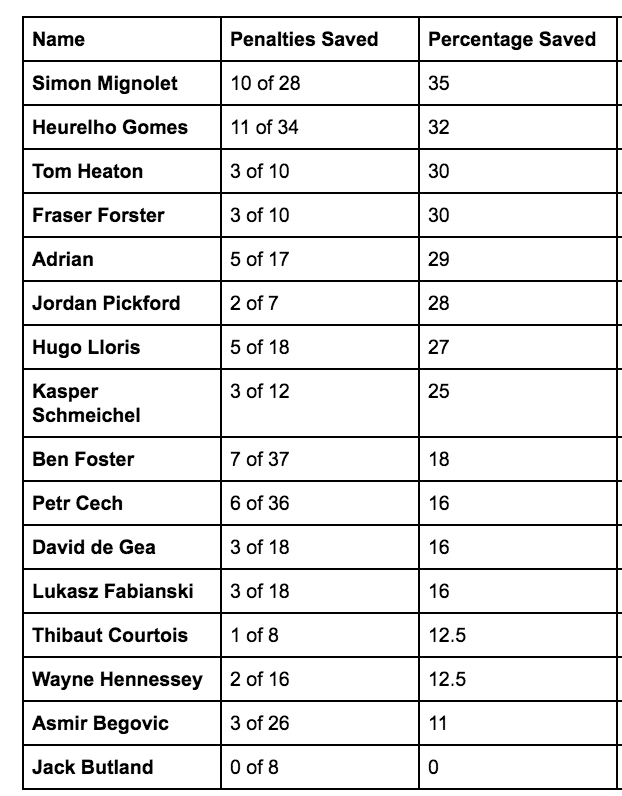