Alex Ferguson might well be remembered for his unprecedented success during his time at Manchester United, but for many what he achieved at Aberdeen on a rainy Gothenburg night back in 1983 was his greatest triumph of them all.

The Dons would lift both the European Cup Winners Cup and the Super Cup some 33 years ago as they conquered the best Europe could throw at them. Many sides would have been overwhelmed at facing one of European footballs big names, but not the men from the Granite City as the mighty Bayern Munich and Real Madrid were defeated by a Sir Alex Ferguson inspired side.

Ferguson was just 36 when he joined Aberdeen from St Mirren in June 1978 and quickly set about making an impact on the club. The first thing he did was to recruit Archie Knox from Forfar as his assistant and the pair were a formidable pair who quickly installed an ethic of discipline and hard work.

Aberdeen had won the Scottish league title for just the second time in 1980 and, as a result, qualified for the European Cup, although they came a cropper when they faced Liverpool, who had won the league the year before. The following season they defeated defending champions Ipswich in the UEFA Cup before their run came to an end against Hamburg in the quarter final. Having won the Scottish Cup in 1982, Aberdeen qualified for the Cup Winners' Cup – which was seen by many as the third most important trophy in European club football behind the European and UEFA cups.

The start of the 1982/83 season was greeted with a new sense of expectancy at Pittodrie and team-spirit was as high as anyone could remember. “Sir Alex knew he had a bunch of players there who were honest and he could trust but he had to get the best out of them,” explained former skipper Willie Miller. “He used different tactics to get the best out of different players. If a cup had to go flying then it had to go flying. It certainly worked.”

But their campaign got off to something of a stuttering start as Aberdeen lost their opening game of the season away at Dundee United. However, they would only lose another one of their next 13 games as the Dons established themselves as contenders for the title.

Despite taking 16 points from a possible 18 in their last six games Aberdeen would fall agonisingly short of winning the league that season, finishing just a point behind eventual winners Dundee United, but their disappointment at missing out on the league would be short lived thanks to an epic run in Europe. 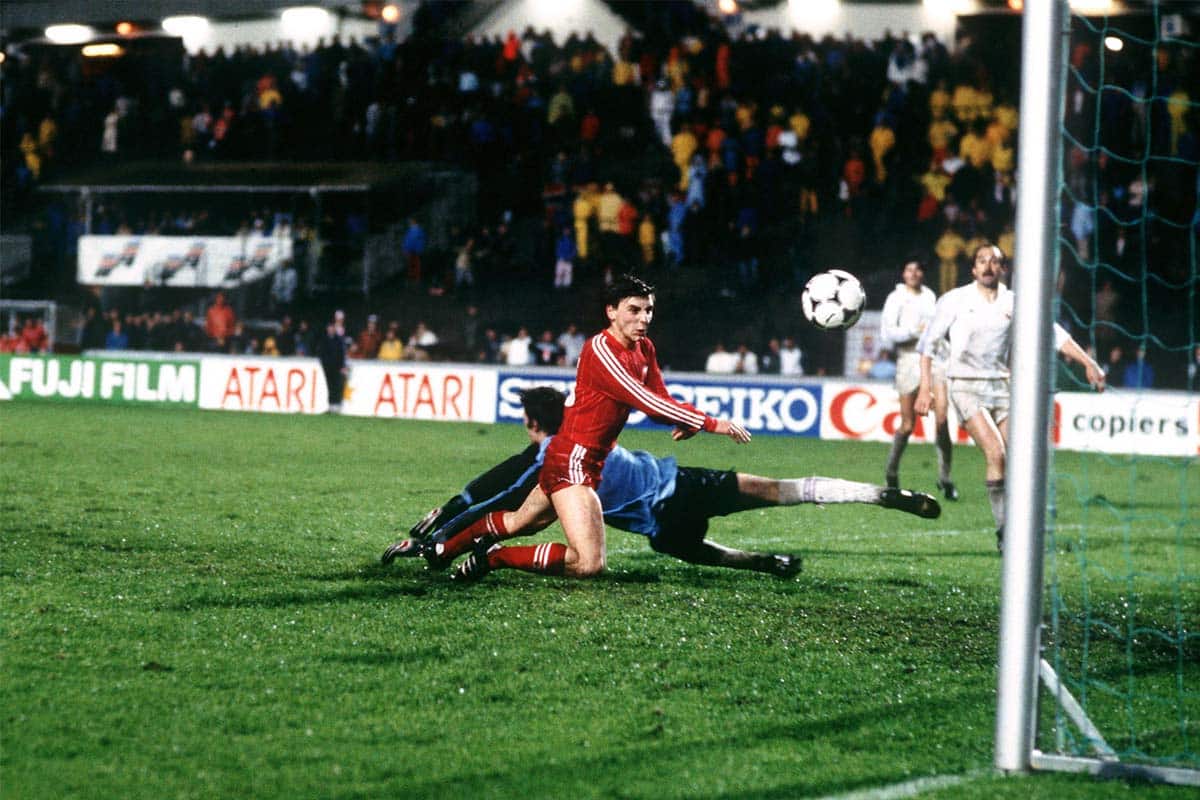 Their journey to the final in the Swedish capital had begun back in August against Swedish side FC Sion, who they demolished 11-1 on aggregate before more closely fought victories against Dinamo Tirana and Lech Posnan saw Aberdeen progress to the quarter finals where they would meet the mighty Bayern Munich.

After a 0-0 draw in Munich Ferguson was less than pleased. “When we drew 0-0 over there I was the only one who was unhappy because I thought we needed an away goal and should have got one,” he claimed. “We played really fantastic and were unlucky. We hit the post twice and were a better team.”

And his fears looked to have been realised when Aberdeen fell behind early on at home in the second leg before Neil Simpson scrambled an equaliser. Another goal for Bayern Munich seemed to put the game beyond Aberdeen, but, not for the first time, this Ferguson side was far from throwing in the towel.

The Dons got back into the game thanks to a free-kick trick that might have looked chaotic but was a move that had been rehearsed plenty of times on the training ground. Gordon Strachan and John McMaster both stood over the free kick on the edge of the box and then hesitated as though there was some kind of confusion. The German defenders fell for it and Strachan whipped in a cross which Alex McLeish headed in.

As a result the Germans started arguing with each other  and within minutes John Hewitt had scored Aberdeen's winner; Pittodrie erupted as realisation sank in that the club were heading to the semi final of a major European competition.

As it turned out that semi final was something of a formality and the Dons went on to complete a 5-1 demolition in the first game and thoughts turned to the final even before the second leg was completed, which they would lose 1-0. Aberdeen would now face giants of European football Real Madrid across the North Sea in Stockholm.

The Uvelli Stadium that night certainly suited the men from Aberdeen rather than the six-time champions of Europe as the rain poured down throughout the day in what was to be one of the biggest mismatches in European football it would appear. But the Aberdeen side were determined to use the shocking conditions to their advantage as the pitch became more sodden and full of puddles, “I could see the Real players looking across at us and some of them were laughing as if to say ‘look at this bunch here.’” Explained Alex McCleish sometime afterwards. 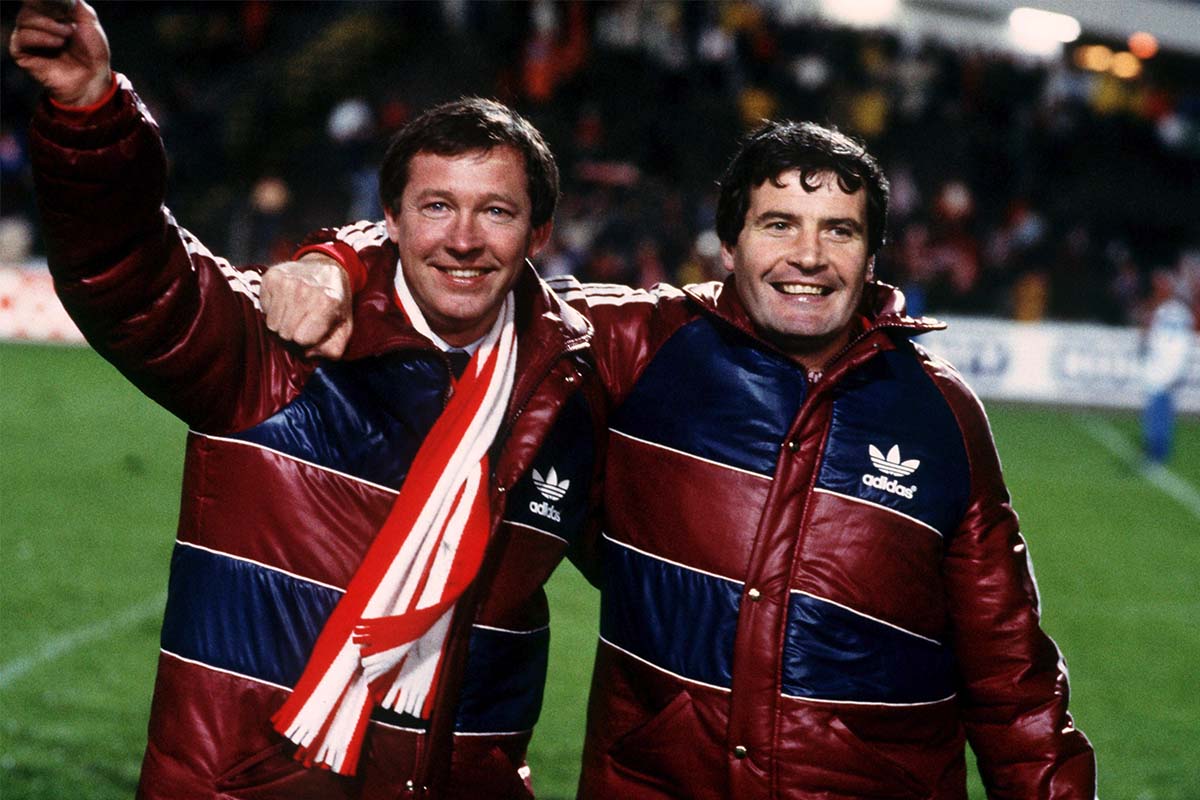 The boys from the North East of Scotland revelled in their role as perceived underdogs and never one to miss a trick manager Ferguson even presented legendary Madrid manager Alfredo Di Stefano with a bottle of whisky on the advice of his friend and mentor Jock Stein to give the impression that Aberdeen were simply delighted to just be part of the occasion.

The early stages saw Eric Black crash a volley against Augustin's crossbar but shortly afterwards Aberdeen got the first goal from a McLeish header, which was deflected and subsequently stuck on the waterlogged surface only to be turned in by Black from six yards – the lead had gone to the better side as Madrid had carved out little in the way of chances.

But the heavy rain, and the waterlogged the surface, was also to work against Aberdeen. A badly judged back-pass from McLeish led to goalkeeper Jim Leighton conceding a penalty which allowed Real back into the game. It was a mistake that would earn the big defender a dressing down that his manager would become famous for later in his career. “He just let rip,” he later claimed. “I tried to hide behind three or four players going into the dressing room.”

Aberdeen had the better of the second half, but despite the best efforts of Weir and McGhee, the score remained unchanged. Only once did Real threaten, when Salguero drove the ball past Leighton's far post from a free-kick. Extra-time saw the introduction of sub, John Hewitt and, with eight minutes to go, penalties were looming.

In one final push Weir skirted past two players down the left touchline and chipped the ball on to McGhee. His cross tempted Augustin off his line and he missed the ball by inches and there was Hewitt once again to head into an empty net. The hero of Munich in the quarter final was now the hero of Gothenburg and guaranteed his place in Pittodrie’s hall of fame for ever. 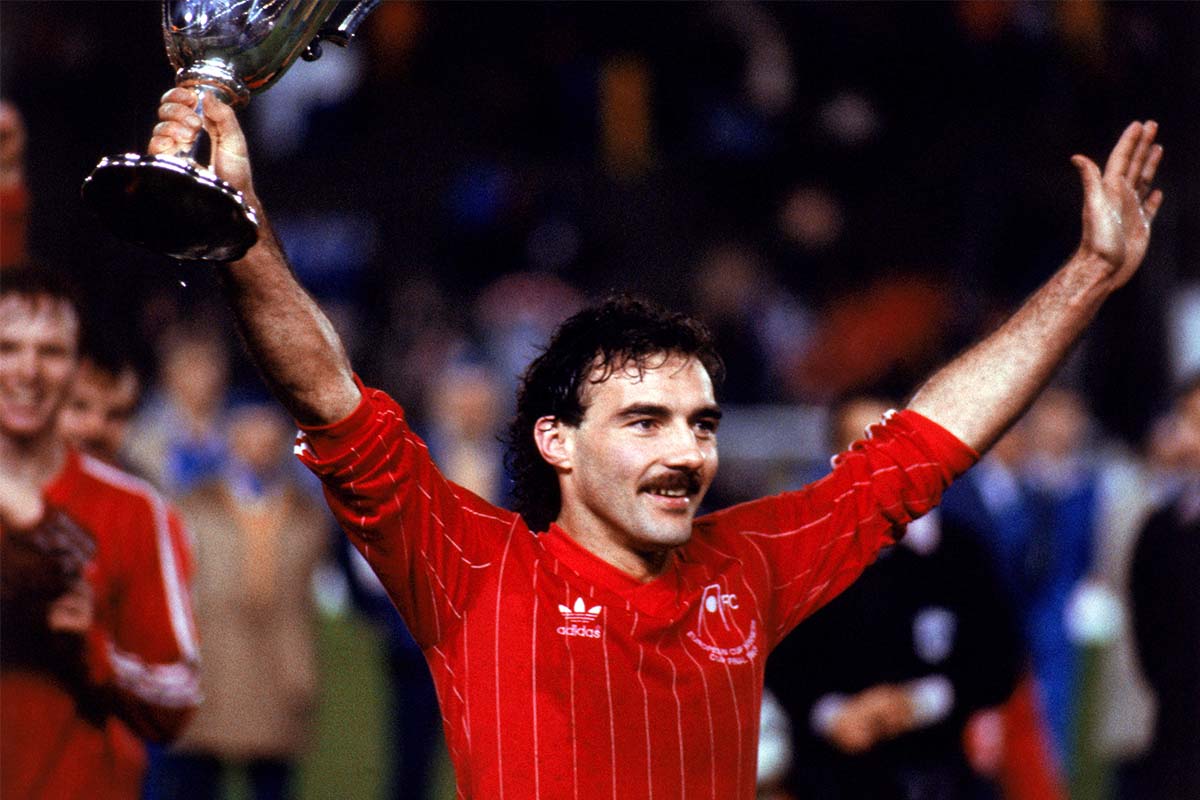 Aberdeen survived late pressure and against all odds Alex Ferguson and his indomitable Dons had won the European Cup Winners’ Cup with celebrations in Gothenburg and on the streets of Aberdeen living long in the memory. But for one group of fans there was an added surprise waiting for them on their return.

Such was the difficulty in getting to Stockholm on that Wednesday night fans had to use whatever means were available to them to get to Sweden with several hundred supporters crossing the North Sea by ferry, a journey which took two days. Keen to make sure these loyal Dons fans didn’t miss out, when they returned to Aberdeen 48 hours later, Ferguson and his skipper Mark McGhee were at the docks to greet them complete with the trophy.

“They were stunned as they came off,” said Ferguson at the time. “Some of them actually walked by me and I think they were maybe half-cut. They walked by and then they came back and said ‘is that the manager?'”

Ferguson claimed three Premier Division titles in his time at Aberdeen, four Scottish Cups, a League Cup and a European Super Cup before moving south but that rainy night on May 11th 1983 when his team defeated the mighty Real Madrid to win the European Cup Winner’s Cup will still be seen by many as his greatest achievement.