Winning the league title and FA Cup in the same season may not be looked-upon as such a big deal these days; but when Tottenham Hotspur did the “elusive” double in 1961 it was seen as something of an impossible dream, made possible by one man.

Liverpool did it in 1986, Chelsea too in 2010, Arsenal have done it twice and Manchester United achieved the feat three times during the 1990s. However, nobody had achieved this great footballing triumph in the 20th century back in 1960 and the last club to do so had been Aston Villa in 1897, with Preston North End’s “invincible” being the only other side who could brag about such an achievement.

So when Spurs won the double in 1961, they were seen as the first side in the “modern era” to achieve the unthinkable. But in order to find out just where this incredible journey began you need to go back to October 1958 and a managerial appointment that would change the North London club forever.

When coach Bill Nicholson was promoted to the role of Spurs manager, following the resignation of Jimmy Anderson, even though nobody knew it, it would turn out to be a line-in-the-sand moment for the club and something which would have a profound effect on everyone at White Hart Lane, even to today.

Nicholson was no stranger to Tottenham Hotspur. After a trial at the club as a schoolboy he was signed as a full professional at the age of 18 and played for the first team before he joined the Durham Light Infantry on the outbreak of the Second World War in 1939.

At the end of the war Nicholson returned to the Spurs first XI and played at the heart of their defence for two seasons, then moving to right half for a further six years. It's widely accepted that he played a hugely influential role in the legendary “push and run” Tottenham team which won the league championship in 1951.

Prior to Nicholson’s arrival Tottenham had suffered a poor start to the 1958/59 campaign, but his appointment had something of an immediate effect on the side, with Spurs putting 10 past Everton in his first game in charge in a 10-4 win in what is still their record league score to date. Almost overnight this advocate of quick passing football that was the trademark of his playing days was laying down his blueprint for the way he wanted his club to play the game and it seemed to be working.

However, despite such an instant turnaround in fortunes, rather than rejoicing in the fact his team had scored ten, Nicholson was more worried that they had shipped four; a genuine concern as it turned out, as Tottenham would eventually end up battling relegation that year mostly due to their cavalier style of play. 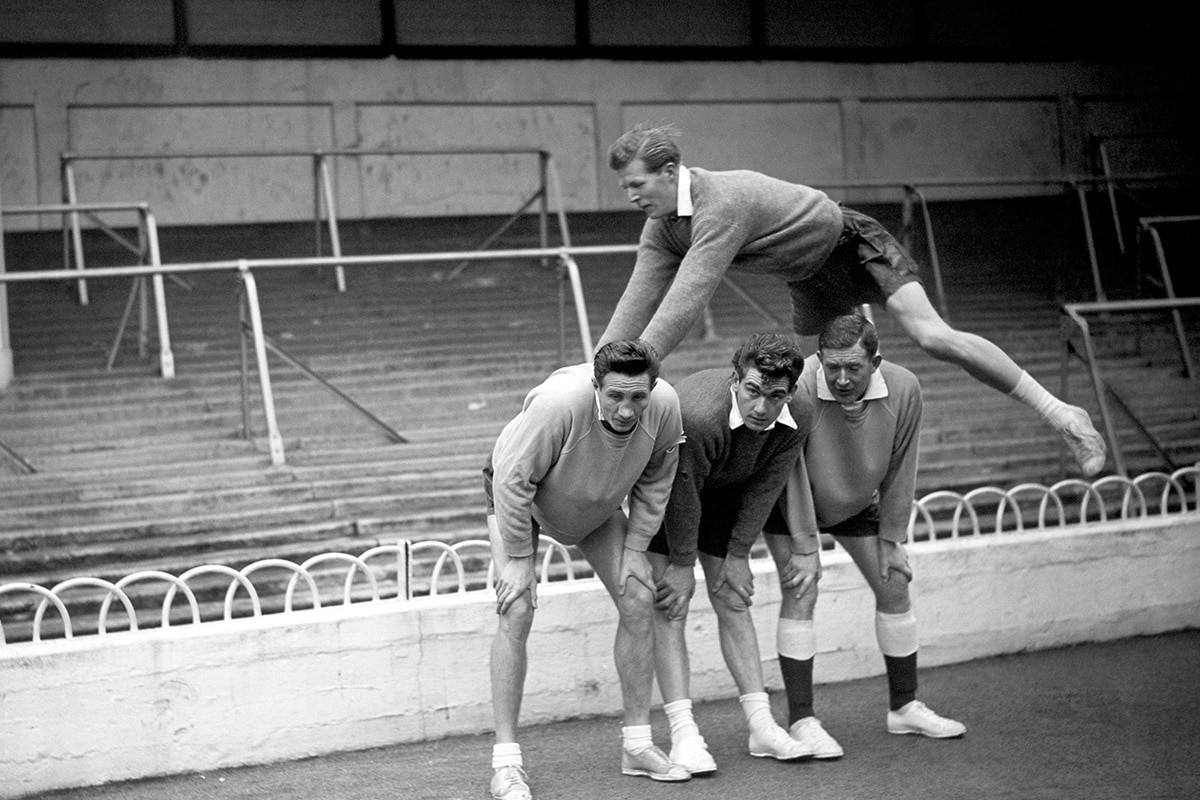 Defensive changes were now a priority for the new Spurs boss who had recalled the now legendary Danny Blanchflower, after he’d been dropped for previous games and Dave Mackay was signed from Hearts in order to strengthen the defence, which had been leaking goals like a sieve.

Spurs did manage to avoid relegation that season and Bill Nicholson’s thoughts soon turned to overhauling a side that had promised so much but delivered so little thus far. But this couldn’t be achieved overnight and during that summer Nicholson moved quickly to sign goalkeeper Bill Brown from Dundee and brought back Tony Marchi to the heart of the defence.

Spurs made a much better start to the 1959/60 season yet there was still something lacking in the team, meaning John White was signed from Falkirk and in December they acquired the services of little-known Chelsea reserve player Les Allen who would end-up becoming a club great.

The new additions seemed to do the trick and Spurs were definitely on something of an upward curve as they finished 3rd in the First Division in Bill Nicholson’s first full season in charge– a huge improvement on the previous campaign.

The 1960/61 season couldn’t have got off to a better start for Nicholson and his Spurs side. They won all of their first 11 fixtures with the twelfth game against Manchester City ending in a draw; but they soon got back to winning ways with another four consecutive victories before eventually losing their first game of the season 2-1 to Sheffield Wednesday in mid-November.

At the turn of the year they were already 11 points clear of second-placed Sheffield Wednesday and the championship seemed to be a foregone conclusion, with the only blip being an incredible 4-4 draw with Burnley who had been leading the game 4-0. 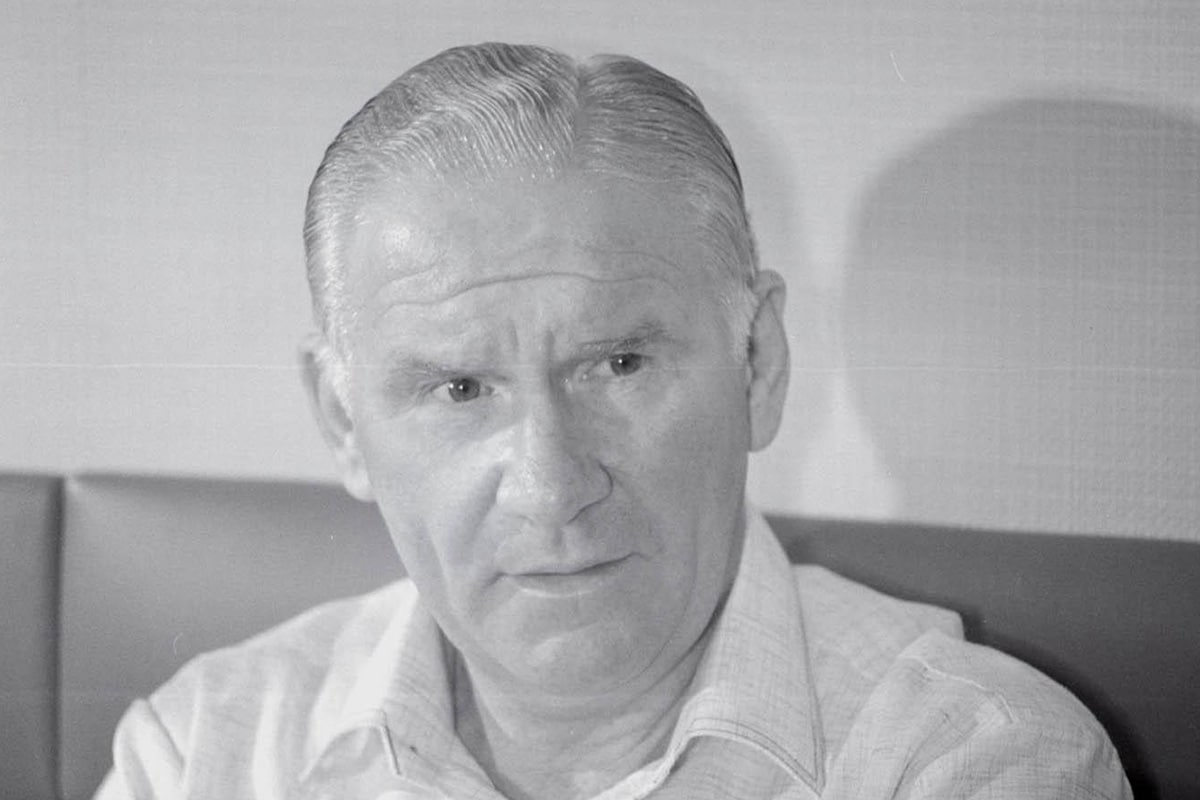 With the league seemingly sewn-up Spurs began their FA Cup campaign in January at home to Charlton Athletic where two goals from Allen and one from Dyson saw them to a narrow 3-2 victory. Another home draw in the fourth round was somewhat easier as they cruised past Crewe Alexandra 5-1 before a 2-0 win away at Aston Villa set-up a quarter-final away to second division Sunderland, where they were lucky to earn a 1-1 draw, before demolishing the lower division side 5-0 in the replay at White Hart Lane.

But an all-out assault on two fronts was beginning to take its toll and Spurs’ league form had slumped dramatically. By Easter their lead at the top had been cut to three points, prompting some rather unfair criticism of manager Nicholson; but when Spurs took on relegation strugglers Preston North End on 1st April they quickly calmed the nerves of the supporters and silenced the critics with emphatic victory that once again stretched their lead at the top over nearest challengers Sheffield Wednesday.

So when Wednesday arrived at White Hart Lane on April 17th some way off Spurs in the league, anything but a win for The Owls would all but seal the title for Nicholson’s Tottenham side.

It was the visitors who took the lead through Don Megson that day as they really looked to put the cat amongst the pigeons when it came to the title race; but their celebrations were short-lived when Bobby Smith grabbed an equaliser almost immediately and Les Allen followed it up with what proved to be the winner.

Although they had not secured the title mathematically that day the scenes at the final whistle were to suggest both players and supporters felt they had done enough as fans invaded the pitch and the Spurs players appeared on the balcony of the main stand.

As it turned out Spurs were to lose two of their remaining three games at the end of the 1960/61 season, which would ultimately cost them a record point total and mean they could only equal the 66 point mark set by rival North London side Arsenal. However, they had won the League Champions by a margin of eight points from Sheffield Wednesday and the 31 wins they achieved was a record for a 22 team league.

With the title won Spurs could now look to secure their place in history by becoming the first team that century to win the league and FA Cup double, something which hadn’t been done for some 64 years.

A win in the semi-final against Burnley at Villa Park saw a brace of goals from Bobby Smith and another from Cliff Jones secure a comfortable 3-0 in front of nearly 70,000 people and put them through to their first final since 1921 where they would face Leicester City and a date with destiny. 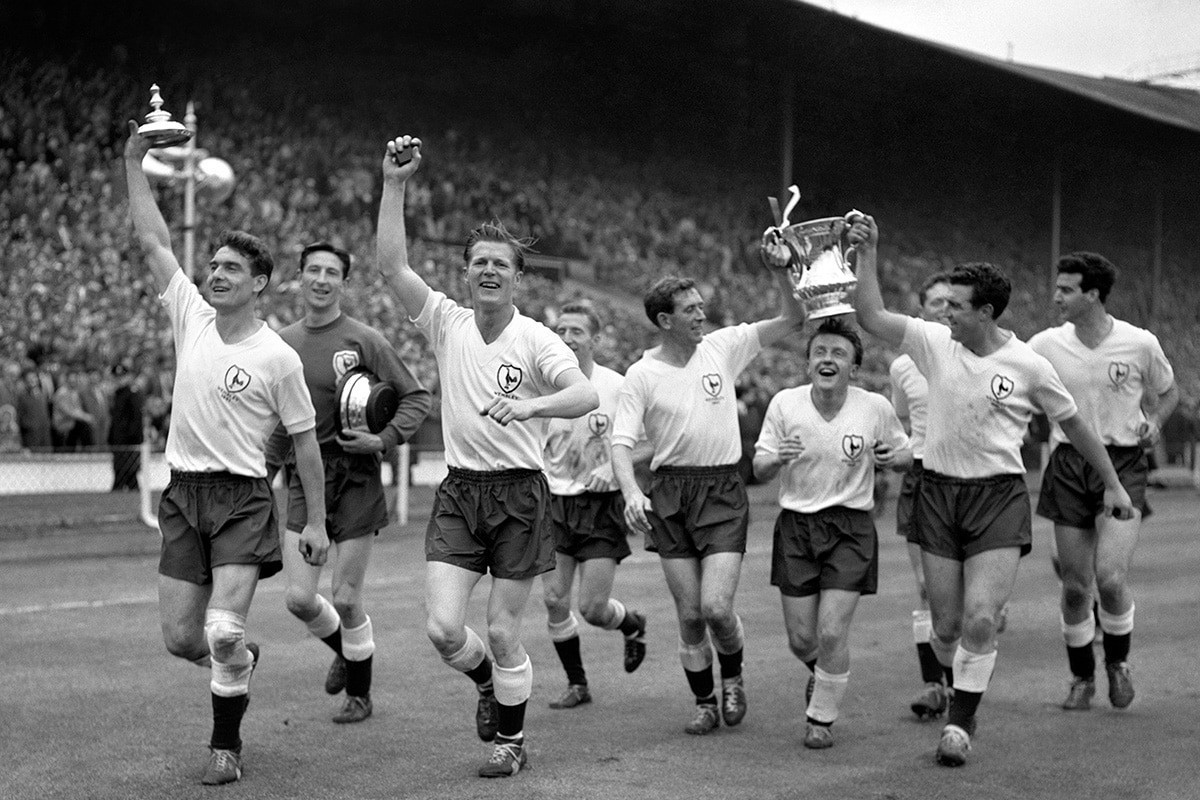 Having only fielded 17 players throughout the entire season, Spurs’ players were understandably jaded in a cup final that took some time to get going and despite much Tottenham pressure and a disallowed goal from Cliff Jones the game was goalless at the break.

A similarly cagey second half finally came to life when, in the 66th minute, Terry Dyson threaded the ball through to Bobby Smith who turned his man and crashed an unstoppable shot past Leicester's legendary goalkeeper Gordon Banks. Unwilling to try and see-out the match Spurs continued to press and in the 75th minute this time Smith crossed the ball for Dyson, whose header secured the historic victory.

Those Tottenham players who pulled on the white jersey that season had assured themselves legendary status at the club -a side which even long-standing Tottenham fans now can reel off from one-to-eleven – a tribute reserved only for the greatest sides to have played the game.

And thanks to a style of football that was attractive yet still effective, not to mention an irrepressible manager who knew just how to get the best out of his players, Spurs and Bill Nicholson had made Tottenham’s dreams a reality.

That double-winning side had set a bench mark that all sides thereafter who considered themselves to be serious contenders would have to strive for. A philosophy that was summed up perfectly by Nicholson himself when he said: “It is better to fail aiming high than to succeed aiming low and we have set our sights very high, so high in fact that even failure will have in it an echo of glory.”