On the face of it, Glenn Murray is a throwback.

A balding 34-year-old target man who worked his way up the leagues, from Cumbrian non-league side Workington Reds to dinking the ball past David de Gea in the Premier League for Brighton & Hove Albion.

The only way in which he differs from the archetypal English centre-forward is that he doesn’t give off the impression of being a studs-up, all-elbows brute.

He’s certainly aware that he might be in danger of being traded in for a younger model.

“I have to thank him [manager Chris Hughton] for giving me the opportunity to play at this level,” he said following the game against Manchester United, which Brighton won 3-2.

“You see with some of the promoted teams this year that they have got rid of some players and have brought some big names in. Thankfully our manager did not do that.

But when a striker scores 0.49 goals per 90 minutes, as Murray did last season (16th-best in the league), it would be hard to justify dropping them. The striker has earned his place in the team, and not just as a goalscorer.

Murray has successfully received the joint-most high long balls in the league so far this season (18, along with Steve Mounie of Huddersfield Town). It’s no surprise, then, that his persona radar – which calculates how a person or team plays stylistically – looks like this:

This is exactly what Brighton need. As a recently promoted side – with the general talent level of one to match – much of their time and players will be needed for defending. Defending deeply is all well and good, but when a team clears the ball they need it to be more than just a fleeting relief.

A look at the passes that Murray received against Manchester United shows just how effective and consistent release valve (and target from goal kicks and throw-ins) he was. 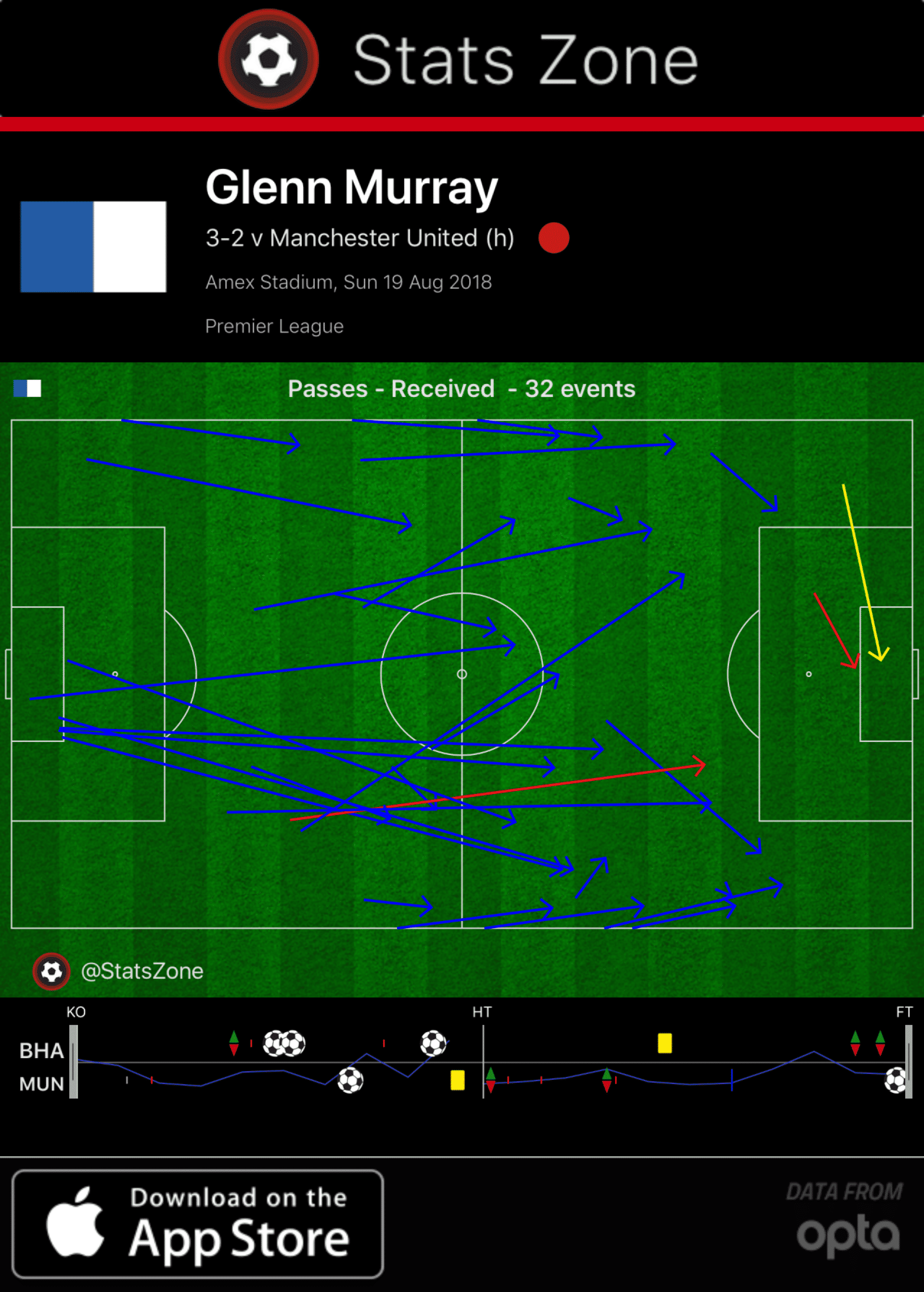 Murray wasn’t just a good release valve though; he was involved in a surprising amount of Brighton’s spells in possession.

Usually, according to Football Whispers’ data, players are involved in around seven to ten percent of their team’s possession sequences in a match. The most involved players will be around ten to 12 percent, but Murray featured in 14.88 percent of the Seagulls’ sequences of play against United.

The week before, against Watford, he was involved in 9.32 percent, a far smaller share but still one of the larger ones on the team. He might not always be able to turn these receptions into dangerous attacks, but for a team in Brighton’s position just giving the defence some respite and an opportunity to organise and push up the field a bit is a good thing.

These stats on how involved a player is are interesting and shows how flawed the differentiation between ‘modern’ and ‘old-school’ players is.

One interpretation of the ‘modern striker’ is an attacker who has to be involved in all-round play. They’re more than just a poacher, they interact with the rest of the team. Murray clearly interacts with his team-mates an awful lot, albeit perhaps in a slightly one-sided way.

Football moves in ebbs and flows. The vogue for possession-based football is coming to an end, if it hasn’t done so already, because a new trend came along that found an edge.

There may not be a place for a Glenn Murray in every team, but there will always be a place in football for a striker who can receive long balls, act as a pressure release valve, and score goals.