West Ham United spent much of last summer very publicly – and equally unsuccessfully – trying to recruit a big-name striker to spearhead their push up the Premier League table.

In the event, after Chelsea beat them to the signing of Michy Batshuayi from Marseille for £33million. The Hammers ended up with Juventus' Simone Zaza on a season-long loan with the obligation to sign him permanently. The Italian international failed to score in 11 games and his deal was cut short in January to enable him to join Valencia on loan instead.

This summer West Ham appear intent on atoning for a poor transfer window 12 months ago and Olivier Giroud are a big step in the right direction.

The French international, 30, has never fully won over Arsenal fans or Premier League observers. For as potent as he is in the penalty area there is something ungainly about the former Montpellier forward and that, bizarrely, overshadows his enviable goalscoring record.

Last season he found himself, understandably, behind Bayern Munich transfer target Alexis Sánchez at the Emirates Stadium. Afforded just 11 Premier League starts, Giroud returned 12 league goals at an average of one every 99.8 minutes – a better minutes-to-goal ratio than Sánchez (134.3) who took the headlines with 24 strikes in the league. 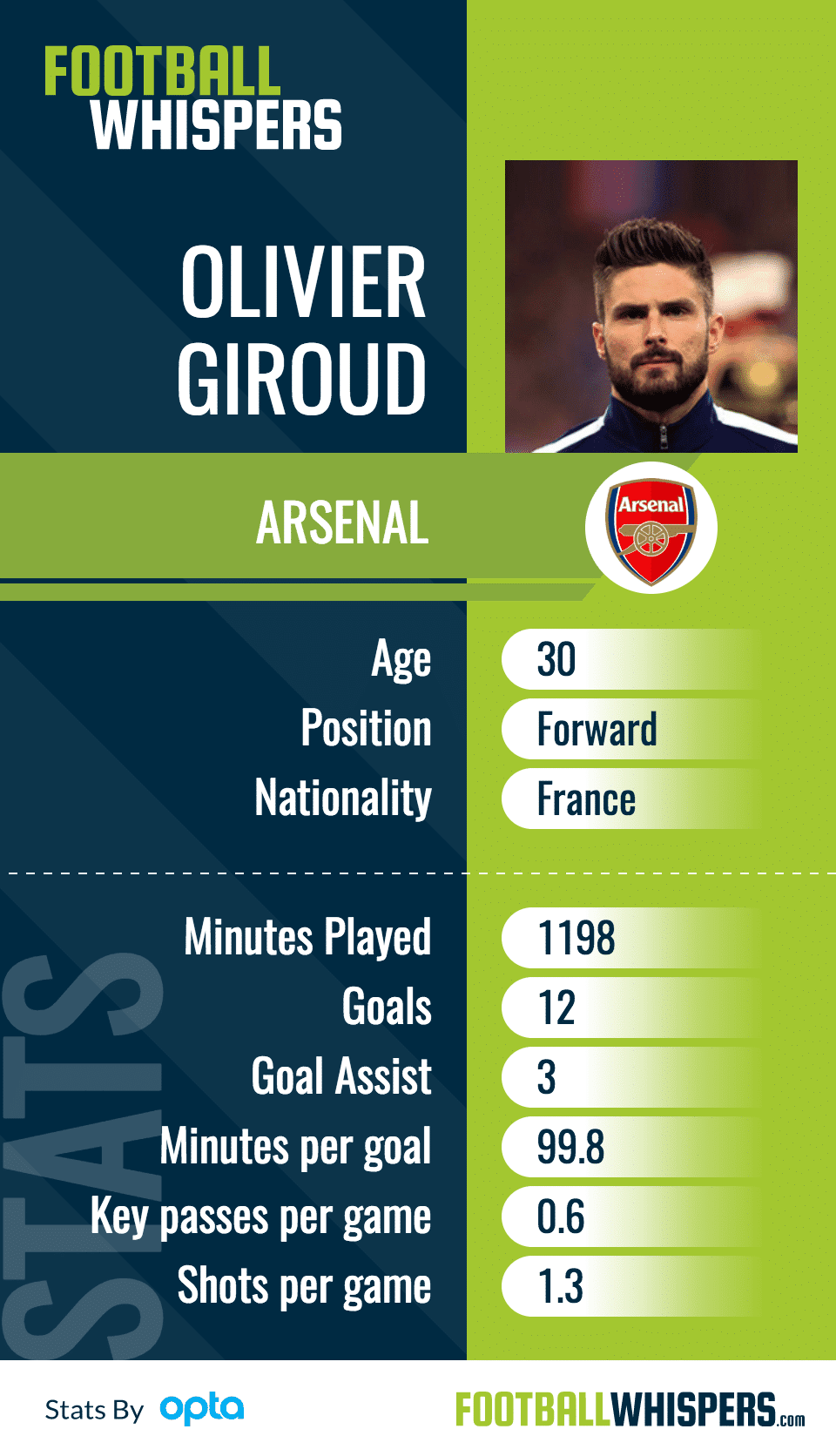 Giroud has tended to be something of a lightening rod for Arsenal fans' frustrations in recent times. That despite a record which has seen him post a better than one-in-two ratio in all but his first season in England where, after a sluggish start, he hit 11 in 24 Premier League starts.

But there is much more to the forward. He is an incredibly clever player and while he does not boast the hulking physique of the Hammers' own Andy Carroll, he is an equally adept line leader.

He can bring hold up the play, bring others into play and link the play impressively – traits which would dovetail nicely with the Hammers' attacking midfielders, most notably Manuel Lanzini.

It is easy to look at his 6ft 4in frame and pigeon hole Giroud as a target man. But he is much more to him than the battering ram he has been stereotyped as in the past.

For example, in Arsenal's FA Cup final win over Chelsea last month, it was Giroud who set up Aaron Ramsey's winner for the Gunners. The Frenchman gets the march on Blues defender Gary Cahill from Sánchez's perfectly-weighted ball in behind. 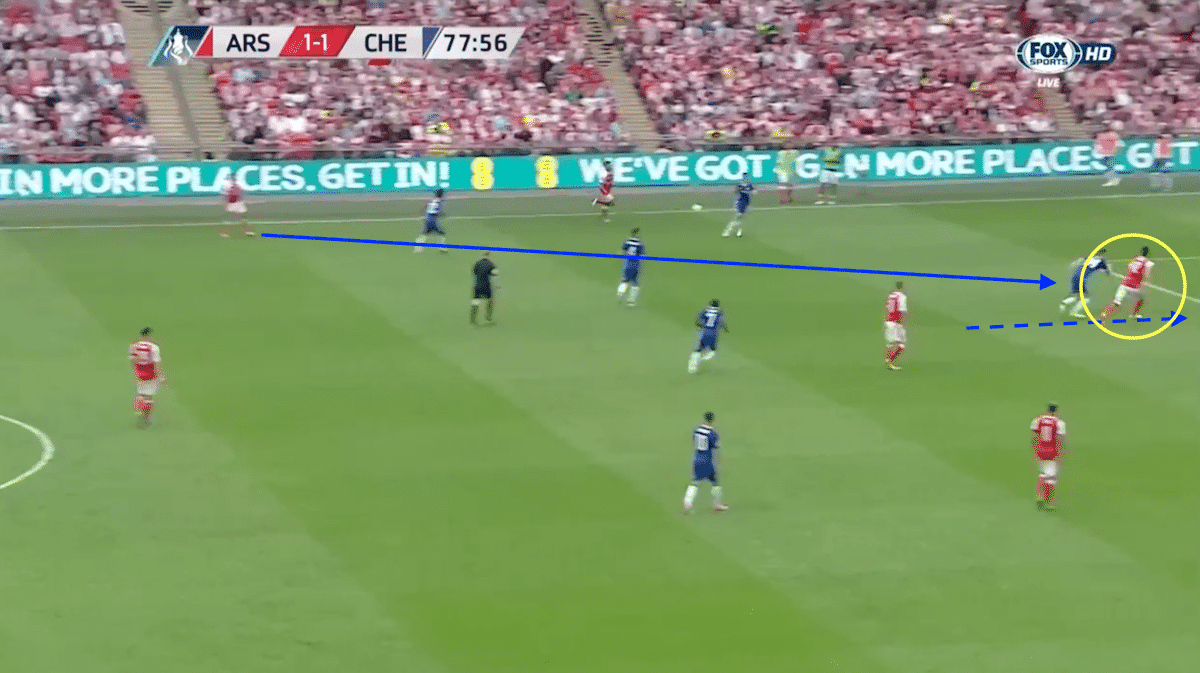 He then cuts back onto his left foot inside the box and sits up an inviting cross for Ramsey to arrive – ahead of the usually irrepressible N'Golo Kanté – and head the Gunners' winner 12 minutes from full time. 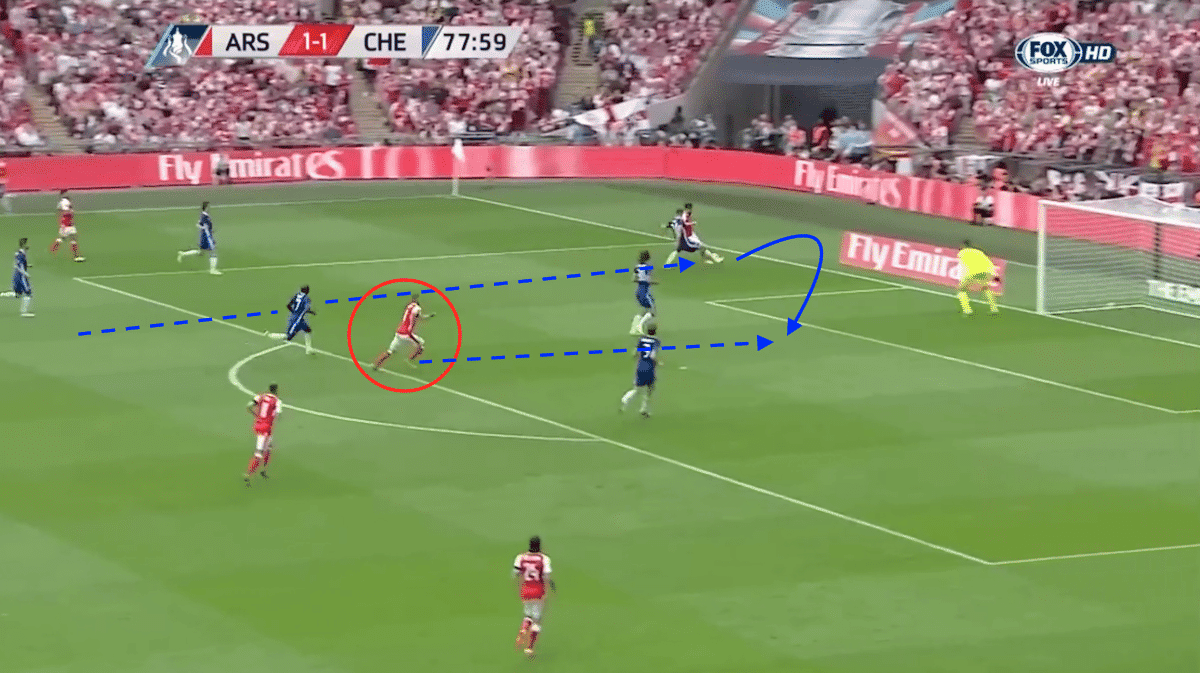 Giroud demonstrates his more considered, creative, side again as the game draws to a close. The balls loops up in the air and he used his physique well to bring it down to earth. Instead of – as might be tempting given he is left footed – turning and trying a shot he lays the ball off with a back-heel for the arriving Ramsey (circled in red) to try a shot from a better position. 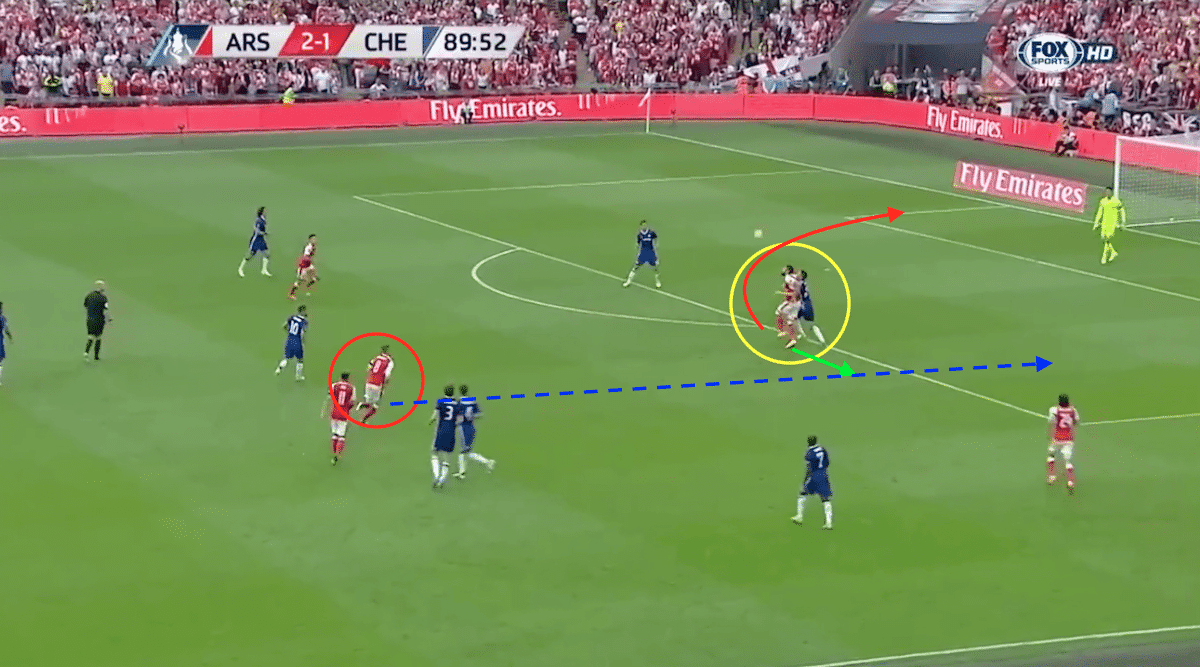 Although he was roundly criticised for celebrating his equaliser as Arsenal came from 3-0 down to draw at Bournemouth in January, Giroud made the first two goals with the deftest of touches, underlining quite how aware he can be of those around him.

For the first he helped on Alex Oxlade-Chamberlain's hopeful crosses from the right, stooping to flick the ball to the back post for Sánchez to nod home. But the second was masterful.

Granit Xhaka pokes Sánchez's pass infield into the box where Giroud, with absolute nonchalance, cushions the ball up with a deft touch so it falls perfectly for Lucas Pérez (circled in red), lurking level with the six-yard box but at an acute angle, to leather a sumptuous volley home. 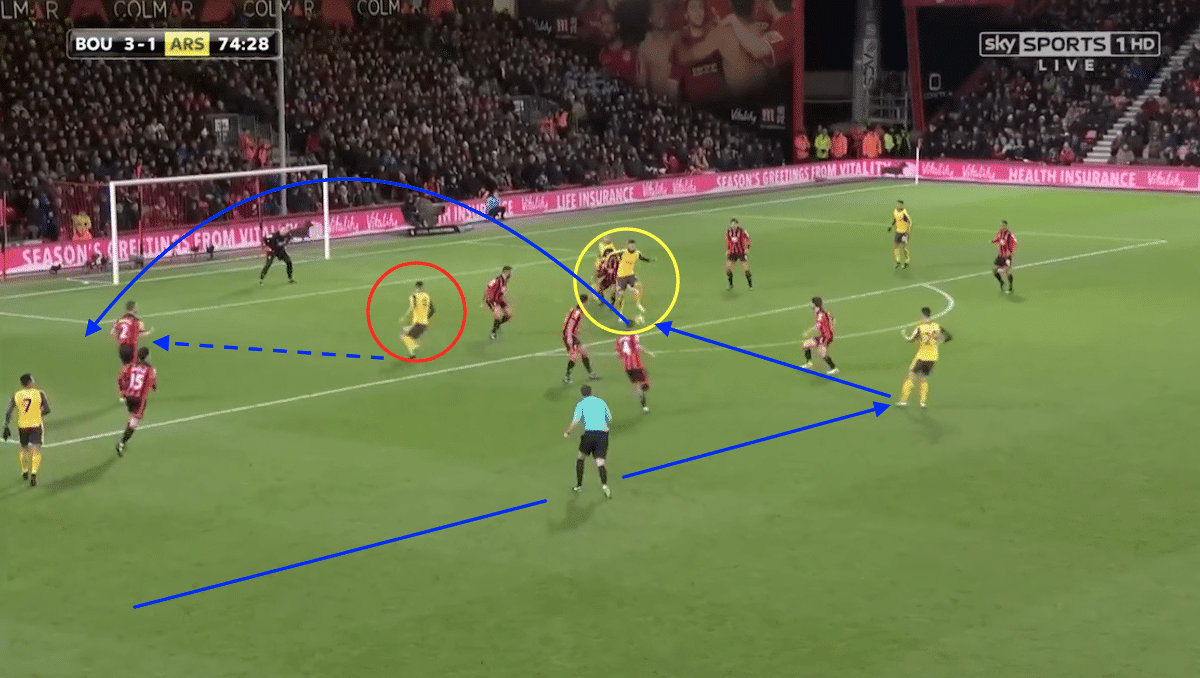 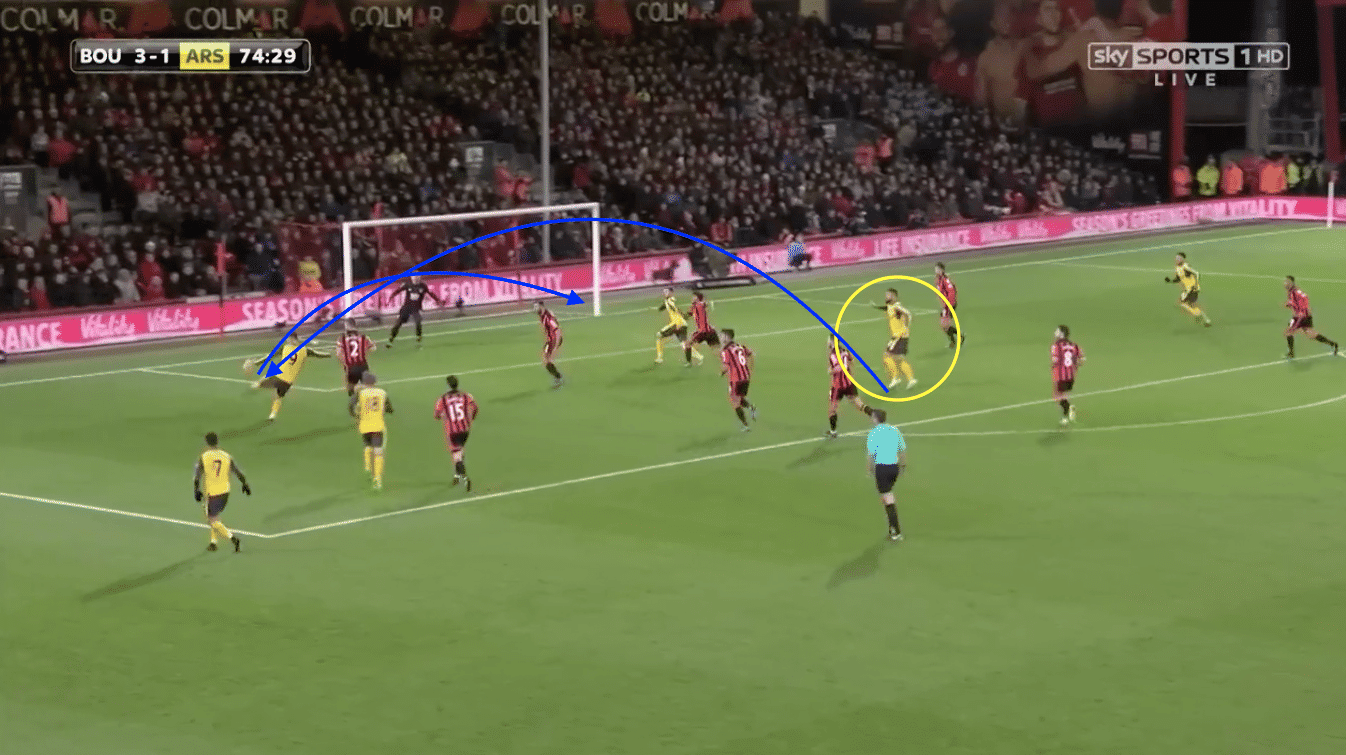 As well as being a provider of fine goals, Giroud scores them too. His so-called scorpion kick, scored with the heel of his boot flung backwards, against Crystal Palace for as fortuitous as it was outrageous.

But this more recent effort, for France in a World Cup qualifying defeat against Sweden, married up his audacity and technical excellence exquisitely.

It was the sort of strike football fans trawl YouTube to find whenever they are linked with a new forward in the hope he will be the one to fix all their woes. In the case of the Giroud that might well be the case.

He adds the guile and technical qualities which Carroll has but not to such a refined level. Giroud would add another dimension to the Hammers' play while getting more out of those around.

But West Ham will have to convince the forward they are the big-name club to match his reputation. That could be the stumbling block after a season of regression at the London Stadium.