Girona take on Celta Vigo at the Estadi Municipal de Montilivi on Friday, August 26th. Celta go in search of their first victory of the new campaign when they visit Girona. Read our free predictions and find the latest odds for the fixture below in our detailed match preview.

Girona are targeting their second win on the bounce when they host struggling Celta Vigo on Friday evening. Read our top predictions for this week’s fixture below.

Girona harnessed the energy from the passionate home crowd last weekend when they blitzed Getafe 3-1 in the club's’ first match at the Estadi Municipal de Montilivi since their promotion and the hosts could make home advantage count again when Celta Vigo come to down on Friday. The visitors have claimed just one point from their first two assignments of the season and with their form still foggy, they could come unstuck again. For added insurance, back Girona in the generously-priced draw no bet market.

Both Girona and Celta Vigo have been troubled by defensive issues in the opening exchanges of the new La Liga season and bettors shouldn’t expect either side to keep a clean sheet in Friday’s fixture. Girona were unable to shutout their opponents in either of their first two matches of 2022/23, while Celta shipped an alarmingly high six times in their first 180 minutes of action. With those records digested, it makes sense to back both backlines to concede again this week.

Top Betting Odds and Stats for Girona vs Celta Vigo

Check out our list of the top stats for Friday’s game below alongside a tool to help you choose the most lucrative odds.

Read all of the latest injury updates and team news for Friday’s La Liga clash between Girona and Celta Vigo below.

Borja Garcia, Ibrahima Kebe and Bernardo Espinosa are all out of action until next month for Girona. Head Coach Michel was understandably thrilled about his team's performance against Getafe last time out and he could keep faith with the same XI that impressed him.

Celta Vigo have no injury or suspension issues to contend with ahead of Friday's game. Los Celestes were thumped 4-1 at home by Real Madrid in their last runout, though that result was always on the cards and the panic button won't be pressed just yet. Expect a similar team to take the field against Girona. 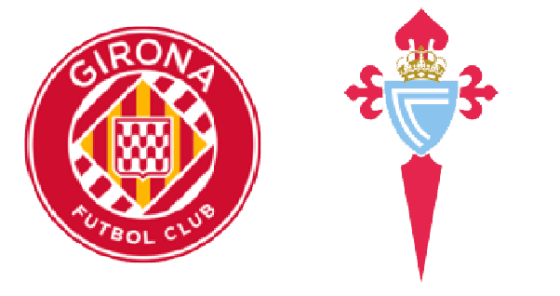 The bookmakers have priced Celta Vigo as slight favourites to win this week.

Which club is favourite to win La Liga this season?