After Real Madrid's enthralling Champions League final victory over Atletico Madrid, Zinedine Zidane became just the seventh member of an extremely exclusive club: men who have won Europe's premier club competition as both a player and a manager.

To focus specifically on the last man on that list, Trapattoni, who's widely considered the greatest manager in Serie A history, is to look back upon a true managerial great.

Born in Cusano Milanino in 1939, the Milanese local would begin his overwhelmingly successful playing career with AC Milan when he joined their youth setup as a 14-year-old in 1953. Trapattoni went onto make his first-team debut in 1959 and quickly began to make a name for himself as an uncompromising central defender, who could also operate as a defensive midfielder.

Working under Gipo Viani and then the legendary Nereo Rocco, two managers who were widely recognised as the pioneers of Catenaccio, Trapattoni would be moulded into a tough, unrelenting defender. Winning by any means necessary, not in style, was very much the ethos he adhered to, and it must be said that he was a perfect embodiment of his manager's philosophies.

Whatever defensive task was given to him, he carried out with devastating effect and unwavering commitment, in a career where he successfully nullified the likes of Johan Cruyff, Eusebio and Pele.

The fact he won two Serie A titles, one Coppa Italia, two European Cups, a UEFA Cup Winners' Cup and an Intercontinental Cup served as a testament to his quality and hunger to win, while also demonstrating how fruitful the Catenaccio tactic can be with players who are willing to enforce it.

Running out 17 times for the national team further accentuated what a brilliant career he enjoyed.

Following his retirement, Trapattoni's desire to get into coaching was satisfied when he took over the Rossoneri's youth team in 1972. With two years under his belt, he then replaced Cesare Maldini as Milan's caretaker coach and would later be appointed permanent manager in 1975.

While many thought he might go onto have a long and illustrious coaching career at the club he enjoyed an 18 year uninterrupted spell with, this wasn't to be the case. Juventus, noticing his talent from behind the touchline, swooped rapidly. Giampiero Boniperti, the Old Lady's president at the time, immediately saw promise in Trappatoni and swiftly brokered a deal to get his man. And the rest, as they say, is history, for Il Trap's exceptional work would see him go down in history as one of the greatest managers of all time.

Known for his unmatched tactical knowledge and masterful man management, Trappatoni's decade in charge of the Turin giants, from 1976 to 1986, was outrageously prosperous. Over the course of his 10 years at the helm, he won a whopping six Scudetti, two Coppa Italias, an Intercontinental Cup, the European Cup, a UEFA Cup, one UEFA Cup Winners' Cup and a European Super Cup (all four European trophies available at the time). Indeed his achievements were nothing short of spectacular.

Having some absolutely fantastic players at his disposal during this period like Zbigniew Boniek, Michel Platini, Paolo Rossi, Gaetano Scirea and Marco Tardelli was obviously a massive factor in his success, but he nonetheless deserves all the plaudits for the way he organised, motivated and galvanised his troops.

Tactically, he predominantly worked within the confines of the methods he learned as a player at Milan, and although his team wasn't always the prettiest to watch, sticking to such proven formulas worked wonders for him. His results and sustained success emphatically vindictated his philosophy.

“Our football is prose, not poetry,” he succinctly mused.

So good was Trappatoni over his tenure with Juventus that aside from bringing the club their first ever European Cup, he incredibly won a trophy in nine of his 10 seasons in Turin.

1987 saw the astute tactician join Inter Milan and Trapattoni proved he was up to the task there too, leading the Nerazurri to three titles in his five years in the hotseat. On top of winning the Italian Super Cup and the UEFA Cup, Trap impressively secured his seventh league title to once again show his wizardry and suitably depict his undeniable team building qualities.

Although this would be his last Serie A title winning job, the tough task master opted to return to Juventus for another three year stint spanning from 1991 to 1994, where he would propel the club to the 1993 UEFA Cup.

Trapattoni then bravely embarked on a move abroad, taking over Bavarian giants, Bayern Munich, and, over two separate spells, displaying his adaptability to transfer his skills, vast experience and knowledge to claim a further three titles in Germany: The German Cup, The German Super Cup and the Bundesliga.

After his first stint with Bayern, the wise Italian answered Cagliari's call, but unfortunately things didn't go to plan for him there, leading to him suffering the indignity of being sacked for the first time.

In 1998, Fiorentina were next to acquire his services and Trap didn't let them down either, in a season where he mounted a serious title charge. Ultimately, however, his La Viola outfit, which featured the brilliant Gabriel Batistuta and Rui Costa, finished third, but Champions League qualification was a positive consolation.

Famous results in Europe's showpiece tournament ensued, as he orchestred inspirational victories over Arsenal and Manchester United. Meanwhile, in the league, things weren't so bright, with Fiorentina slipping to seventh that campaign. Trapattoni subsequently departed at the end of the 1999/2000 season, where a huge challenge awaited him.

Courtesy of Dino Zoff's resignation, Trapattoni was handed the prestigious post of managing Italy. He started positively, comfortably achieving qualification for the 2002 World Cup by getting through to the tournament undefeated. The Azzurri's unfortunate exit at the cup, where they were harshly dealt with by referee, Byron Moreno, in their round of 16 clash against co-hosts South Korea, was a massive source of disappointment.

This match gained notoriety as the Ecuadorian ref made a slew of baffling decisions against the Italians, culminating in Francesco Totti being wrongly sent off for diving. Trapattoni subsequently levelled accusations at FIFA for fixing the tournament, which the Italian public agreed with.

Unfortunately his next major competition with Italy, Euro 2004, didn't go to plan either. Despite Italy not losing any of their three group games, obtaining one win and two draws, they cruelly were forced to exit the championships due to their inferior goal difference.

In a wicked twist of fate, Marcello Lippi replaced Trap shortly after and would go onto win the 2006 World Cup with the Azzurri.

Trapattoni proceeded to join Benfica in 2004 and enjoyed instant success, delivering the Eagles their first league title in 11 years. Upon citing family reasons, he left after just a year in the job and moved to Stuttgart. His time in Germany was a disaster, with Jon Dahl Tomasson and Jesper Gronkjaer complaining that Trap's negative football and unwillingness to attack was damaging the club.

As time went by and with the situation not improving, Stuttgart opted to sack him after just 20 games in charge. Barely three months later, though, Trapattoni had already secured his next job, signing for Red Bull Salzburg. His former pupil at Inter in Lothar Matthaus joined him for the ride as his assistant manager, and the pair formed a formidable duo. Trap's ability to mould and shape his sides into winners shone through brightly yet again, as Salzburg clinched the 2006/2007 Austrian Bundesliga by a staggering 19 points. 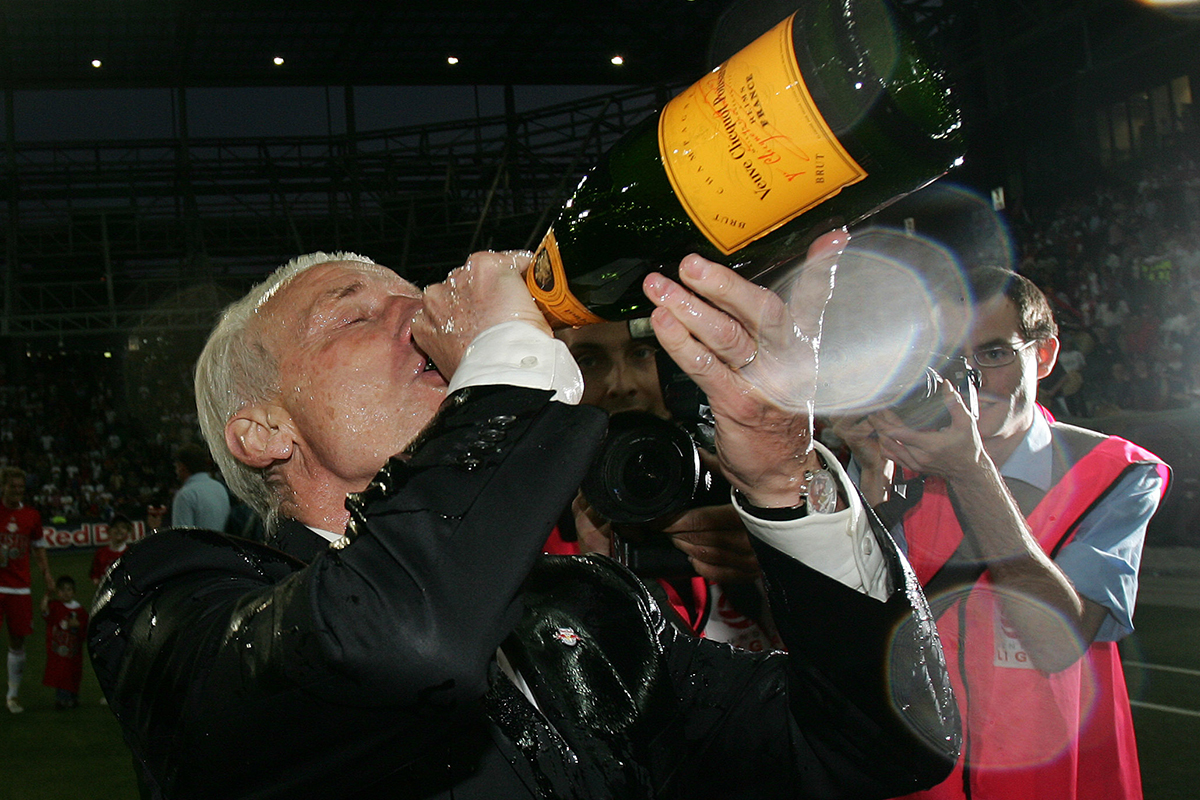 Taking charge of Ireland's national team in the wake of his two years in Austria served as his last major appointment, and he did a solid job during his five years at the helm.

Getting through the group stage of World Cup 2010 qualifying undefeated duly evidenced his effectiveness, but it still meant the Irish had to face France in a play-off to guarantee their spot in South Africa. That infamous Thierry Henry handball was devastatingly all that separated Ireland from a spot in the finals, as they succumbed 2-1 on aggregate to Raymond Domenech's side.

Trapattoni made no mistake in obtaining qualification for the European Championships in 2012, however, but with Italy and Spain in their group, the two eventual finalists, they sadly bowed out at the group stage. Trapattoni's position managing Ireland then came to an end in 2013, via mutual consent, when Austria inflicted a defeat that saw their chances of making the 2014 World Cup dashed.

Even though Trapattoni became known for using phrases like “The players are free to do what I say,” he did still, however, appreciate exquisitely talented individuals. None more so than a certain Francesco Totti, who he absolutely adored as a player.  “Every player has some genius, but there's only one Van Gogh, and there is nobody like Totti,” he opined.

“Totti can transform a side. There are very few players who have that capability.”

“He reminds me of Eusébio, as quick mentally as he is physically. If I was still playing football today, then I would have real problems marking Totti, a bit like I struggled to control Pelé in the past. He has those same characteristics.”

These days, the now 77-year-old can regularly be heard voicing his opinion on the beautiful game. Upon listening to his comments, it's obvious he still loves managers whose methods are very much in a similar mould to his, such as Antonio Conte and Diego Simeone. “Sure, I see myself in Antonio (Conte),” he told La Gazzetta Dello Sport. “Especially as he is careful in the preparation for games.”

He then poignantly noted his dislike of the tiki taka philosophy, stating: “I'm not going to name names, but there are some teams which play the ball around for half an hour without a single shot on goal… that sends me to sleep,” Trapattoni told AS.

“I prefer Simeone's way – a thousand times. He's someone who goes right down to the grain and always promises a thrilling spectacle with his intensity. Saying that his side plays badly is a massive lie.”

All things considered, Trapattoni had a superlative managerial career that saw him miraculously win league titles in four different countries. Indeed his achievements have been magnificent across the continent, but his accolades back in his native Italy are what he's most fondly remembered for. Being inducted into the Italian football hall of fame was the perfect honour to bestow upon him for all his outstanding work.

Although he's had his critics over the years, Il Trap can rest assured that he's earned his place as one of the greatest managers of all time, not just in Italy, but also the world.