Fiorentina, as a club, are in a weird place right now.

They haven’t won a match since the middle of February and are currently on a six-match losing streak. Vincenzo Montella, who only returned to the club in April as manager, is already under pressure with reports suggesting he could be replaced when the Serie A season comes to an end.

And yet, despite all of their troubles, La Viola have some of the most exciting talents in world football as part of their squad.

Alban Lafont, still only 20, has been mentioned as a potential successor to David de Gea at Manchester United. Federico Chiesa has been linked with Juventus, Chelsea and Liverpool in recent times, too.

While Giovanni Simeone, son of Atlético Madrid manager Diego, has an expected goals return of 40 since the start of the 2016/17 season, a total only Kylian Mbappé (44) and Timo Werner (41) can better of players aged 24 or under.

There’s clear talent in the ranks. All eyes tend to go the way of Lafont and Chiesa but it is Simeone who is perhaps the most intriguing one of the trio.

With many of Europe's elite reportedly in the market for a striker this summer, the 23-year-old could be a shrewd buy. His stock isn't as high as it was last season. Neither is his goals tally. It's dropped from 14 to six and this will no doubt be reflected in his price tag.

If reports are to be believed, Luka Jović is heading to Real Madrid for around £50million. Liverpool and Manchester City were believed to be interested in the prolific Serbian attacker.

Simeone isn't in Jović's stratosphere based on the stats from the 2018/19 campaign, with the Eintracht Frankfurt man finishing with 11 more league goals, but when looking at their expected numbers they're much closer. 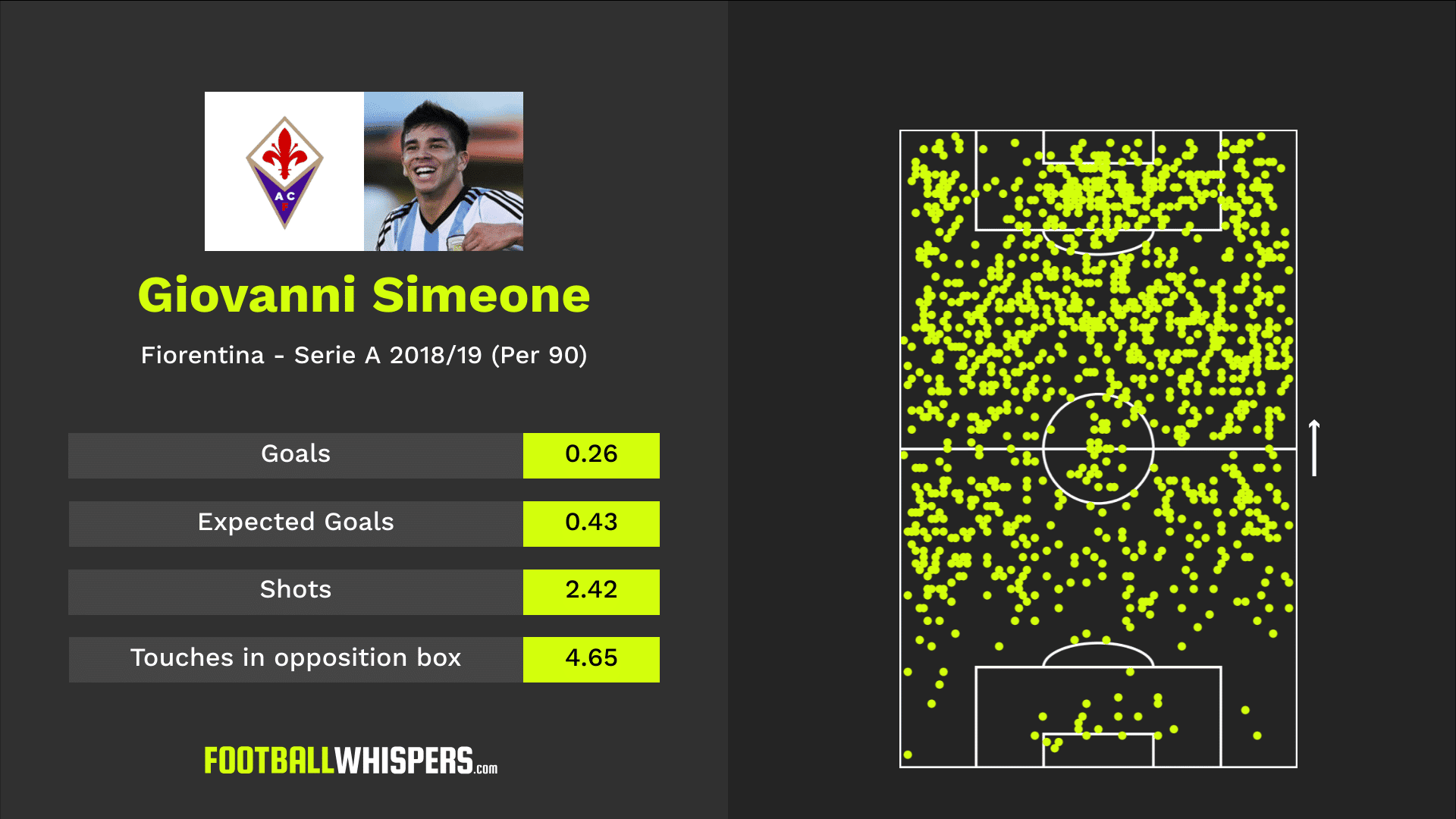 Whereas Jović outperformed his expected goals (xG) per 90 average of 0.52, Simeone struggled to match his 0.43. However, what should be encouraging for any potential suitor is that the Fiorentina forward continues to regularly get into high-quality goalscoring opportunities.

During the 2016/17 campaign, his xG for Genoa was 11.78 and he finished the season with 12 goals. His debut season in Florence saw him net 14 goals with an xG of 15.5. A slight underperformance but nothing major.

This season he has six goals to his name from an xG total of 11.61.

The stats suggest the 2018/19 season is an anomaly in terms of output. In his previous two campaigns in Italy, his expected goals numbers have been fairly accurate. This year it's effectively halved.

On one hand, his finishing hasn't been up to scratch. On the other, Simeone has made it into double digits for expected goals for three straight seasons and this year he managed it playing in a team going through a transition, and managerial changes. 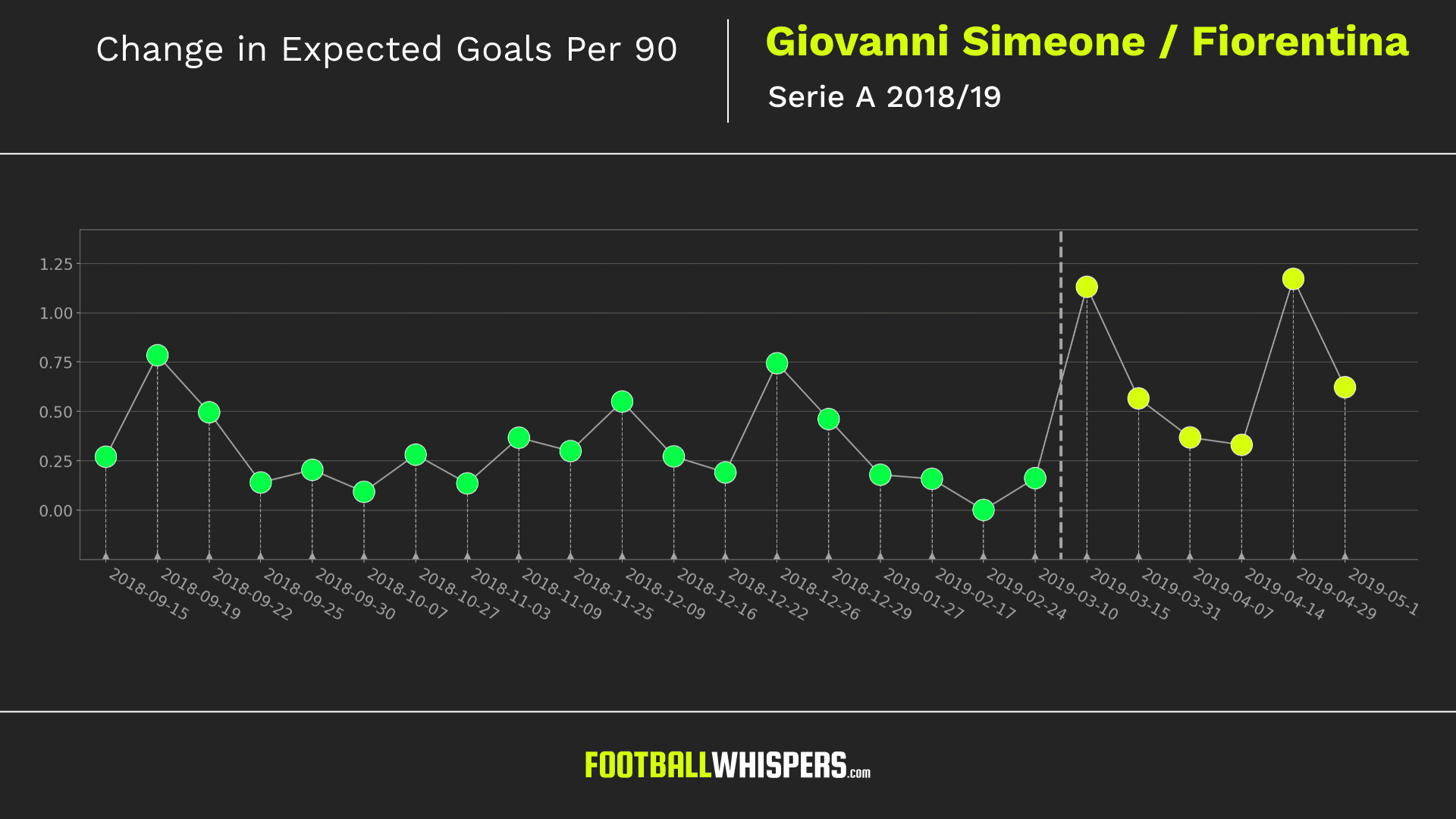 Perhaps even more impressive is just how Simeone has managed it. He's not a high volume shooter. He's taken just 2.42 shots per 90 this season. Of these, just 0.29 come from outside the box and all of his goals have come inside the penalty area.

He's not wasteful with chances in terms of picking the wrong option. But his finishing will need to sharpen up.

However, if you stick him in a better team with better players supplying him and his xG will rise and his actual goal record will quickly follow suit. He might not appear to be the player clubs should turn to in order to improve their attacking ranks but Simeone has the knack of finding himself in good positions on a regular basis. A priceless trait to have.

With Liverpool, Manchester City, Manchester United and Chelsea all reportedly in the market for a forward this summer, Simeone could be a value for money option. A possibility they shouldn't be ignoring.