Tottenham Hotspur know how to bury bad news. Within moments of confirming Christian Eriksen‘s departure, the permanent signing of Giovani Lo Celso had been announced.

Eriksen's exit had long been anticipated. His switch to Internazionale was a formality, be it on a free transfer in the summer or for a nominal fee now. In the end, the Nerazzurri decided they couldn't wait and paid the cash.

Spurs acted quickly, announcing they had paid £27.2million to make Lo Celso's loan move from Real Betis permanent, little more than four months after he moved to England on a season-long loan.

With just 524 minutes of Premier League action under his belt, that might have come as a surprise to those on the outside. Not to Spurs boss José Mourinho who has been glowing in his praise of the Argentine.

“I think the boy is earning the decision [to sign him],” Mourinho said earlier this week.

“He's making an easy decision for the club to execute the option.”

Mourinho continued: “Incredible evolution since I arrived. Barely played a game, I think he played against Red Star Belgrade, with me a little bit difficult to come in the first few weeks.

“But he understood what we wanted. Good learner, good kid.

“By himself he made the decision that the club is going to execute the option. That's normal, he earned it.”

It was not until November 6 and Tottenham's 4-0 win in Belgrade against Red Star that Lo Celso made his first start for his new club. Injury had restricted the former Paris Saint-Germain prodigy to a handful of substitute outings. He got the nod in Spurs' next game, a 1-1 draw at home to Sheffield United, but that was it until Mourinho replaced Mauricio Pochettino.

However, he didn't start consecutive matches again until the turn of the year. His current run of four starts, two in the FA Cup and two in the Premier League, is his best run for the North Londoners.

The fact Mourinho has sanctioned his signing off the back of such a small sample size is testament to just how good he's been in this period.

Capable of playing a variety of midfield roles, Rosario native started out as a versatile attacking midfielder. In his single season with Betis, he netted 16 times in 45 appearances in all competitions, splitting time between No.6, No.8 and No.10.

But despite his goal return, it's further back Lo Celso could prove a vital component for Mourinho's Spurs, finally replacing a much-missed former White Hart Lane favourite: Mousa Dembélé.

Like Lo Celso, the Belgian arrived as more of an attack-minded player – Fulham, after all, signed him from AZ as a striker before he gradually moved to the base of midfield. In doing so, Dembélé became one of the finest in his role, combining the defensive nous of a No.6 with the attacking tendencies, ball-carrying ability and vision of  No.10.

Lo Celso has performed a similar role in the last few games for Mourinho's Tottenham, playing at the base of midfield alongside Harry Winks. Neither is an out-and-out ball winner but, taking his data for the last four games, Lo Celso has still averaged an impressive 3.34 tackles per 90, winning 1.8. Those figures better Winks' (2.21 and 1.38 respectively).

Once in possession, Lo Celso isn't afraid to try things and gets his side up the field. He is a very dangerous ball carrier, slaloming through midfield traffic to complete a whopping 3.6 dribbles per 90, attempting 4.37 – a very high completion rate.

As a result, the 19-time Argentine international averages 7.71 final-third entries and 3.09 touches in the opposition box – Winks hasn't had any in this timeframe.

Although his passing isn't as accurate as Winks', standing at just 82 per cent compared to the England international's 88 per cent, 37.4 per cent of Lo Celso's passes go forwards, which underlines the fact he is a penetrative, incisive user of the ball.

The difference between the two is clear from their passing sonars (below) which show the direction of their passes in the Premier League this season. 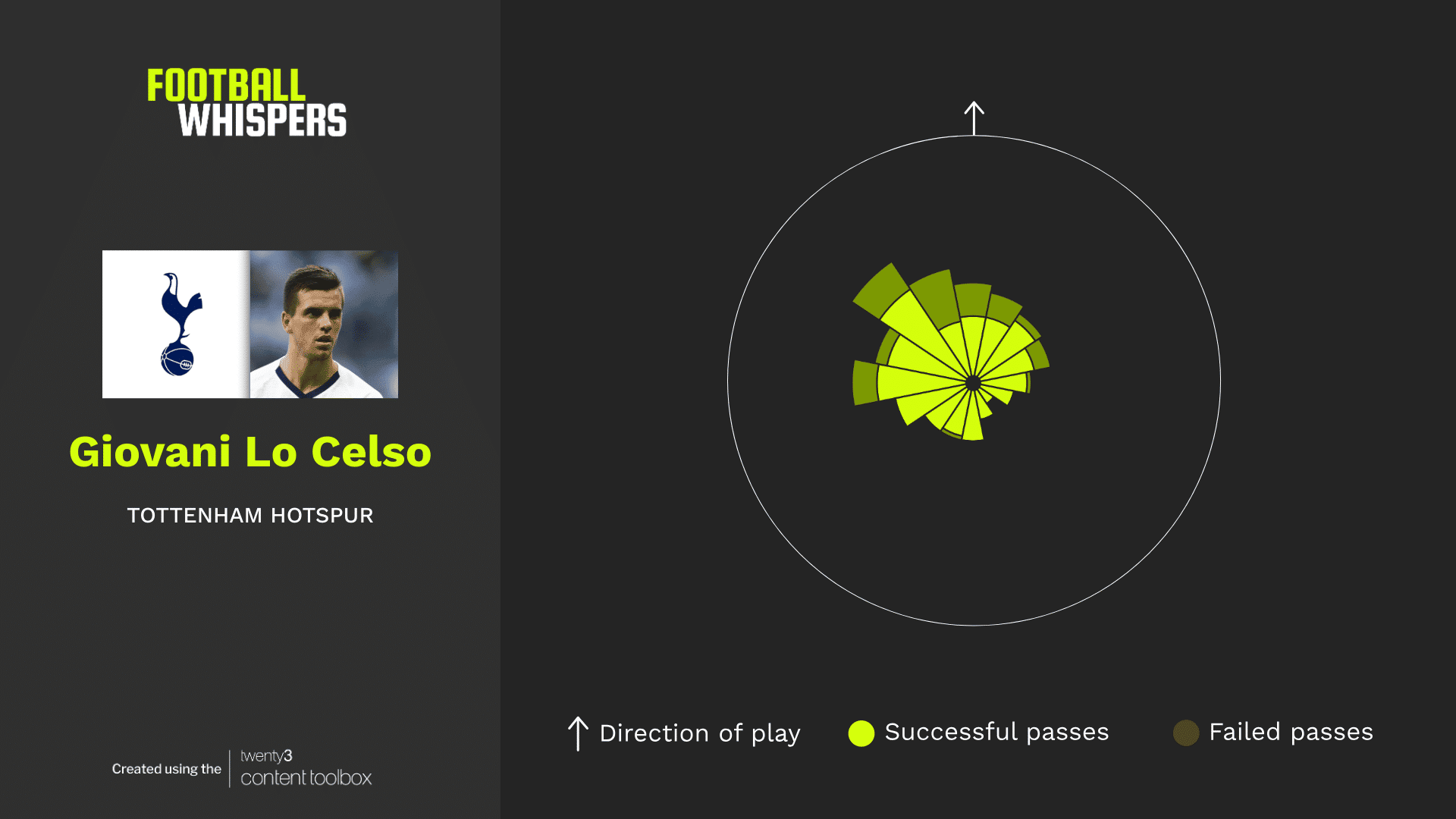 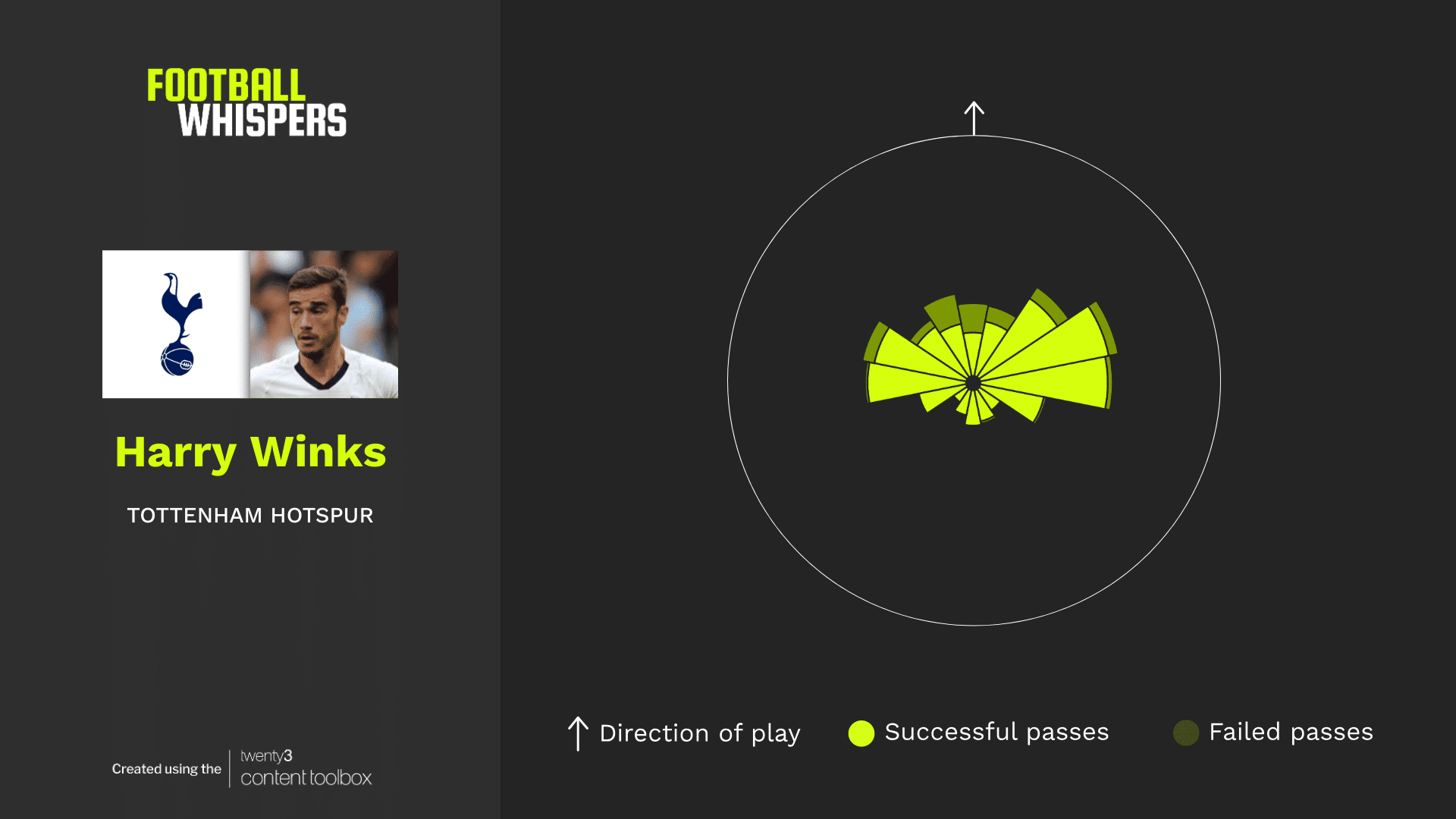 Tottenham have been searching for a midfielder like Lo Celso since giving up on ageing and increasingly injury-prone Dembélé, allowing him to join Chinese Super League side Guangzhou in the 2019 January transfer window.

Spurs have missed someone in front of the back four, and someone knitting things together between the middle and final third. Lo Celso can do both.

Mourinho's sporadic use of Eric Dier and Winks suggests the notoriously hard-to-please Portuguese hasn't been entirely pleased with his central midfield options. Until now. The wait is over.