Paris Saint-Germain knew they had made a mistake with Giovani Lo Celso. But their attempt to rectify the situation came too late. He was gone, this time for good.

Real Betis were the beneficiaries of the Ligue 1 side's error. When they struck a deal to take the Argentine on loan last summer, Betis negotiated a clause that would allow them to make the switch permanent for around £21miliion.

After 15 goals – five of which had come in the Europa League – and four assists, the decision to trigger that clause was inevitable.

PSG did their bit. They tried to convince Lo Celso his future was in the French capital, that he could become a key member of their side. It was all in vain. The 23-year-old had already decided to sign permanently with the La Liga side.

“The club have given me many positive things and I’m enjoying my football,” he said upon signing permanently in April. “I feel comfortable in this team and able to give my best because of this happiness.”

Lo Celso will have known, however, his time at Real Betis would be limited. A stop off on the long road to the top. Even before his switch was made permanent bigger clubs had been linked.

Barcelona and Real Madrid were the most high-profile. Milan were supposedly keen, too. And reports have surfaced of interest from the Premier League, with Tottenham Hotspur and Everton now in the race.

The midfielder has a buyout clause of around £85million, although it is unlikely that would have to be met. Betis are not a financially powerful club and an offer in the region of £50million would reportedly be considered.

Spurs could afford such a fee and Lo Celso is viewed as a potential replacement for Christian Eriksen, who remains on the radar of Real Madrid. Everton also proved last summer they will spend big when required. The Argentina international would certainly be worth the outlay.

Prior to his arrival in Europe in 2016, Lo Celso was regularly deployed at No.10 with Rosario Central. He was the side's creator, the man who would supply lone striker Marco Ruben.

Yet during his two seasons at PSG, Lo Celso was pushed back. He was often deployed as the midfield pivot in Unai Emery's 4-3-3, a role he could perform but not one in which he would thrive.

At Betis, Quique Setién has freed the midfielder once more. As the heatmap comparison below highlights, Lo Celso has been far less involved in his own half of the pitch this season. 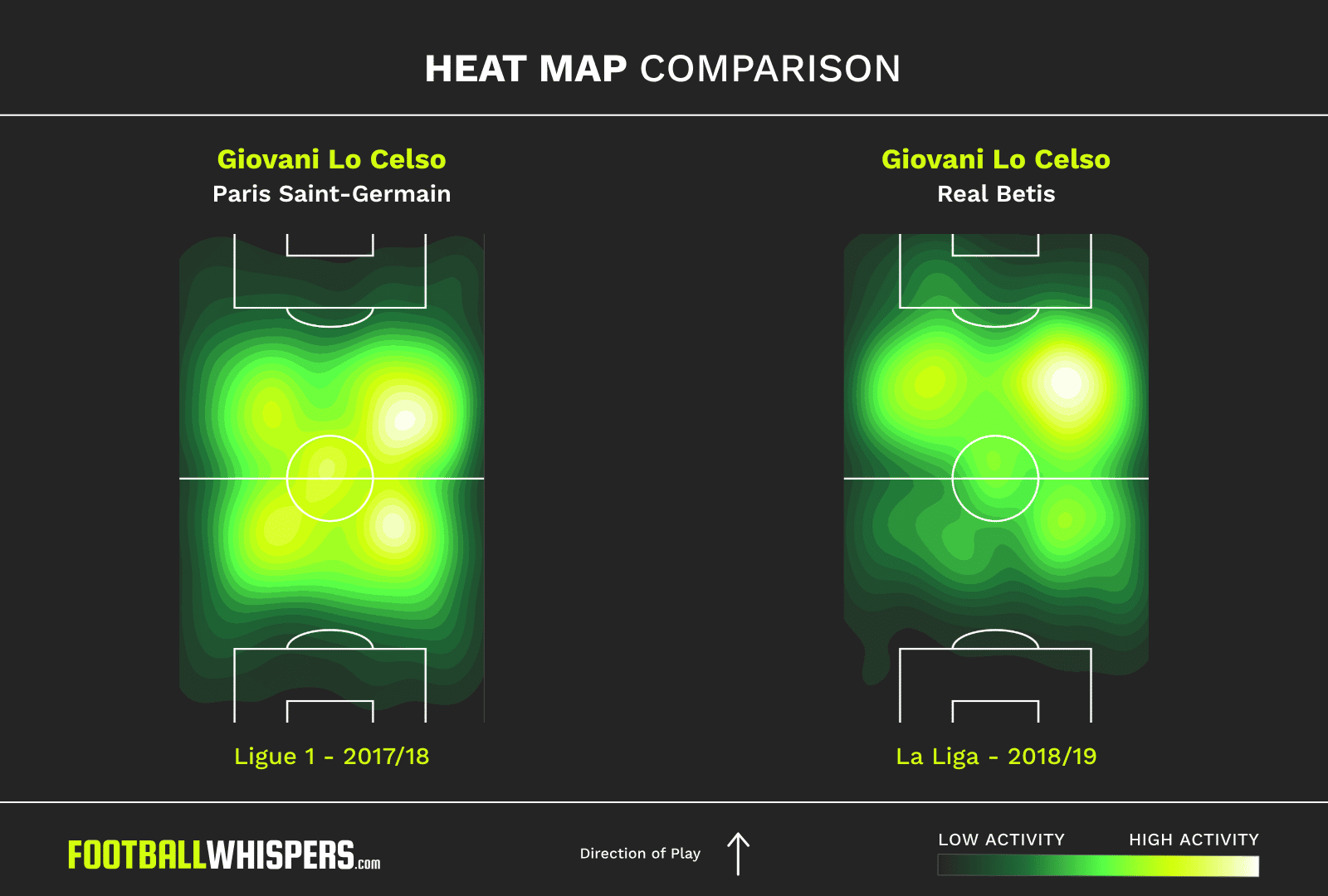 Predominantly deployed on the right of a midfield three but also used further forward off the striker, Lo Celso has licence to roam when Betis are in possession.

He can drop deep to collect the ball or move between the lines of defence and midfield to find space. It's all aimed at ensuring he has space to collect possession, create chances and threaten goal.

The latter is something he's done exceptionally well. Lo Celso is up to 16 goals in all competitions this term, nine of which have come in the Spanish top flight.

Yet this isn't simply a midfielder on a hot streak in front of goal. Lo Celso's expected goals of 8.68 – the third highest achieved by a La Liga midfielder this season – highlights he converts the good-quality chances presented to him.

He's achieved this through evolution. In a change from his days in Argentina, Lo Celso is no longer just a schemer. He has become a poacher. And that's why eight of his nine league goals have come inside the penalty box, although two are penalties. 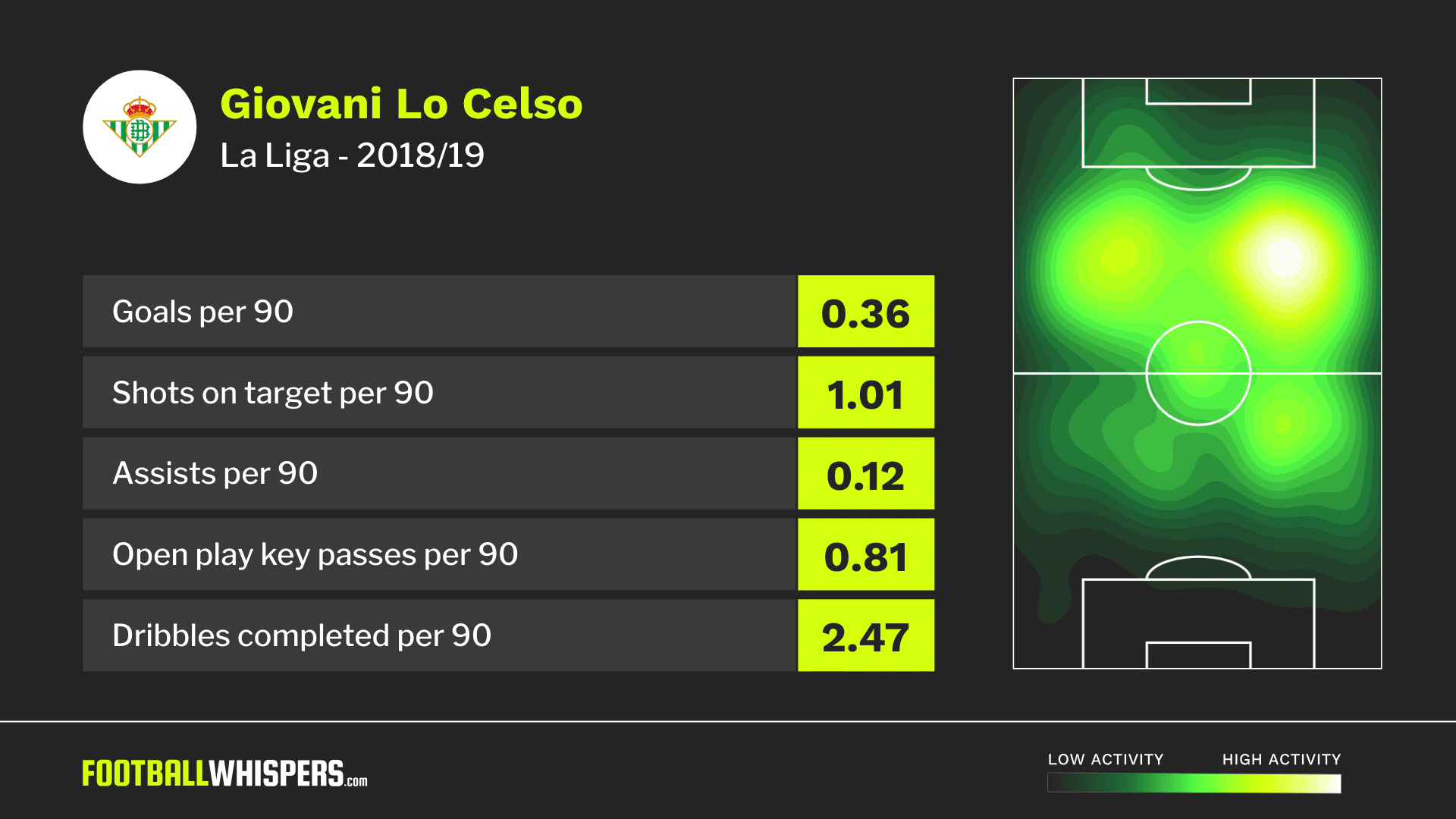 Lo Celso has also blossomed into one of Betis' leaders. At PSG he was the young kid from Argentina in a team full of stars. In the south of Spain, there is far more responsibility placed on his shoulders.

It's something he's relished and there have been standout performances on the biggest stages.

Against Barcelona at the Camp Nou in November, Lo Celso scored to help Betis clinch a famous 4-3 victory. There was an exception goal and assist against Milan at San Siro in the Europa League to ensure the La Liga side left with a 2-1 win. He also netted in both legs against Rennes later in the competition.

The goals and assists are the headline grabbers but its Lo Celso's overall impact against elite opposition has stood out. For instance, against Milan, his ability to slalom beyond challenges in midfield started several attacks. It was the same against Barça, too, as he drifted past Ivan Rakitić and Sergio Busquets on multiple occasions to open up the pitch.

Born in Rosario, left-footed, with excellent close control, a neat turn of pace, and a goal threat, it's unsurprising Lo Celso has been likened to Leo Messi in certain quarters. Yet such a comparison is trite and unfair on the midfielder.

Lo Celso is a star in his own right. One who is primed for another crack at a club in the Champions League.

Tottenham could offer him such a stage and he'd certainly fit in under Mauricio Pochettino. Not only does he score and create but the 23-year-old wins back possession in the attacking third 0.93 times per 90, the sixth highest average among La Liga midfielders.

He wouldn't be a like-for-like replacement for Eriksen but he would certainly soften the blow should the Dane depart for Madrid this summer.

It's harder to see him at Everton, though. Not only because the club aren't at Europe's top table but also because of Gylfi Sigurðsson.

Marco Silva has favoured a 4-2-3-1 system for much of the campaign and the Icelandic star has been the No.10. Lo Celso could fulfill a deeper role at Goodison but it would be a waste of the Argentine's undoubted talents.

PSG realised that too late. Lo Celso has ensured no other club will make the same mistake.