Managers frequently get criticised for trying to fit square pegs into round holes, playing their players out of position due to a hunch or feeling they can accommodate a new role.

This season, Paris Saint-Germain‘s Giovani Lo Celso is the perfect example of why it can work and why, sometimes, you should trust what the coach has seen in training, rather than where you play him on Football Manager.

Arriving from Rosario Central, the Argentine midfielder was known as a playmaker. It was thought the 21-year-old would fight with Ángel Di María, Javier Pastore and Julian Draxler for minutes. And, at the end of last season and the start of the current campaign, that was true.

Mostly appearing off the bench, it wasn’t until the home fixture against Lille that he grabbed his opportunity with both hands. But not where you might expect.

Adrien Rabiot had to come off at half-time and Lo Celso made his entrance, playing in the centre of the park. He has started every game since, often as the deepest of the three midfielders, playing as Paris Saint-Germain’s anchor.

Going into 2018, the Parisians had found a solution to a problem in the most unlikely of places and Unai Emery was full of praise for the young South American.

“He arrived at the club a year ago and has worked very hard and patiently to create opportunities for himself,” Emery said. “He played one minute, then two, then 15… He has earned more and more playing time. He has improved, progressed by working hard. He's a good example. He has trained at playing the No.6 position in training and he has done well in this position in matches.”

Who is Giovani Lo Celso?

Signed from Argentina in the summer of 2016 for £9million, he stayed in his homeland until last January, picking up ten assists in 45 games for Rosario before arriving in Paris.

Across the Atlantic, he was known for his creativity and guile. But he has reinvented himself as a ball-winning midfielder who recovers possession for fun.

It’s an incredible transformation, and even more so in a team who average 63.9 per cent possession each game. The Argentine midfielder doesn’t just lead his team; he leads the league for tackles won per 90 among players making ten or more appearances.

With 21 appearances and 969 minutes of league action under his belt, Lo Celso is successful with 4.6 of the 7.3 tackles he attempts per 90 minutes.

His nearest rival is team-mate Dani Alves with 3.6 per 90. Former Barcelona transfer target Marco Verratti and Rabiot fall behind on 2.9 and 2.4 respectively. It’s a skill which no-one, perhaps even Lo Celso himself, knew he had.

Ten teams make more tackles per game than PSG, but the next contender, Caen’s Adama Mbengue, trails the 21-year-old by 0.5 challenges per 90.

What are Lo Celso’s strengths?

The reasons you’d pick out the youngster have changed this season, but it’s also helped him perform at the level he has. Tenacious and tough in the tackle, he times his movements very well, only going to ground when he needs to.

Lo Celso uses his body extremely well, frequently recovering possession by getting between the man and the ball and using his upper-body strength to great effect. 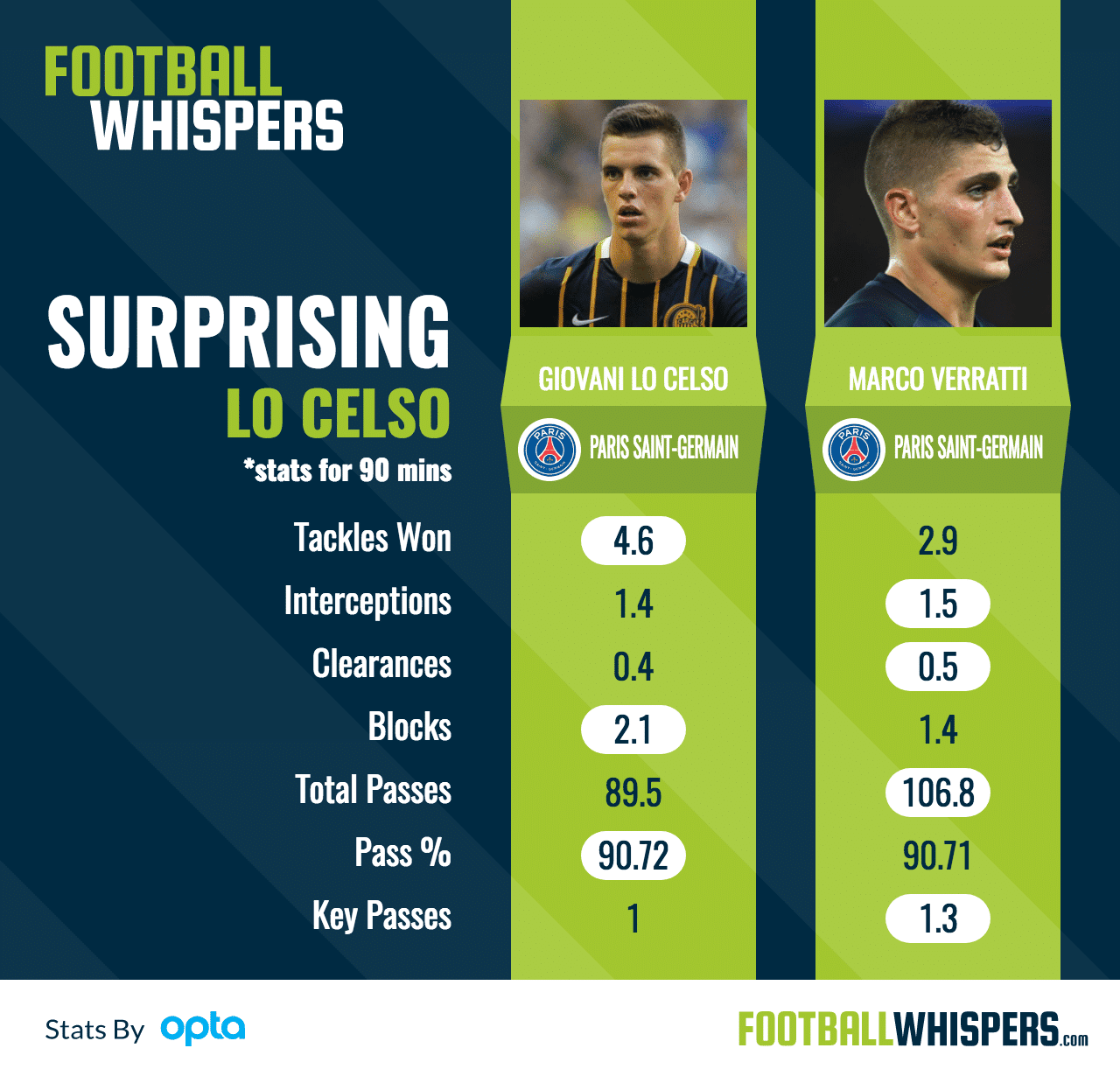 In the recent 3-0 win over Lille in northern France, there was a perfect example of his defensive strengths.

He outmuscled defender Edgar Ié off the ball deep in his own half, but then spun on the ball, around the right-back, and used his pace and quality to race out of trouble into the centre of the park.

Due to his excellent close control and comfort in possession he has the much-lauded ability to push the ball out from the back, transitioning the game and putting PSG on the attack.

He’s not completely forgotten his flair in the final third either, which helped the Parisians seal victory over Lille.

Picking up the ball just outside the home side’s penalty area, the Argentine pulled the sand wedge from his bag and chipped Lille keeper Mike Maignan with a lovely effort from the edge of the box.

His skill to play at both ends, providing defensive support and danger in the final third, is something we haven’t seen enough from Verratti over the years and could be the element of Lo Celso’s game which helps him keep his place in PSG’s star-studded team.

What are Lo Celso’s weaknesses?

Where he could struggle in this position is in the air. He’s managed to avoid that part of the game so far and has yet to compete in, never mind win an aerial battle this season. Up against bigger, stronger teams, it’s unlikely Emery would be able to carry both Lo Celso and Verratti.

Still young, he can only improve in this area and his all-round game. His positioning and understanding of the role will improve with minutes on the pitch.

With Kylian Mbappé, Neymar, Edinson Cavani and Di María ahead of him in the attacking stakes, there could be a huge future for him in this deeper role.

With Thiago Motta starting to creak, the Paris club had been on the lookout for a new defensive midfielder. Lassana Diarra joined in January, but if Lo Celso continues to impress he could grow into the long-term solution.

What does the future hold for Lo Celso?

His biggest game of the season could be on the horizon this week. PSG travel to Spain to face Real Madrid in the first leg of their last-16 tie and it’s a huge occasion for both clubs.

After buying Neymar and signing Mbappé on loan, a last-16 exit would be a disaster for Emery. Meanwhile, reigning champions Real won't be contemplating elimination either. But someone must fall.

As Diarra picks up more playing time – he is also familiar with the Santiago Bernabéu – Emery might give the veteran the nod on Wednesday, rather than risk Lo Celso in the midfield against the imperiois Luka Modrić and Toni Kroos.

It would be a shame for the Argentine, but an understandable decision to make.

However, play and perform well and the secret of this ever-improving talent will be out.

There’s not much he can’t do in the midfield and, rather than unearth the next superstar, it looks like PSG may have stumbled across the solution to their biggest problem in one of their most exciting young prospects.