Georginio Wijnaldum is the definition of an enigma. In a world dominated by stats, what he does can rarely be quantified and it's why so many struggle to appreciate him.

In several ways, he’s the midfield version of Roberto Firmino. Generally, Wijnaldum star manipulates space to give Liverpool an advantage. He keeps play nice and simple in order to retain possession and keep the Reds ticking over. The Dutchman is a facilitator.

Wijnaldum plays the sidekick role to perfection and it’s why he’s one of the first names on Jürgen Klopp’s teamsheet. Like many other players turning out for the Reds, Wijnaldum has more in his locker yet he carries out instructions to ensure the needs of the team are put before his.

For the Netherlands, he’s a goalscoring number ten. For the Reds, he’s played as a false-nine, as a wide forward, as a centre-back, as a number six and as a box-to-box midfielder. In certain games, however, he manages to bundle all of the above together. It just so happens these matches tend to be key ones for Liverpool.

While he wasn’t named man of the match against Manchester City, he was arguably the most effective player on the Anfield pitch as the leaders romped to a 3-1 victory. He didn’t score and he didn’t grab an assist but he put on a midfield clinic in what could be described as stormy conditions.

It was end to end, a traditional slugfest with the early goals for Liverpool meaning City had to attack. Last year, Pep Guardiola’s men sat back and looked to frustrate as they held the hosts to a 0-0 draw.

It was frantic and chaotic yet Wijnaldum seemed to operate in the eye of the storm. He never seemed rushed, he was never flustered and City couldn’t get near him. Not only that, though, he was operating in all areas of the pitch. 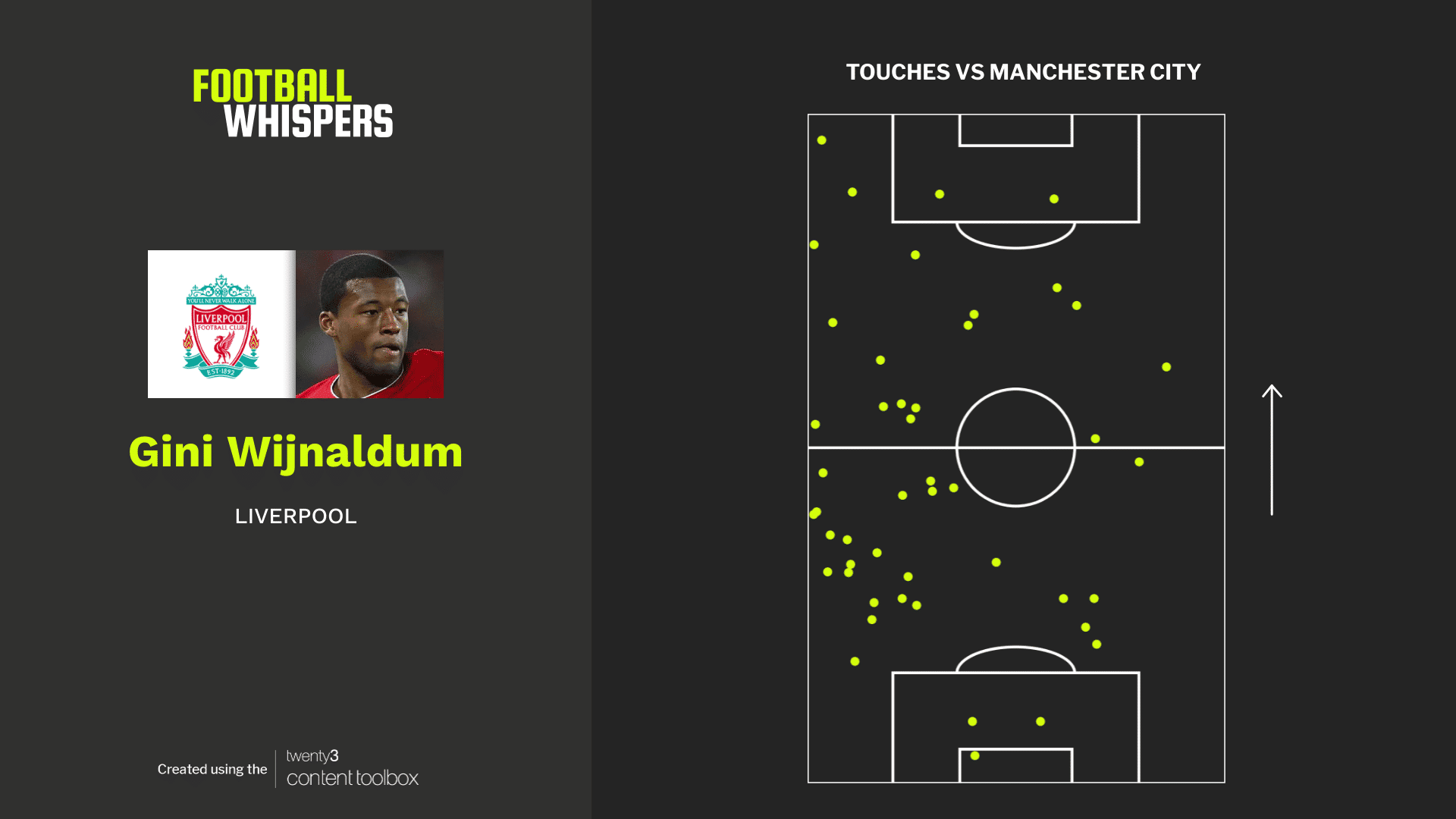 Against City, he was near untouchable and finished the match with a 97 per cent pass success rate having misplaced just one.

The Liverpool No.5 also completed 50 per cent of his dribbles, made one tackle and one interception. For once, his involvement could be quantified but even those numbers do a disservice to his performance against the champions.

In the past, he's posted similar numbers but he's done so having played a much safer game. Against City, however, it was anything but safe. The 29-year-old was pinging cross-field passes into feet. He was dancing his way out of tight spaces and generally looking to get Liverpool onto the attack at every given opportunity.

While he was much more expressive, he still remained considered when on the ball. His weight of pass was always perfect. There was always a measured approach to what he was doing even though the game was frenetic.

It was a Wijnaldum masterclass in a big game; a regular occurrence for the former Newcastle United man.

During his debut season with Liverpool, he netted the winner against Manchester City on New Year’s Eve, scored the equaliser against Chelsea at Anfield, and rounded off the home win over Arsenal with a goal in the 91st minute after a run from inside his own half to support Divock Origi.

Then, with the Reds in the hunt for Champions League football, Wijnaldum scored an equaliser against Burnley – a game Klopp’s men went on to win –before he smashed home the opener on the final day of the season as Liverpool secured a top-four finish with a win over Middlesbrough.

He also found the back of the net against Roma at Stadio Olimpico during the 2017/18 campaign to help secure Liverpool's place in the Champions League final.

Last season Wijnaldum netted just five times for the Reds. The first arrived at Wembley in a 2-1 win over Spurs, he added his second in the 3-0 victory against Bournemouth and fired in the opener as Liverpool eventually beat Cardiff City 2-0. The latter was a big moment with Neil Warnock's side frustrating the Reds until the Dutch master expertly rifled home Trent Alexander-Arnold's corner.

Then that game happened. The former PSV captain started on the bench against Barcelona but replaced Andrew Robertson at half-time. Within 11 minutes of his introduction, he'd changed the game completely.

With 52 minutes on the clock, Wijnaldum arrived late into the box to lash home another Alexander-Arnold cross. And with Barça reeling, the versatile midfielder rose highest to guide home Xherdan Shaqiri's pass. In the blink of an eye, he wrote his name into Liverpool folklore.

Wijnaldum is Klopp's secret weapon, and few have realised this is the case. He plays a defensive role so well that people forget how useful he is when given a little more license to express himself on the ball.