The Liverpool midfielder is apparently Plan B for Zinédine Zidane’s side if Eden Hazard, who tops their summer wishlist, doesn’t arrive at the Estadio Santiago Bernabéu.

Since arriving at Anfield from Newcastle United for £23million last summer, the Dutch midfielder has been hugely impressive, scoring five goals and assisting six more and becoming a crucial part of Jürgen Klopp's side.

But obviously, moving to Los Blancos, as TuttoMercatoWeb suggests is a possibility, would be yet another step up in his career.

Is Wijnaldum ready for Real Madrid?

The 26-year-old is definitely a man for the big occasion, as fellow Football Whispers staff writer Sam McGuire has written about here.

As he points out, the former Feyenoord man isn’t someone for shirking the important games.

He started off the season with an assist in Klopp’s side’s 4-3 win over Arsenal, and also scored the match winner against Manchester City on New Year’s Eve, with his next goal arriving in a 1-1 draw against a seemingly unstoppable Chelsea side.

Sam writes: “The Liverpool No.5 was pivotal in their 2-0 win over Tottenham Hotspur in a match which could have all but ended their Champions League hopes.

“His incisive pass cut Mauricio Pochettino’s men open as Sadio Mané finished with relative ease to put the home side ahead.

“Arsenal were the next visitors at Anfield to feel the force of the Wijnaldum express.

“Alongside Emre Can and Adam Lallana, he made up one third of a midfield which utterly dominated the away side, scoring the third in a 3-1 win to put the icing on the cake.”

Real Madrid won’t want someone who will wilt in the big occasions, and there’s no doubt that Wijnaldum has the ability and character to step up when necessary, as he’s shown at Liverpool this season.

Where would Wijnaldum play at Real Madrid?

The Dutch international’s versatility would obviously be a big attraction for any suitors.

In fact, that was something that attracted Klopp to him.

“I am so happy that we have got him,” said the Liverpool boss upon Wijnaldum’s arrival at Anfield. 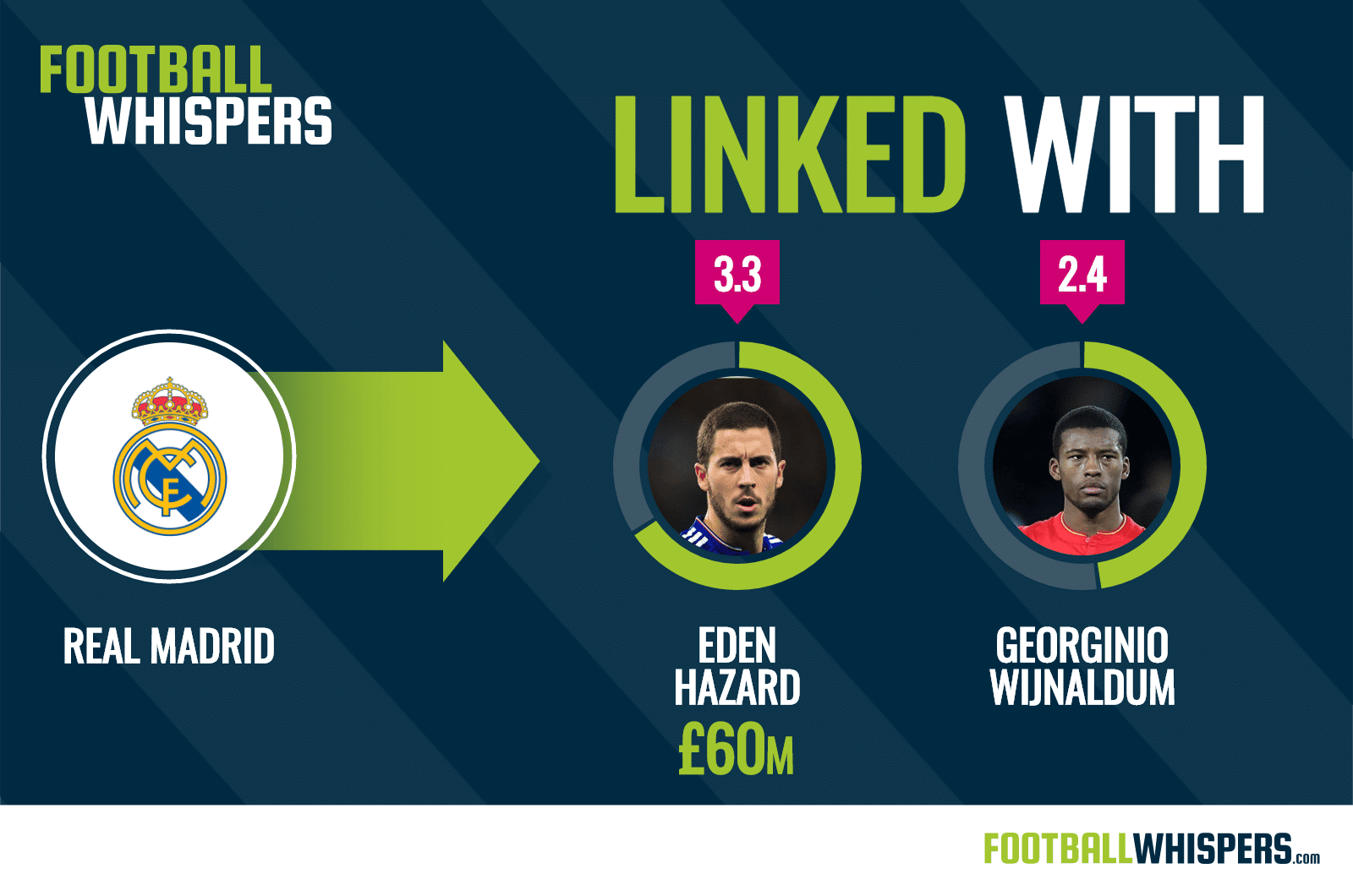 “I think he can be a great player for us.

“He has already shown some really good moments in his career but the most exciting and important thing for me and my staff is that there is still so much extra to come from him.

“He can play a few positions for us and players that come through the Dutch system usually have a good tactical understanding and flexibility, that’s really important.”

And whereas Hazard could only play in the front three of Madrid’s 4-3-3, you would expect Wijnaldum to mainly function in the midfield three, where Luka Modric, Toni Kroos and Casemiro currently operate.

But like Isco, James Rodríguez and Marco Asensio, Wijnaldum is capable of playing in both the midfield or front three, something which would surely appeal to Zidane.

How does Wijnaldum compare to Real Madrid options?

If you compare Wijnaldum to the above trio of Isco, James and Asensio, he doesn’t really stand out in terms of statistics based on their league performance this season. 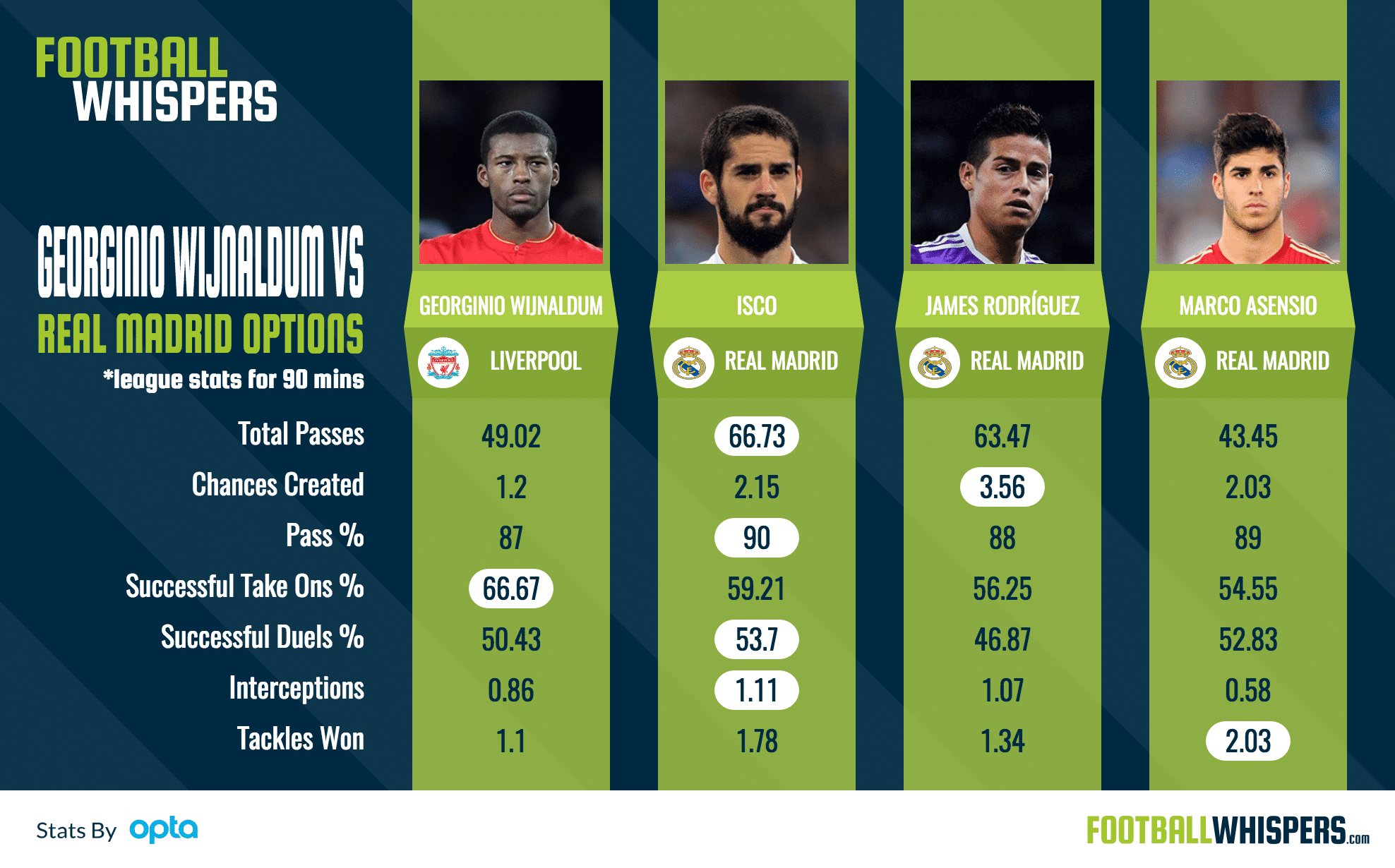 Indeed, if you look at the stats we’ve used to compare them, he only comes out on top in terms of successful take ons (66.67 per cent).

And with Real Madrid look set to offer Isco a new contract, when you look at his stats compared to the others, it’s clear why.

By contrast Wijnaldum makes just 49.02 passes per 90 minutes with a passing percentage of 87 per cent.

It shows you just how high the standard is in the Spanish capital when you see that the impressive figure of 87 per cent passing accuracy is the lowest out of the quartet.

The Liverpool man also wins 50.83 per cent of his duels and averages 0.86 interceptions per 90 minutes.

And again, if you compare him to Madrid’s midfield three in the 4-3-3, which is where he’s mostly been playing for Liverpool this season, he doesn’t come out too favourably. 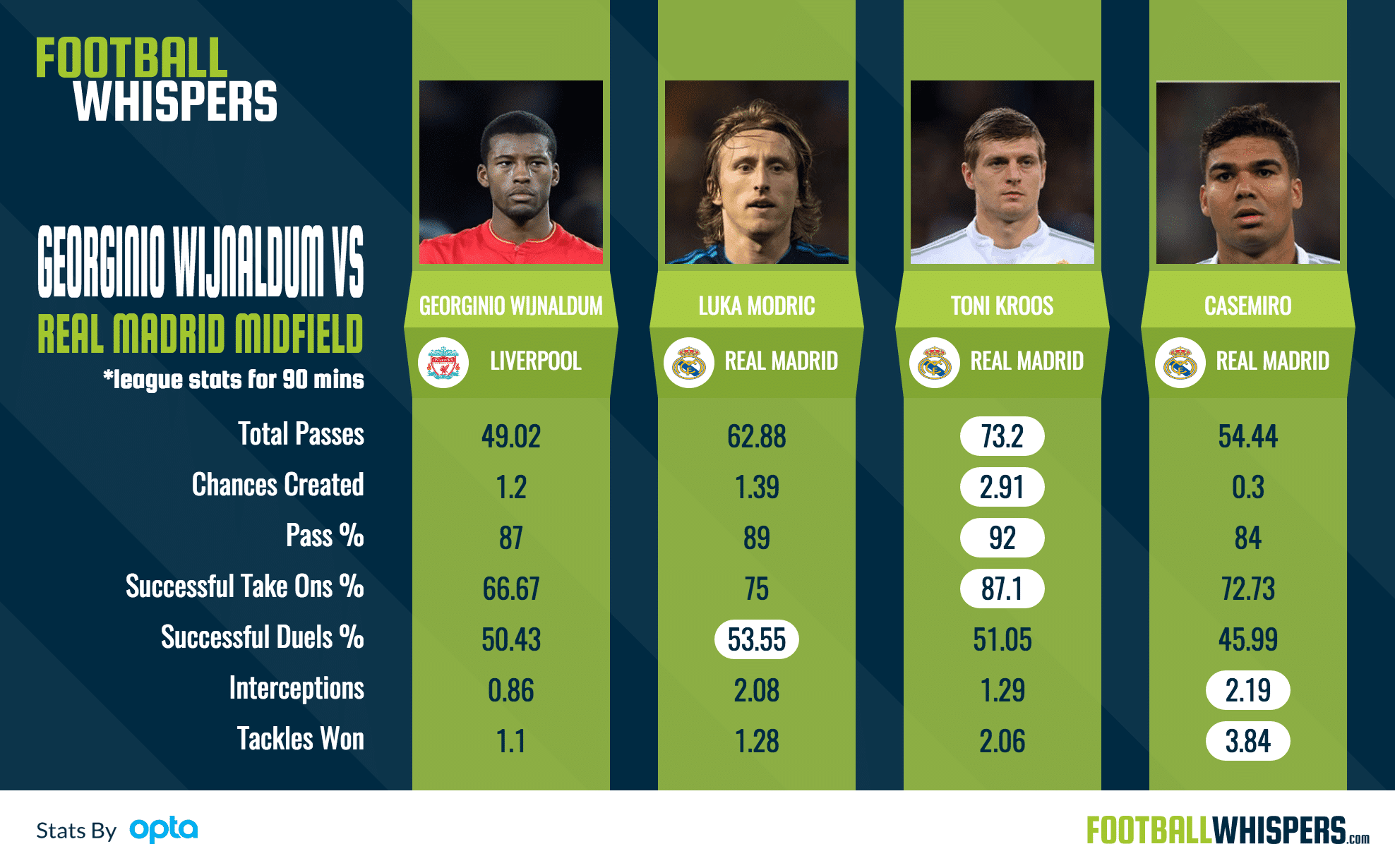 Modric and Kroos, who he’d be coming up against, considerably outperform him statistically, as you can see above.

But, he’s playing a role that he’d never played before in England, so you have to take that into account.

“It’s difficult to compare my role here to the one I played at Newcastle,” he told the Liverpool Echo last year.

“Towards the end at Newcastle I was playing on the left side. At the beginning I was playing as the No 10. I was almost the only midfielder in front of the goal behind the strikers.”

And you would assume he’ll thrive even more if he carries on in that role.

But, at the moment, he would be an unlikely starter for Zidane’s side if he moved to Spain, but you wouldn’t bet against him proving himself.

There were doubts when Liverpool signed a midfielder from a side who’d just been relegated, and Wijnaldum proved them wrong.