Shrewsbury recorded a big win to all but secure their safety last week. Will they step off the gas as they face Gillingham? Find out with our Gillingham vs Shrewsbury match preview with free tips, predictions and odds mentioned along the way.

Get your Gillingham vs Shrewsbury tips here

Gills to come out on top

The Gills might be coming off the back of a shoddy away performance but things should be different back on their own turf. They are unbeaten on their own patch across the last five with four wins banked. Shrewsbury are quite the contrast; they've just recorded a great win but in respect of away games their recent displays are all rather ‘meh'. On paper, four of their last five away matches have been against relegation scrappers. They've managed to lose to two of them.

With this both teams to score prediction we would suggest more of the risk is placed on Shrewsbury; they've hardly knocked goals in for fun this year given a rate of 1.2 per match. For comparison, Gillingham have notched at a rate of 1.4. More recent analysis would show that Shrewsbury have scored in six of their last seven away games. Gillingham have failed to find the net in two from 10 home matches but have bagged 18 across that same period. With figures like those, it's completely plausible both sides get on the score sheet.

Gillingham to lead at the break and see it through

The Gills have taken a half time lead in 13 times this campaign. Only twice have they dropped points from that position. Their visitors on Saturday have trailed at the interval in 12 matches so far this season; only once has the match not ended in defeat for them. It's a good omen for Gillingham who have scored first half goals in five of their past six home matches. It's also worth noting that last time these two sides met at Priestfield Stadium Gillingham ran out 2-0 winners courtesy of two goals before the break.

Shrewsbury's 3-0 win over Plymouth last time out has effectively secured their place in League One for next season. That means we'll be seeing this fixture again next year because Gillingham aren't going anywhere either. With little to play for but still several game weeks left before the end of the season, we should be in for a reasonably entertaining encounter.

Important Questions for Gillingham vs Shrewsbury 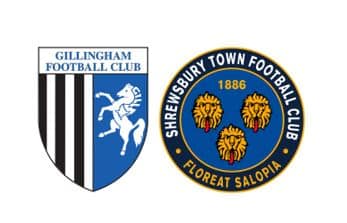