Both these sides had good results last time out with Gillingham beat Peterborough and Northampton smashing Ipswich. Who will win when they face each other? Find out with our Gillingham vs Northampton match preview with free tips, predictions and odds mentioned along the way.

Both Gillingham and Northampton will come into this match happy with their displays in the week with Northampton having turned in a mighty impressive performance to record their best result of the season; at least it was in pure score line terms. Unfortunately for them, it's their away form that is the trouble. They're currently winless in 14 away from home. Their hosts have been decent on their own patch of late too with a run of six games undefeated having won four and drawn two. Gillingham have won four of the past five meetings between the pair at the Priestfield Stadium too.

Northampton to go down swinging

This prediction isn't one that's easily backed up with recent form but it's still driven by data. Gillingham's home form in the both teams to score market is reasonable with three of their last five seeing both teams net, however, Northampton's away fixtures have only seen goals on either side in two of their past five. Stats like that make this one somewhat of a coin flip. Thankfully, we've got head to head data to make our mind up; of the last 10 meetings seven of them have seen both sides score goals.

Oliver to be back fit and in the goals

Oliver missed out on the action in the week due to a niggle but he's expected to be fit to face Northampton. That's a huge boost for the home side. Not only is he their top scorer with 15 league goals but he's in form too; he's scored eight goals in his last 10 appearances including in his previous outing.

Gillingham vs Northampton: All the pre-match information you'll need

Gillingham look set to fall just short of the playoffs despite their best efforts throughout this season. More worryingly, Northampton look like they might have a similar problem but in the battle to stay in the division. Their performance against Ipswich in the week will have given them hope but they need to follow it up if it's not to be meaningless. 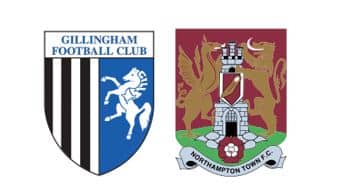