Perhaps André-Pierre Gignac should have refrained from getting so snap-happy on his holiday. The French striker has kept his fans up to date of his every move in South Californian, posting images of himself and his family at the pool, at the basketball and, rather bizarrely, with Pierre-Emerick Aubameyang on Venice Boardwalk.

From those Instagram posts, however, has come transfer speculation. Reports in Mexico claim Gignac is on the radar of the LA Galaxy, with the Carson club looking to add an out and out centre forward to their squad. Many journalists believe the Frenchman is in California for more than just a holiday.

One report states the Galaxy are willing to pay as much as $25 million to activate the release clause in Gignac’s contract at Tigres. Such a deal would make him the most expensive player in Major League Soccer history. But LA Galaxy head coach Curt Onalfo needs a frontman to lead his attacking line and Gignac fits the bill.

Tigres president Alejandro Rodriguez was quick to quell any suggestion that a formal offer has been made for the striker, instead claiming Gignac is only in California on his summer holiday.

“He went to visit Mickey Mouse and Donald Duck with his family, but you guys [in the press] keep talking about the teams interested in our players,” he said.

So what would the LA Galaxy be getting should they seal a deal for Gignac? At 31, the former Marseille striker is into the twilight of his career. But he would arrive in Carson with a great deal of experience and know how, not to mention a fine scoring record which has seen him net 53 times in just 81 appearances in Liga MX. That’s what Onalfo is looking for. That’s what everyone in MLS is looking for.

For all that the LA Galaxy have enjoyed an upturn in form in recent weeks, going seven games without suffering defeat, a reshuffle is still required at StubHub Center if they are to qualify for the play-offs and make an impression on the play-offs later in the season. The Galaxy have lost a lot of quality and experience from their squad over the past 12 months and they must find a way to compensate for that. 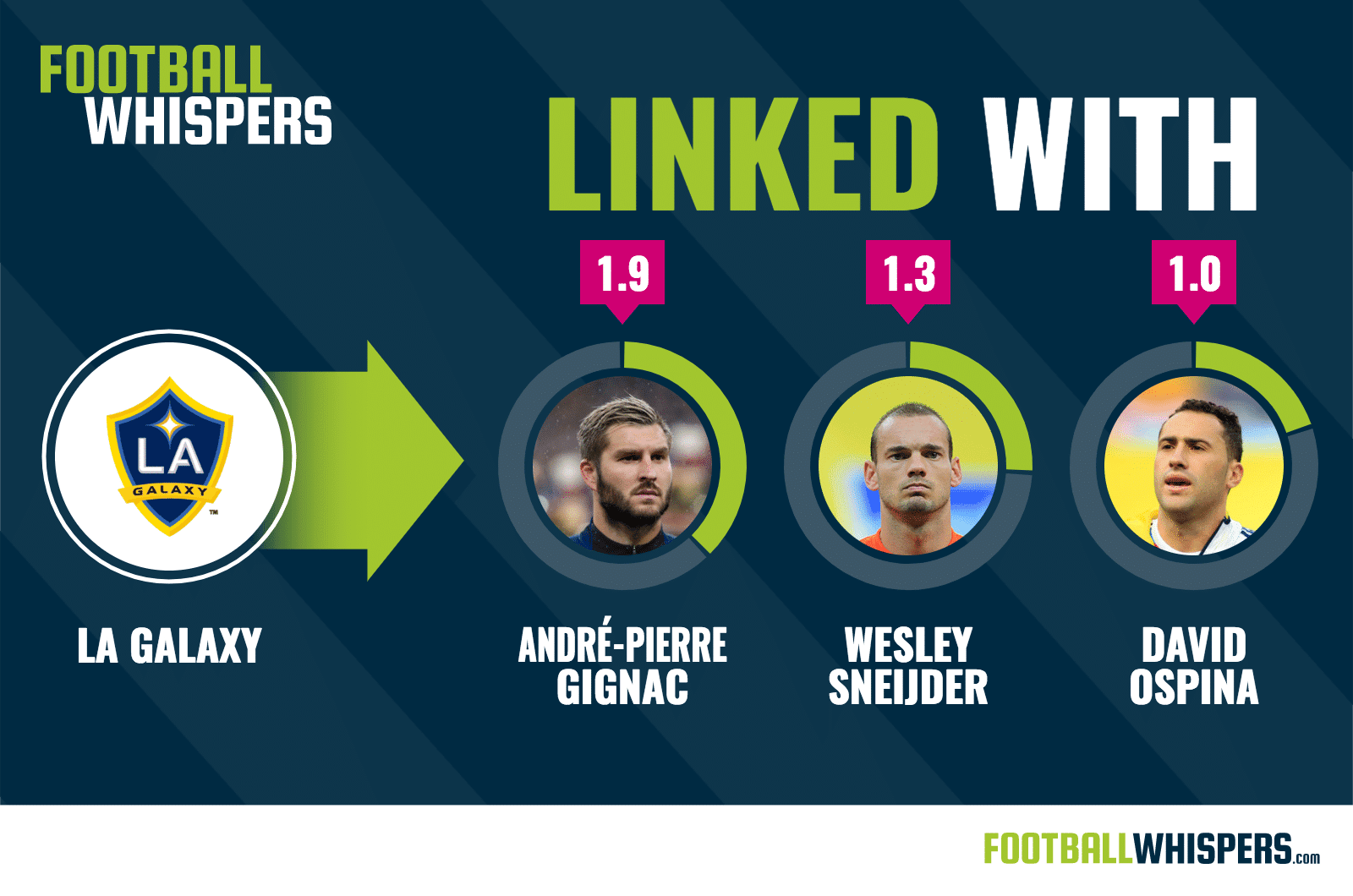 Signing Gignac would go some way to addressing this. He would be used as the focal point of the LA Galaxy’s attack, which is still to find a settled form in the post-Robbie Keane age.

It hasn’t helped that Giovani dos Santos has spent so much of the campaign on international duty, with the Mexican at the Confederations Cup this month, but even with the former Barcelona and Villarreal attacker as part of the equation, reinforcements are needed.

With Zlatan Ibrahimović expected to make the move to Los Angeles FC for the start of the 2018 season, the Galaxy are having to look elsewhere. This could be the beginning of a trend in Southern California.

LA Galaxy have had it all their own way in Los Angeles for so long, collecting trophies and big name signings like Panini stickers. Now, however, they face the prospect of being eclipsed, particularly in the transfer market.

This happened in the shifting dynamic of the New York soccer rivalry with New York City FC now considered the city’s marquee side after years of the New York Red Bulls holding that unofficial title. This serves a warning to the LA Galaxy, who could find themselves in a similar situation in the not so distant future, as illustrated by the battle for the signature of Gignac.

The French international might suit the Galaxy better than Ibrahimović. Gignac isn’t the most mobile striker but he displays a willingness to run the channels and get in behind in a way Ibrahimović often doesn’t.

Given he will be flanked by the likes of Gyasi Zardes and dos Santos, the Galaxy need someone to fit the overall identity of their side. Gignac might do that.

There have also been rumours linking Arsenal goalkeeper David Ospina with a move to South California with the LA Galaxy looking to replace Brian Rowe as their number one. While the Colombian international would undoubtedly strengthen Onalfo’s hand, is finding a new shot-stopper really a priority for the Carson club right now?

Everything the Galaxy do this season will be viewed through the prism of their impending future, a future that will see them face competition from LAFC for their own patch. They must be smart in the transfer market and the signing of Gignac might be the smartest thing they could do right now.