The nickname bestowed upon Romania's legendary creative talent, Gheorghe Hagi, could not have been more fitting. Being labelled the ‘Maradona of the Carpathians' was especially apt, for he was both an exceptional footballer and a player who had an extremely volatile temperament – inherently made him rather similar to his Argentine counterpart.

Born on 5 February 1965 in Săcele to parents of Macedonian descent, the signs of his love for the beautiful game were present from a young age. Despite his tough upbringing, his grandparents' resourcefulness in making footballs out of pigs' bladders and from cloths gave him the basic tools to develop his skills.

Coming through the ranks with Farul Constanta and Luceafarul Bucuresti afforded him the chance to hone his craft for a career in the professional game. Joining Sportul Studentesc represented a young Hagi with the opportunity to do just that at 18. But after four fantastic years at Sportul, Romanian giants, Steaua Bucharest, quickly snapped him up in a deal shrouded in controversy.

At the request of Valentin Ceausescu, whose father was the former Romanian dictator, Nicolae Ceausescu, Steaua bizarrely signed him on loan purely for the European Super Cup final in 1987. Hagi would go onto play a crucial role in Steaua's 1-0 win over Dynamo Kyiv – scoring the winner.

Strangely, despite the contract being valid for the final only, Steaua refused to let him go back to Sportul after his magnificent performance. Sportul received nothing for their star student, and due to the nature of Steaua's power brokers being people not to be messed with, Sportul were advised not to challenge the gross injustice.

Hagi, however, did not let the situation affect him and continued his remarkable upward trajectory. Over the course of his three years in the capital, spanning 1987 to 1990, the stocky playmaker dazzled domestically and abroad – his mesmerising passing and dribbling capabilities unlocking defences all over Europe.

Unsurprisingly, interest from the likes of Arrigo Sacchi's AC Milan and Jupp Heynckes' Bayern Munich arrived, but the communist government would not allow Romanian footballers to play for foreign clubs at the time.

This all changed in 1989, though, when Nicolae and Elena Ceausescu were executed for ‘crimes against the state'. While this has far-reaching ramifications for the Eastern European nation, in footballing terms it paved the way for the draconian ban to be lifted.

By the stage Hagi was ready and permitted to leave Steaua, he had racked up some outstanding achievements. Aside from scoring a tremendous 76 goals in 97 league matches, he had also won three league titles, two Romanian cups, that infamous European Super Cup and was an integral component of the team that reached the 1988/89 European Cup final.

The Steaua man was selected for the first of three World Cups as Romania made it through to the Round of 16 at Italia 90 – where Hagi played against Maradona and Argentina in the group stage. Romania famously went on to lose to the Republic of Ireland in a penalty shoot-out – David O'Leary the unlikely hero for the Boys In Green that day in Genoa. 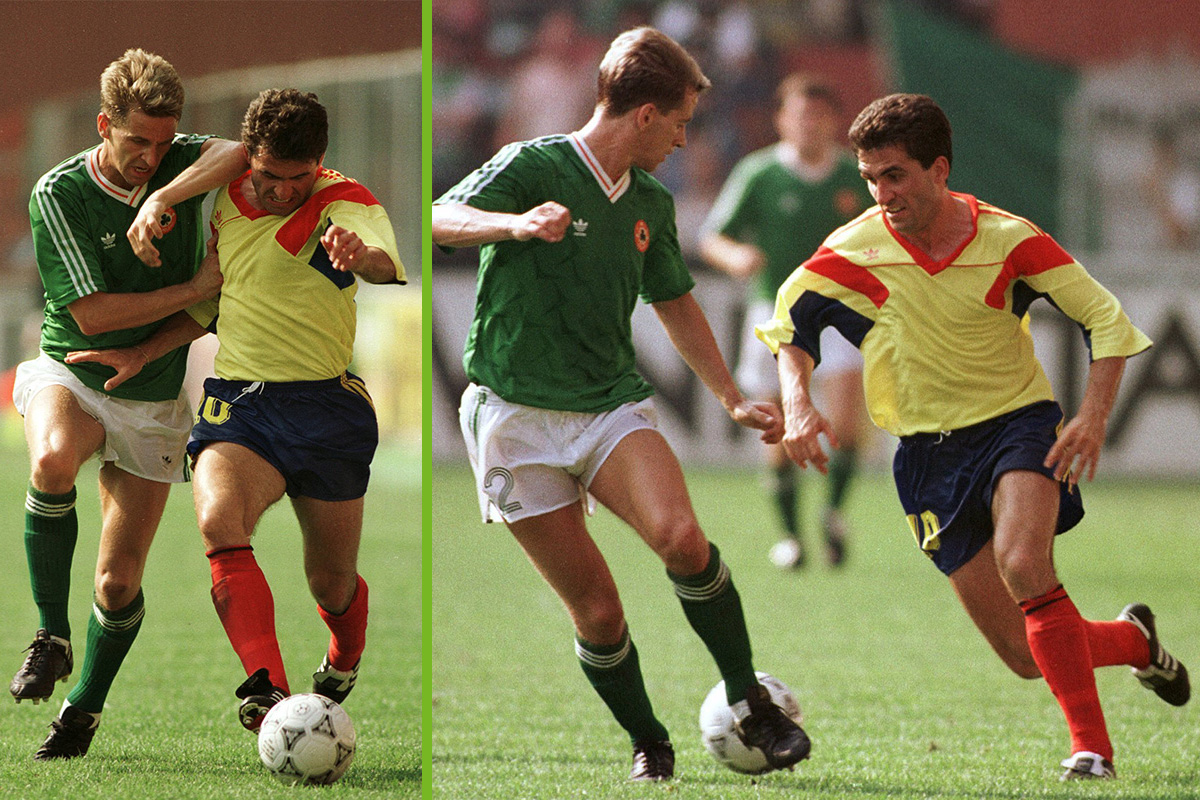 Now 25, Hagi had no shortage of suitors after the World Cup, but Real Madrid eventually won the race for his signature, breaking their transfer record to secure his services for 400 million pesetas (approximately €2.3 million in today's money). But a tumultuous two-year spell ensued for the little genius, with Los Merengues in a period of transition after winning the last five La Liga championships before his arrival.

The club's unsatisfactory situation was illustrated by the fact Madrid went through three managers in his first season in Spain: John Toshack, Alfredo Di Stefano and Radomir Antic all taking up the hot seat.

Under Antic and then Leo Beenhakker in his second season, Hagi was much better, making a far greater impact – scoring 12 goals. But his struggles to fully settle and integrate into the squad, in combination with Los Blancos losing the title on the last day of the season, saw him keen to move on with two years remaining on his contract. “It’s hard to lose like that, but it made me understand that my destiny was not with Real,” he explained, adding bluntly, “I failed. Faced with all those superstars, I nearly shat my pants!”

It must be said that Hagi's attitude towards his Madrid team-mates probably didn't serve him overly well either during his time in the capital. “In the old days, we desperately wanted to beat these kind of players, because we were jealous of them,” recalled Hagi prior to joining Madrid.

“The way they stood there so casually in their new boots and modern football strips while we were wearing old bibs and worn-out slippers.”

Brescia surprisingly became his next destination, offering Hagi the lifeline he needed to rekindle his career. And he took his opportunity with the little Serie A side. With fellow Romanian, Mircea Lucescu, being the manager, this was undoubtedly a crucial deciding factor in his decision to move to Italy. Lucescu, who has now gone on to become a coaching legend, wanted to create a ‘Little Romania' at Brescia, and also bought in Florin Raducioiu and Ioan Sabau to facilitate his plan.

While Hagi did produce some moments of utter magic in his first season, his questionable attitude also reared its ugly head on many occasions. Getting sent off on his debut was a prime example of this. The Lombardians just couldn't find any consistency in their performances, much like Hagi, and they ended up suffering the indignity of relegation.

Despite this setback, Hagi chose to stay and vowed to help his team regain their Serie A status to show he was no coward. Playing a vital role in Brescia achieving an immediate return to the top-flight, courtesy of their third-place finish in Serie B, saw Hagi was vindicated for sticking with the Little Swallows. Importantly, Hagi put in some much better shifts on his way to scoring nine goals and setting up countless others.

However, his second campaign at the club certainly did attract more controversy. After coming back late from international duty he was dropped by Lucescu, while other disappointing acts like refusing to do scheduled interviews gave his club further sources of frustration. Hagi's contentious behaviour led Lucescu to state: “He is a great player without a work ethic.

Having been one of the stars of the 1994 World Cup – where Romania reached the quarter-finals – the mercurial talent then earned himself a move back to Spain. 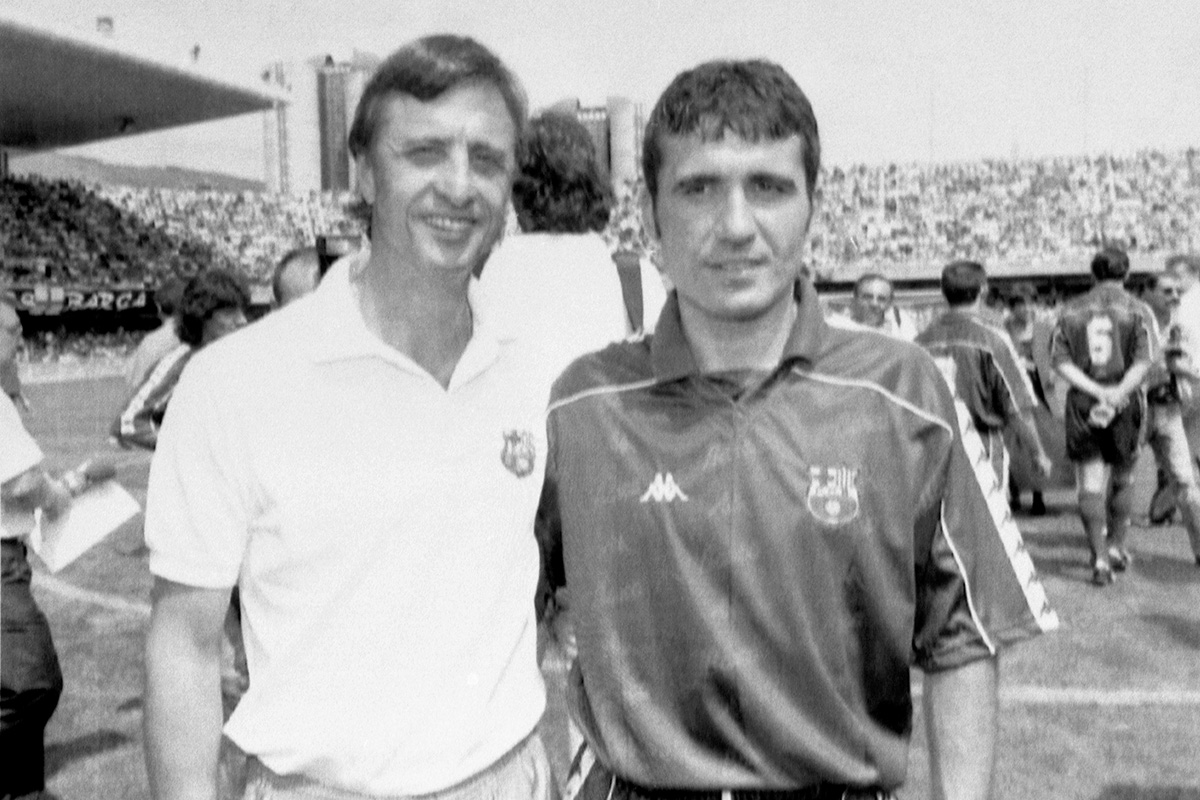 This time it was the other giant of Spanish football, Barcelona, who paid £2 million for the now 29-year-old playmaker. Linking up with the likes of Romario and Hristo Stoichkov, fellow stars of USA 94, the Barca side was supposed to be a match made in heaven for Hagi.

However, he failed to reproduce his sublime World Cup form, bagging just seven goals in his 36 appearances for the Catalans – succumbing to infuriating injuries did not help his cause either.

His next move, though, worked out wonderfully well, as he enjoyed huge success at Galatasaray. During his time with the Lions, he was a driving force within the side that won a remarkable four consecutive league titles, took home the 1999/2000 UEFA Cup and defeated his old team Real Madrid in the 2000 UEFA Super Cup. Getting himself sent off in that triumphant UEFA Cup final against Arsenal for punching Tony Adams was, indeed, unadvisable but classic Hagi.

Propelling Gala to such great heights ensured his legendary status at the club will remain forever. Former French international, Luis Fernandez, said it best when he mused, “Hagi is like wine, the older he gets, the better he is.”

The adoring fans' chant of ‘I Love You Hagi' beautifully sums up their immense adulation for their star. After enjoying some of the best days of his career in the Turkish capital, and having notched up a sensational 59 goals in 132 appearances, Hagi announced his retirement from football in 2001.

A much storied career at club level was fascinating enough but his most resonating performances unequivocally came when representing his beloved national team. Since debuting in 1983, Hagi went on to amass 125 caps for Romania and net an impressive 35 goals.

Hi ingenuity and overall brilliance in propelling Romania's golden generation to that quarter-final shoot-out loss to Sweden in 94 – for the record, Hagi scored his spot kick – is widely recognised as one of the finest individual efforts seen at any World Cup.

“We’re talking about the biggest win in the history of Romanian football.” 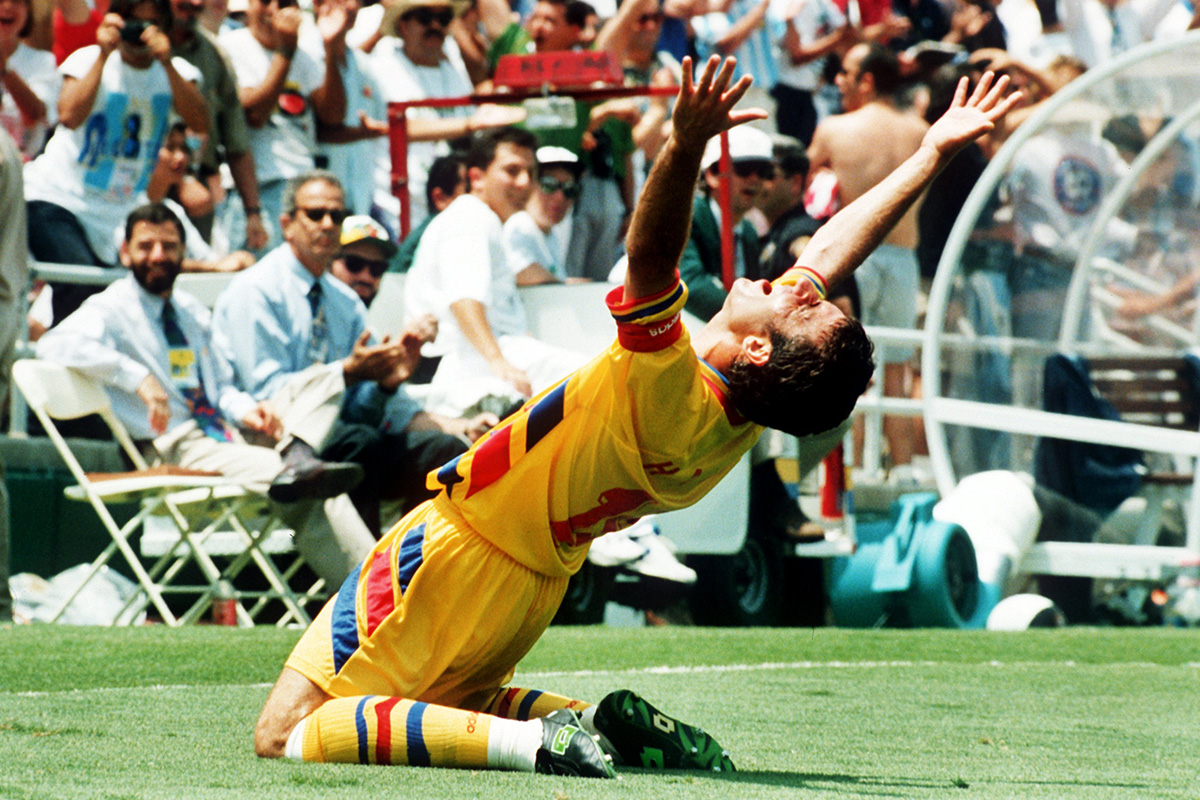 In the summer showpiece he was nigh on unstoppable, with his bamboozling dribbling ability, slick finishing powers and exquisite passing skills wreaking havoc. He also put his herculean strength in possession to great use, as his splendid form guaranteed his selection into the team of the tournament.

Giving his country 17 years of quality service cemented his legacy as Romania's finest ever player. When asked on the public's adoration of him, his response was a reserved one that demonstrated his discomfort about his legendary standing.

“I love everyone. And more important than love, I respect everyone. As for them to me, you’ll have to ask them. But at least I know my wife loves me, that’s enough for me.”

Even though the eight-time Romanian footballer of the year had his flaws, his mastery on the pitch is rightly what is be best remembered for. And for that, his legacy as one of the most unique, extraordinarily gifted characters is forever safe within the game's rich tapestry.