Willem Geubbels is enjoying an excellent year. Turning 16 years old in August, he has gone from playing for France’s Under-17s to the Under-18 side and made his Lyon debut against Dijon at the end of September.

Now, according to reports in France via RMC Sport, he has been offered a contract by both Manchester City and Bayern Munich as his star continues to rise.

Born in 2001, coming on in the 84th minute for OL, he became the first player born in the 21st century to appear in Ligue 1. Amazing to think the next potential superstar to come out of the Lyon academy wasn’t even conceived when France won the World Cup in 1998 and Euro 2000.

Who is Willem Geubbels?

Born just west of OL’s new Parc OL stadium, he is another player to follow in the footsteps of others who made their name for Les Gones.

Starting in the youth ranks of ASVEL Lyon-Villeurbanne, as a nine-year-old he was signed in the hope he’d follow the route of Nabil Fekir and Houssem Aouar into the first-team.

This season, the young teenager made the jump to Lyon’s second team, who play in Championnat National 2, France’s fourth division.

In just eight appearances, six from the start, he has scored five goals this season. His form has led to Bruno Genesio including him in the first-team training sessions and handed him his top flight debut against Dijon.

It has long been thought his appearance in the senior squad wouldn’t be far away after some stellar displays in the France youth set-up.

His incredible rise has not gone unnoticed and scouts from England and Germany have been to watch the the youngster.

Without a professional contract due to his age, RMC Sport reported that Manchester City and Bayern Munich have made significant offers to the forward in order to tempt him to leave his boyhood club.

“We’re talking to his mum and dad, because he’s a minor, but we’re also trying to get Willem and his manager to talk, which we do regularly, to see how he can integrate the team quickly.”

Aulas is hoping that the 16-year-old can see the other young players who have progressed at the club and that it would be enough to convince him to stay in France.

“Training wise, he’s already with the first-team, but also to see if we can give him the possibility of featuring in a certain number of games.”

What are Geubbels strengths?

Although still very young, Geubbels is tall, with long legs and stands out from the crowd, even amongst players three years older than him.

He has deceptive speed for someone his size and his aerial strength makes him a weapon along the ground and in the air.

When not in possession, he works hard to close down defenders, pressing the ball and trying to win it back.

For both France and the Lyon youth teams, he has shown two different sides to his game.

When leading the line, he constantly attempts to make runs across the centre-backs, looking to latch on to through balls.

He had a great sense of when and how to make these runs, breaking the line of last defender and charging through on goal to find himself one-on-one.

Geubbels is able to finish with both feet and has shown to be calm under-pressure.

Not just a one-trick pony, regardless of what team he has played for, he also attempts to drop deep into the midfield, linking up play, then using his pace and ability to gallop up the field and getting in behind.

He’s demonstrated a strong upper-body, able to hold off defenders, long enough to lay it off and start a move.

What are Geubbels weaknesses? 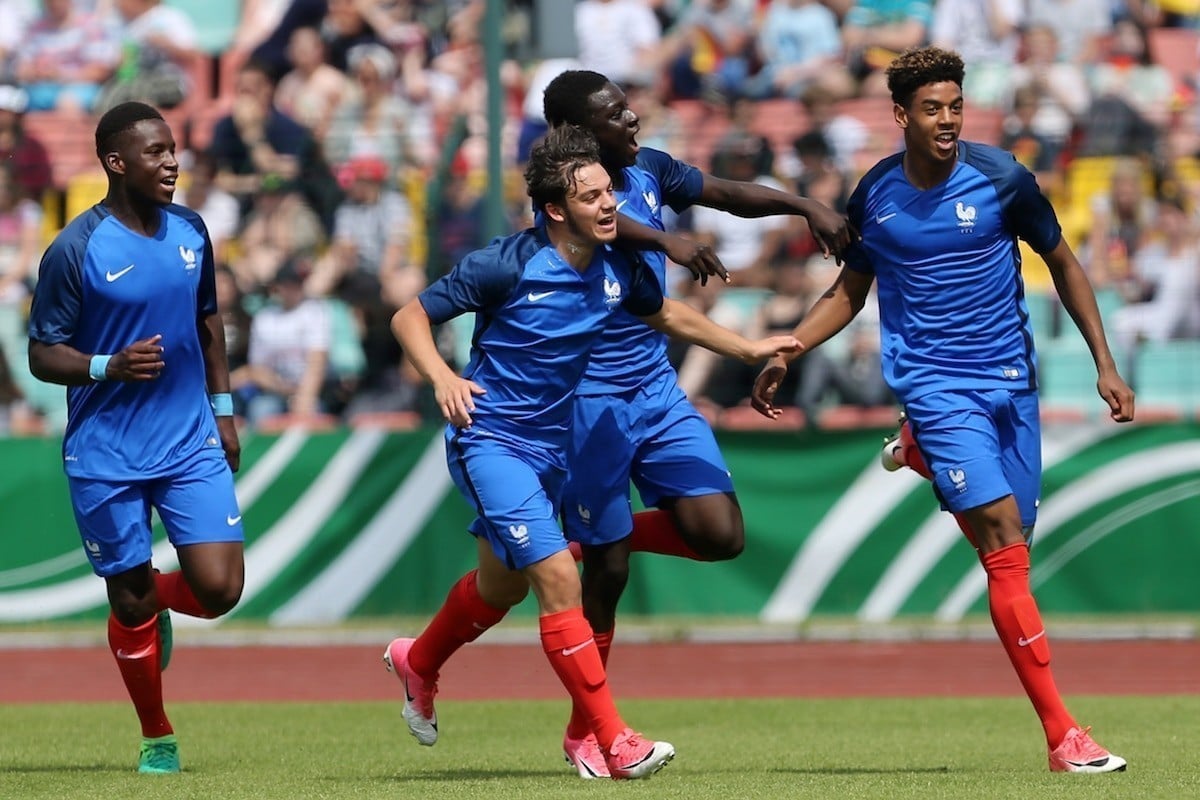 With someone so young, you need to be careful as to criticising elements of his game. He’s exciting and confident. Sometimes his touch is off, or he picks the wrong option, but that’s to be expected.

Consistency will come with time and experience and eventually that will come once he gains more minutes in the Lyon first-team.

When playing at youth level, even in his debut for France’s Under-18s against Poland, he is head and shoulders above the others on the pitch – scoring after just nine minutes.

He did enough to make the squad that played in the Under-18 World Cup in India, and played as a willing back-up to 17-year-old Lyon team-mate Amine Gouiri.

What does the future hold for Geubbels?

Without a professional contract, Geubbels is free to leave Lyon if he wishes, although compensation would need to be paid.

What falls in OL’s favour is the fact he has already made his debut in Ligue 1. At both City and Bayern, he is unlikely to feature that high up in either side and would start in the youth set-up.

Geubbels only needs to look at the progression of Alexandre Lacazette, Fekir, Aouar and others, to know that young players get their chance at Parc OL.

The club are famed with bringing through youth players, if you are good enough you are given a chance. Aulas knows that, Geubbels knows that and it could be the factor which keeps him at the club.

It obvious why both sides are so interested, the 16-year-old is mature beyond his years, shows that both on the pitch and with his physicallity against players older than him.

Geubbels has a huge future ahead of him, in the short-term, it will likely be at Lyon, but with the top clubs already intrigued, the long-term is still up for debate.