Certainly one of the more interesting matchups in the second round of European Championship for women is the duel between Germany and Spain. With that in mind, we did a preview of this match scheduled for Tuesday, July 12th, along with some free betting tips.

Our best betting predictions for Germany vs Spain Women

If you need some help to decide what is the right bet for Germany vs Spain Women, check our top betting tips for this game:

Germany and Spain Women to Draw

This is a duel of two great teams, both of which have started the group stages of Euro 2022 with convincing wins. So, we expect a very close duel, as was the case in the three most recent meetings between Germany and Spain.

In fact, two of those three duels have ended without a winner and we can see this match ending in a draw as well, especially since that result would suit both teams ahead of the last round.

All three previous h2h duels between Germany and Spain have gone under 2.5 total goals, so we wouldn't be surprised at all if that's the case on Tuesday as well.

That being said, both teams have gone over 3.5 total goals in their first matches in the competition, but we don't expect to see a lot of goals when they meet each other.

The best odds, stats, and more for Germany vs Spain Women

If you want to place a bet on the top Germany vs Spain Women odds, check our selection of odds from the main UK bookies:

This should be a very interesting game, so let's check both teams out in more detail:

The most successful European team of all time when it comes to women's football startes the Euro 2022 in good form, with a 4-0 win over Denmark, the last Euro's finalists. So, their fans can certainly hope for another impressive run by their team, but the next opponent on their way is Spain, another very good team.

After a win in the first round over Finland 4-1, Spain can rightfully hope to make it to the next round. Although their chances of going all the way are probably not that great as they would've been if Alexia Putellas is not out with injury, they are still one of the better teams in the competition. 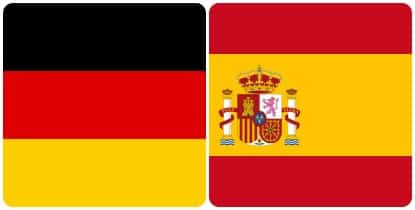