Germany are going to want a good performance and a result to match from their final warm-up game ahead of facing France in their opening group game of the European Championship. Latvia won't be at the Euros but are involved in the Baltic Cup and may decide to rest some key players following their clash with Lithuania on Friday.

Read on for our full match preview and prediction for Germany vs Latvia.

Germany to Win Both Halves, to Score Over 2.5 Goals and to keep a clean sheet

We've had to go with some more creative markets for this game just so we could bring you the decent odds you expect from our tips. So, in this prediction, we are backing Germany to win both halves and to score over 2.5 goals during the 90-minutes, as well as keeping a clean

Two of Latvia's last four international matches have produced over 4.5 goals, a 3-3 draw with Turkey and a 5-0 win over Andorra. Germany might not have been involved in many high-scoring games of late but the quality they possess in the attacking areas suggests that they are more than capable of scoring a bag full of goals on Monday. Werner, Gnabry, Kroos and Muller have all scored at least 15 international goals each, while Gundogan has 10 to his name and has enjoyed his most fruitful season in front of goal with Man City.

Germany have kept two clean sheets in their last four outings and are expected to dominate Monday's game. The hosts need a good result to build up some momentum ahead of the Euros and if Latvia play a weakened side due to their Baltic Cup commitments, then Germany will be in with a great chance of thrashing their guests. The goalscoring talent within this German side means they will be a threat at the Euros and a big win on Monday could send out a warning to the other favourites for the competition.

All you need to know ahead of Germany vs Latvia

Germany played out a 1-1 draw with Denmark on Wednesday, taking the lead in the 48th-minute through Neuhaus but conceding a Poulsen equaliser 19-minutes from time. The hosts played a strong starting eleven for that game and didn't make any changes until the hour mark but once they did, it allowed Denmark back into the game.  Timo Werner will be itching to get back into the goals ahead of the Euros and the Chelsea forward is expected to start on Monday.

Latvia drew 3-3 with Turkey back in March and have a game against Lithuania in the Baltic Cup to play on Friday before they can turn their attention to Germany. The visitors have called up a mixed squad in terms of youth and experience, with their most capped goalkeeper only featuring five times for his country to date. Maksimenko, Dubra and Tarasovs are all aged 30 or above and each have 30+ caps to their name, while in midfield, Zjuzins has the most experience with 44 caps and 7 goals for Latvia. The visitors lack a natural goalscorer up-front, or at least one that is yet to make a decent goals return at this level of football.

Germany vs Latvia – Your Questions 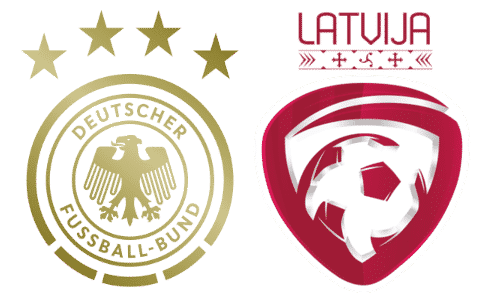