International friendlies, who needs them? Well, based on current form Germany do. It won't be easy against a very strong Denmark side though. Can the Germans find some form before the Euros? Find out with our Germany vs Denmark match preview with free tips, predictions and odds mentioned along the way.

The first of our predictions might be pushing things a little with Germany the favourites to win this match but there is plenty of evidence to suggest that Denmark will avoid defeat here. Germany have lost two of their last five including a shock victory to North Macedonia last time out. Denmark, however, are in cracking form ahead of the Euros; they've lost one of their last 10 – against Belgium – winning eight and drawing one. Germany don't have the best record against Denmark either; they've only won once in the last five meetings.

Let's deal with the elephant in the room first shall we? Denmark have a very sound defensive record, which has seen them keep eight clean sheets in 10. The thing is, they're not facing teams of Germany's quality every game and the Germans have failed to score just once in 24 matches. Denmark aren't shy of finding the net either with 28 goals scored across their last 10 matches. The last three head to heads have included goals from both teams too.

A fair few goals to go in

If there is one thing you can say about both Germany and Denmark of late it's that their games have seen plenty of goals. Germany's last five matches show an average of 3.6 goals per match with four of the five games going over 2.5. Denmark have also broken the 2.5 mark in four out of five but their match average stands at a rather staggering 4.6 goals per match. Three of their last five head to heads have seen at least three goals as well so everything points at this prediction being decent value.

Germany vs Denmark: Where to find the best odds

A good warm up ahead of the Euros

Germany might have won seven of their eight Euro qualifying games but that was a while back now. Heading into the tournament their form is questionable and with Joachim Low leaving his role after the tournament you wonder if he can turn things around. Denmark meanwhile will be buzzing as they sit top of their World Cup qualifying group and find themselves in a Euro group they could quite feasibly progress from. Germany will need to be on top form to turn this Denmark side over. 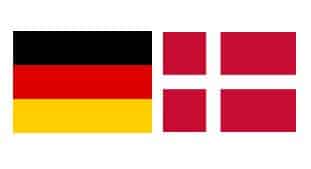