The striker can become a hero in an instant or a villain in a heartbeat and more often than not is the player we all dream of being when we are having a kick about in the street, park or for our local sides. Whether it’s the foraging “number 9,” whose job is to pounce on any potential opportunity that comes his way, thriving on any chance they can capitalise on, or maybe the more creative “10,” who is seen as the conductor or the hard-working provider for the front line – we all have our favourites both now and in the past.

Geoff Hurst’s love of football once cost him dearly in a financial sense. As a teenager living in Chelmsford, where he had lived since the age of six when he and his family left Lancashire, he would kick a ball relentlessly around his house. But a misplaced strike into his neighbours’ garden saw him fined £1 for disturbing the peace.

Soon, however, he would get the chance to showcase his skills as a professional. Having joined West Ham at the age of 15, he would go on to establish himself as one of the finest strikers in his country’s footballing history.

A frequent goal scorer at club level, Hurst would also make a huge contribution on the international stage, helping England to their only major tournament win. His legacy would ultimately lead to his being awarded a knighthood.

Hurst started out as a midfielder before being converted into a striker by Ron Greenwood, his manager at West Ham, in 1962. The change of scenery worked well; in his first season up front, Hurst scored 15 goals in 29 appearances.

His start in a deeper role perhaps gave him the wider understanding of the game necessary to be able to play the target man role so effectively. Indeed, when asked to discuss the striker’s best attributes, Greenwood wouldn’t focus on Hurst’s finishing, but on his all-round game, saying that, “The strength of his running and his ability to drag defenders out of position are phenomenal.”

Hurst’s movement, hold-up play and selfless ability to create space for others meant he was far more than just a prolific goal scorer, but one of the first genuinely great all-round strikers England had ever produced.

In his second campaign as a striker, Hurst helped West Ham to their first ever FA Cup victory, scoring the second goal in a 3-2 final win over Preston North End. The following season he played a pivotal role in firing the club to success in the European Cup Winners’ Cup.

1965-66 was his most prolific, however, as he found the net 40 times in 59 games across all competitions. And, on the back of that form, he was included in the national team squad for the 1966 World Cup, which would take place in England.

Hurst had made his international debut in February of that year, ironically against West Germany, who he would go on to haunt in the World Cup final. But, after some unimpressive displays in friendlies, he was left out of Alf Ramsey’s starting lineup for the competition with Jimmy Greaves and Roger Hunt getting the nod ahead of him.

A headed winning goal against Argentina in the quarter-finals meant that, with Greaves out for the semi-final with Portugal, Hurst was entrusted with a starting spot. He repaid Ramsey’s faith, setting up one of Bobby Charlton’s two goals as England marched on to the final. 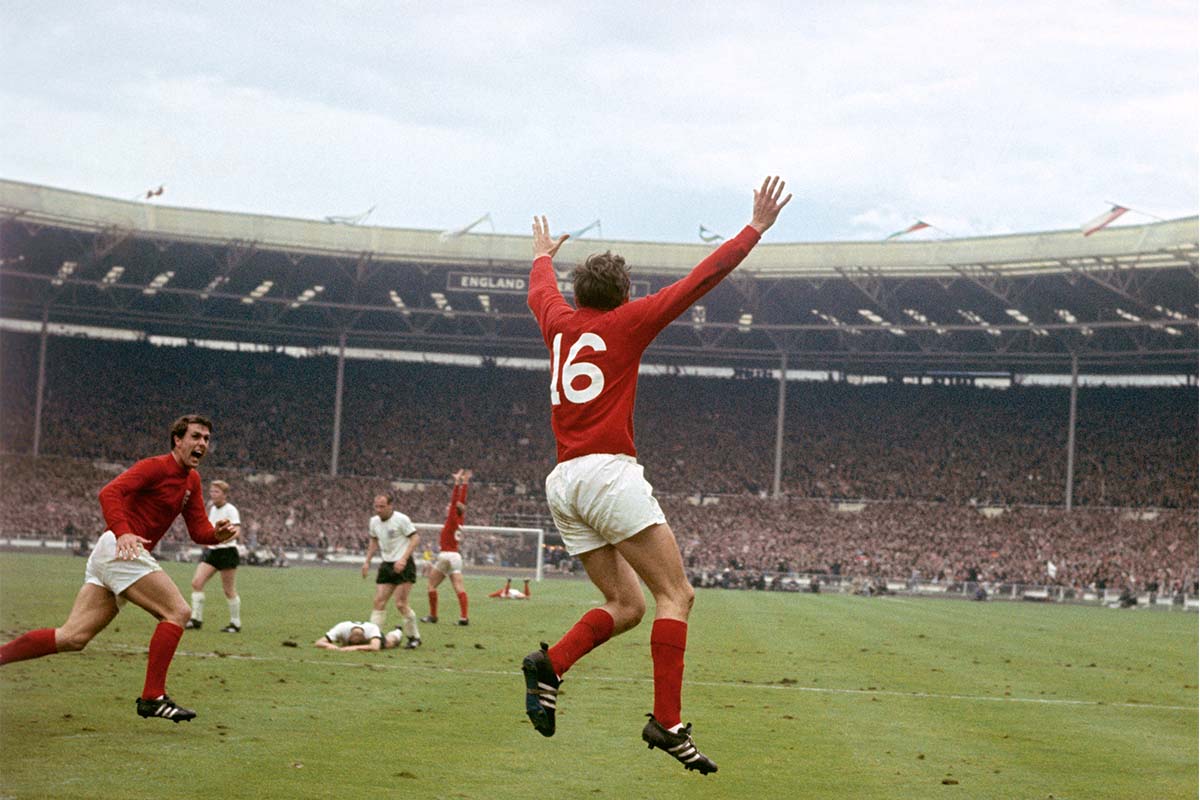 Retaining his place for the clash with West Germany, Hurst went on to become the only player in history to score a hat-trick in a World Cup final. He gave England the lead with an early header before scoring a highly controversial goal in the first half of extra-time following a 2-2 draw. He then thrashed home a fourth to seal the win, and England had won the World Cup.

That was undoubtedly the peak of Hurst’s career, as it was for many of his team-mates. He was included in the official 1968 European Championship team of the tournament and went on to score over 240 goals for West Ham before leaving for Stoke in 1972.

For sheer importance it’s hard to overlook Hurst’s third goal in the 1966 World Cup final as his best. Technically, it wasn’t his finest work; the ball hit a divot, teeing him up perfectly to lash it into the back of the net, but it could not have been more timely, or historic.

England had never won a major international competition before and haven’t done so since, which makes his third strike against West Germany on 30 July 1966 all the more momentous. And aesthetically, the sight of the ball careening off his left foot following a direct counter-attack at a time when England were under pressure was beautiful for home fans. It opened a valve of pent-up emotion and reaffirmed the country’s place atop the footballing hierarchy after years of uncertainty.

At a time when the English striker was built purely in a clinical touch and relentless zeal for scoring goals, Hurst brought a new dimension to the game. His team-centred approach and ability to involve himself in different areas of the pitch made him a real attacking outlet as opposed to being a player who relied upon the chances created by team-mates.

His goals in the 1966 World Cup final were perhaps both a gift and a curse, in that they overshadowed what was otherwise a strong career.

He remained loyal to West Ham, only leaving the club at the age of 30 for Stoke. He cited his love for the style of football implemented by Greenwood as the primary reason for his staying with the Hammers for so long. “When you're playing for a team that can score seven one day and four the next it's really quite good fun,” he once commented. “When job satisfaction is that high, why would you want to play for anyone else?”