Genoa and Sassuolo go head-to-head in Serie A this weekend and following slow starts to the campaign, both teams will view this match as a great opportunity to get another 3pts on the board.

Here are our predictions for Genoa vs Sassuolo.

We can't see either side keeping a clean sheet this weekend due to their recent head-to-head record and their performances in Serie A of late. Both teams have scored in five of the last six encounters between Geona and Sassuolo in Serie A, while four of the host's and three of the visitor's last five outings in the league have also produced goals at both ends of the pitch.

Sassuolo have won their last three games against Sunday's hosts, including a 2-1 win at Genoa last season. Three of the pair's last four encounters have ended in 2-1 scorelines, as have three of Sassuolo's last five Serie A games. Genoa don't keep many clean sheets but they know how to find the back of the net, so it's tough to see Sassuolo keeping their hosts from scoring at least once on Sunday.

Everything you need to know about Genoa vs Sassuolo

Before the international break, Genoa became the first team to lose to newly-promoted Salernitana. A solitary strike in the 66th-minute from Duric proved enough for the home side to secure their first win since returning to the top-flight. That result marked a new low for Genoa this season and Sunday's hosts will have to put in a much better performance this weekend if they want to take anything from their clash with Sassuolo. Genoa currently sit 16th in the Serie A table having picked up 5pts from their opening 7 matches.

Sassuolo sit 2pts clear of Genoa as things stand but will be aiming to increase that gap on Sunday. Sassuolo played host to the Serie A champions Inter Milan last time out, losing the game by two goals to one. A Berardi penalty put Sassuolo 1-0 up at half-time but goals from Dzeko and Martinez in the second forty-five saw Inter Milan pinch all 3pts. Sassuolo gave a good account of themselves against Inter but won't be satisfied unless they claim a win this weekend.

Genoa: Maksimovic, Bani, Destro, Criscito, Vanheusden, Biraschi, Sturaro and Caicedo could all miss out due to injury.

Sassuolo: Berardi, Toljan, Obiang and Romagna are the main injury concerns for the visitors this weekend. 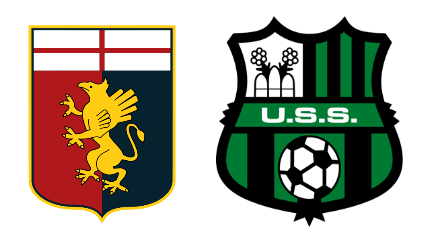