As Sporting Lisbon try to haul themselves out of the wreckage that has become their summer, a string of talented players are looking for a new club.

Siniša Mihajlović has been confirmed as the club's new manager but he will be without several established members of the first-team after nine players – at the time of writing – cancelled their contracts following a training ground attack by disgruntled fans.

A group of 50 fans attacked players and staff in May after the club failed to secure Champions League qualification.

It sparked a mass exodus, with top-scorer Bas Dost and goalkeeper Rui Patrício – who has just joined newly-promoted Wolves – among those departing.

Another player now unattached is Patrício's Portugal teammate Gelson Martins. The 23-year-old winger has emerged as an Everton, Liverpool and Arsenal transfer target in recent weeks and a Premier League move looks increasingly possible now that he is a free agent.

According to the Everton transfer target by the club's new sporting director Marcel Brands and recently-hired head coach Marco Silva.

Considering the status of the other clubs expressing interest, signing Gelson would represent a significant transfer coup for Everton.

Born in Cape Verde, Gelson moved to Portugal as a teenager and established himself as an emerging prospect in Benfica's youth academy before making the switch to Sporting.

There, he broke through as an exciting teenager in Sporting's B side during the 2014/15 campaign, scoring six times in 40 appearances. His eye-catching form did not go unnoticed, with Jorge Jesus promoting him to the first-team in the summer of 2015, following in the footsteps of Cristiano Ronaldo, Nani and Ricardo Quaresma in graduating from Sporting's renowned academy.

Several of Gelson's performances for Sporting B and Portugal's underage set-ups were at right-back. Although his enterprising runs down the flank set off pinging noises on the radars of scouts across Europe, there was a feeling that he was being misused in a primarily defensive position.

Fortunately, Gelson was afforded the opportunity to impress from an attacking base following an injury to André Carrillo. Gelson seized his opportunity, scoring seven goals and notching four assists in 42 appearances during the 2015/16 season.

The winger continued on an upward trajectory during the following term, matching his haul of seven goals but drastically improving his creative output with nine assists.

That season, Gelson emerged as one of Portuguese football's most exciting wide men, averaging 2.37 successful take-ons per 90 and 1.13 open play key passes. He proved a constant menace for Primeira Liga defences, averaging 5.39 touches in the opposition's penalty area.

Gelson's player persona radar, exclusive to Football Whispers, illustrates how devastating he could be during the 2016/17 season, with a heavy emphasis on dribbling, crossing and on-target shots.

His impressive development attracted interest from major European clubs. Jürgen Klopp, searching for a speedy, direct attacking player to join Sadio Mané and Roberto Firmino in the Liverpool frontline, tracked him closely before ultimately opting to pursue Mohamed Salah, a decision which proved a transfer masterstroke from the German.

Gelson stayed put in the Portuguese capital and continued to grow. During the 2017/18 season, he scored eight goals and produced eight assists, while improving to 2.71 successful take-ons per 90 and 1.34 open play key passes.

We've used our player comparison persona model to portray how Gelson's game has developed over the last two seasons. 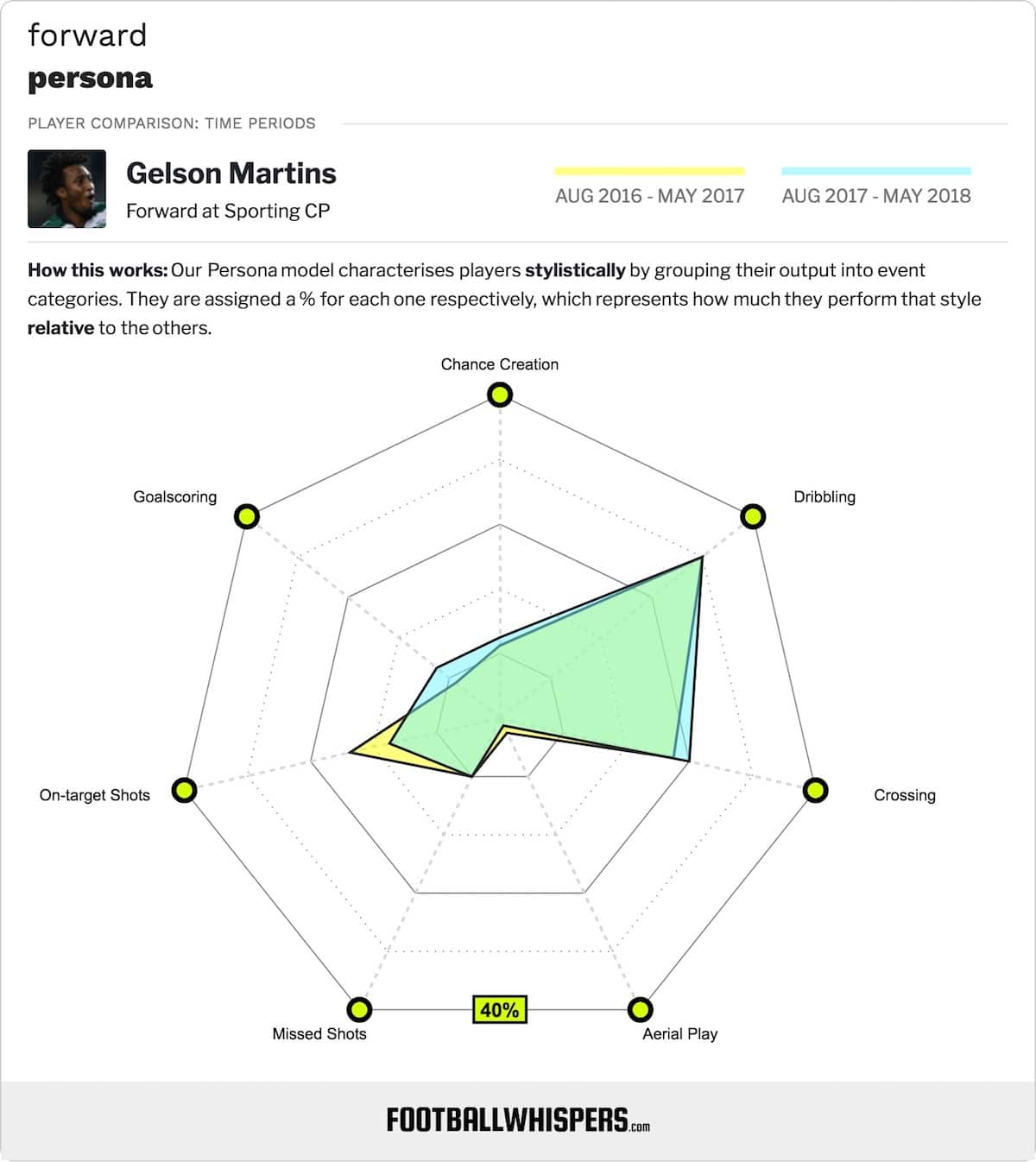 Should he move to Everton, Martins would inject some much-needed pace and urgency into their attacking line-up. The Toffees were heavily criticised for slow and ponderous attacking last season, with Gylfi Sigurðsson and Wayne Rooney doing little to set pulses racing inside Goodison Park.

Theo Walcott's capture in January was an attempt to remedy this but there is a feeling that the former Arsenal winger cannot be solely relied upon to provide quick-thinking in the final third. Yannick Bolasie's return following 11 months out with a ruptured cruciate ligament momentarily brought Everton supporters to the edge of their seats once again, but the Congolese winger has yet to prove his consistency.

Interestingly, Gelson's player persona is almost identical to Bolasie's while both players have a long way before they can match the goalscoring or chance creation of Liverpool forward Mané.

Gelson would certainly bring fresh ideas and impetus to the Merseyside club and, having played as both a right-winger and right-back, would suit Silva's preferred 4-3-3 or 4-2-3-1 systems, while he could be deployed as a wing-back if the coach decides to experiment with a three-man defence.

Having been scouted by Chelsea and Tottenham Hotspur, too, Gelson's performances in Europe suggest he is ready to make an impression in one of Europe's ‘Big Five' leagues. The winger registered two goals and two assists in the Champions League last season before going on to impress in the Europa League and being named in the competition's team of the season.

At 5ft 8in, Gelson does not offer in the aerial department but he is quick, dynamic and his star is on the rise. Several clubs will almost certainly be interested in him but, while a move to Arsenal or Liverpool may look more attractive on paper, ultimately his career is going to be helped with the promise of starting football.

Considering the array of attacking talent already on display at the Premier League's top clubs, Everton are in a stronger position when it comes to guaranteeing a prominent role.

With a bright yet uncertain future, Gelson will have no problem landing a club following his departure from Sporting. Currently on World Cup duty with Portugal, expect the race for his signature to heat up considerably after the tournament draws to a close.