Tipped to be the next big thing off the Benfica production line, Gedson Fernandes’ career has hit a roadblock.

The 20-year-old burst onto the scene last season and starred alongside João Félix as Bruno Lage’s new-look side impressed domestically and in Europe.

However, while Félix convinced Atlético Madrid to part with €126million to secure his services, the reports linking Fernandes with a big-money move to one of Europe’s elite dissipated as quickly as they emerged.

Once rumoured to be a Liverpool, Tottenham Hotspur and Chelsea transfer target, the Portugal international is now struggling to break into the Benfica starting XI after apparently falling out with Lage.

Reports last month claimed long-time admirers Manchester United were back in the mix for him but, according to Sky Sports News, West Ham are the shock leaders in the race to land the former wonderkid.

The Hammers are in talks with the Portuguese giants to take the 20-year-old on an initial 18-month loan and the deal would include an option to buy. David Moyes is said to want to reinforce his midfield after returning to the dugout and family reasons are believed to be the reason why the side placed 16th in the Premier League are believed to be Fernandes’ preferred destination.

While this has raised a few eyebrows, West Ham do have a bit of a track record when it comes to helping players get back on track. For starters, Dimitri Payet looked like a player reborn during his time in London. He left under a cloud but the fact is the Hammers made £15million on a player they owned for just 18 months.

It was a similar story with Marko Arnautović. The Austria international failed to settle anywhere throughout his career yet his two seasons with West Ham saw him produce consistently in back to back campaigns for the first time ever. He scored 26 times for Stoke City across four seasons but almost matched that in just two years at the London Stadium, departing for China having netted 22 goals.

Neither Arnautović nor Payet had long stints with the Hammers but their time with the Irons almost transformed their careers. Without it, who knows what would have happened to them?

Fernandes needs this move as much as West Ham need him. 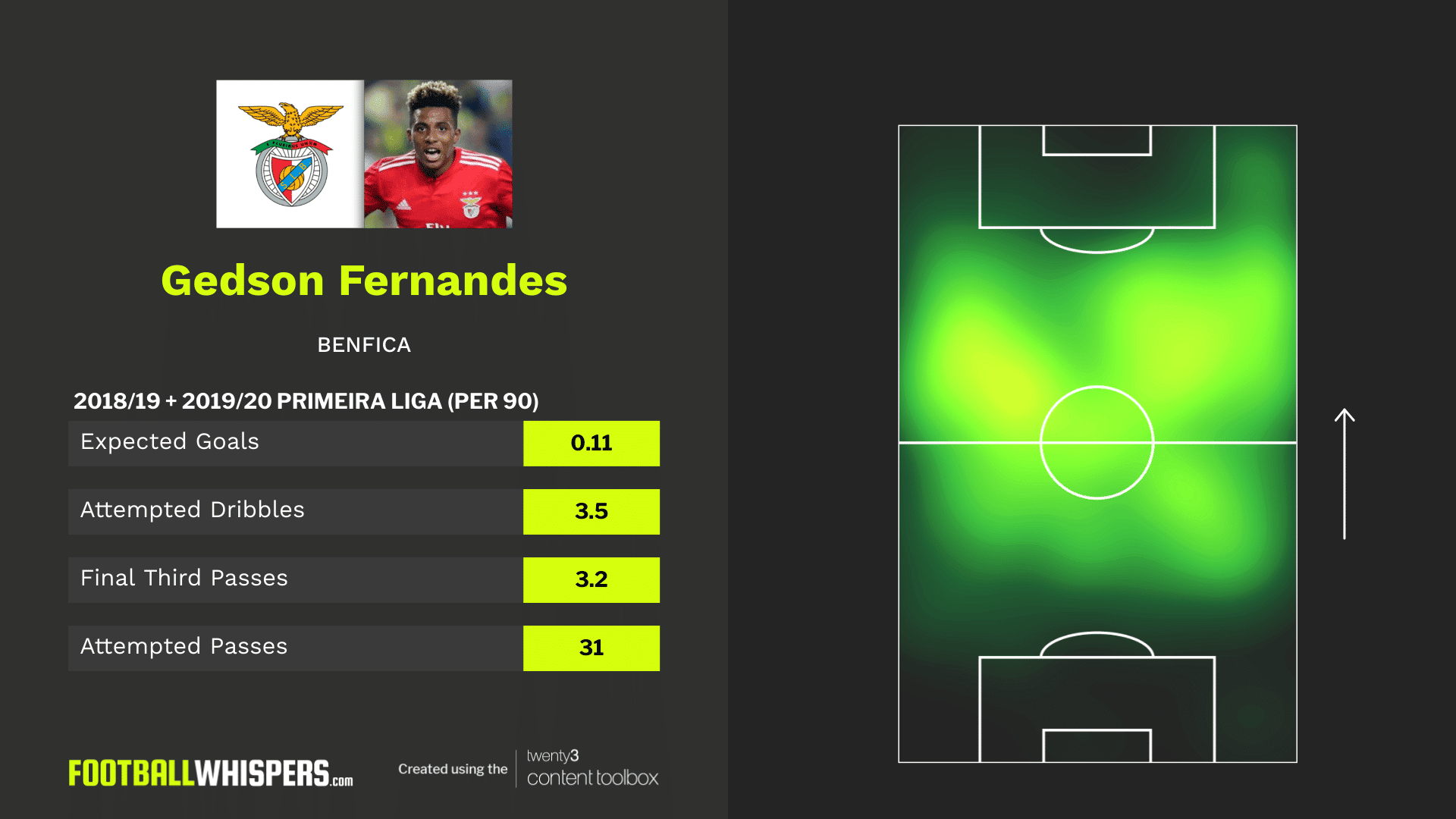 The potential is there but Fernandes' time in the Portuguese capital is up. Due to his limited involvement, the sample size for stats isn't the largest. But there are some highlights to take away from them.

An expected goals (xG) per 90 average of 0.11 is by no means exceptional. But it is something which can be worked on. The fact the versatile forward, as evidenced by his heat map above, is getting into semi-dangerous areas with some sort of regularity over the past 18 months is something to hold on to and it's definitely something Moyes can build on.

He's a competent and confident ball carrier, averaging 3.5 dribbles per 90. This is even more impressive when you consider these often come from central areas of the pitch. Fernandes takes opponents out of the game and creates space for others. He's playing 3.2 final-third passes and he finds a team-mate with 85 per cent of them – an added bonus.

He's not heavily involved, attempting just 31 passes, but there's a purpose to his game whenever he is in possession. On paper, he's the sort of player Premier League defenders hate coming up against. His career has stalled but if he's able to get it back on track he'll be a handful and an influential weapon for the Hammers to have within their arsenal.

A loan deal with an option to buy means it is a no-risk move for Moyes. His first signing as West Ham boss could turn out to be his best.