Premier League clubs regularly raid the Bundesliga to bolster their squads. The summer of 2019 looks set to be no different with Mainz midfielder Jean-Philippe Gbamin reportedly a target for four of the top eight.

According to the player's agent, Bernard Collignon, the centre-midfielder-cum-centre-back has attracted interest from Champions League finalists Liverpool and Tottenham Hotspur as well as Arsenal and Everton.

“He is on many shortlists,” Collignon said during an interview with Fussball Transfers. “However, not as a top candidate because his exact position is unclear. In my opinion, he is a player worth 60 million euros. It's time for him to play as a centre-back.”

The Bundesliga side didn't want to part ways with Gbamin while in the middle of a relegation battle and the Champions League winners eventually struck a deal with Monaco to sign Fabinho.

However, Collingnon revealed Klopp viewed the player as a centre-back who could do a job in midfield. With Fabinho the opposite of that and Dejan Lovren reportedly a target for AC Milan, the Reds could reignite that interest in the Ivory Coast international.

Gbamin's versatility makes him an attractive proposition. He's used primarily as a midfielder by Mainz but has filled in at centre-back on occasion.

Everton could do with a player of his style to cover for Idrissia Gueye and potentially play alongside André Gomes, while Arsenal and Spurs are in the market for defenders.

A fee in the region of €60million is steep and Mainz are unlikely to get that, even with four years remaining on his contract. But the interested parties won't be deterred by this valuation, especially given he's effectively filling two positions for the price of one. 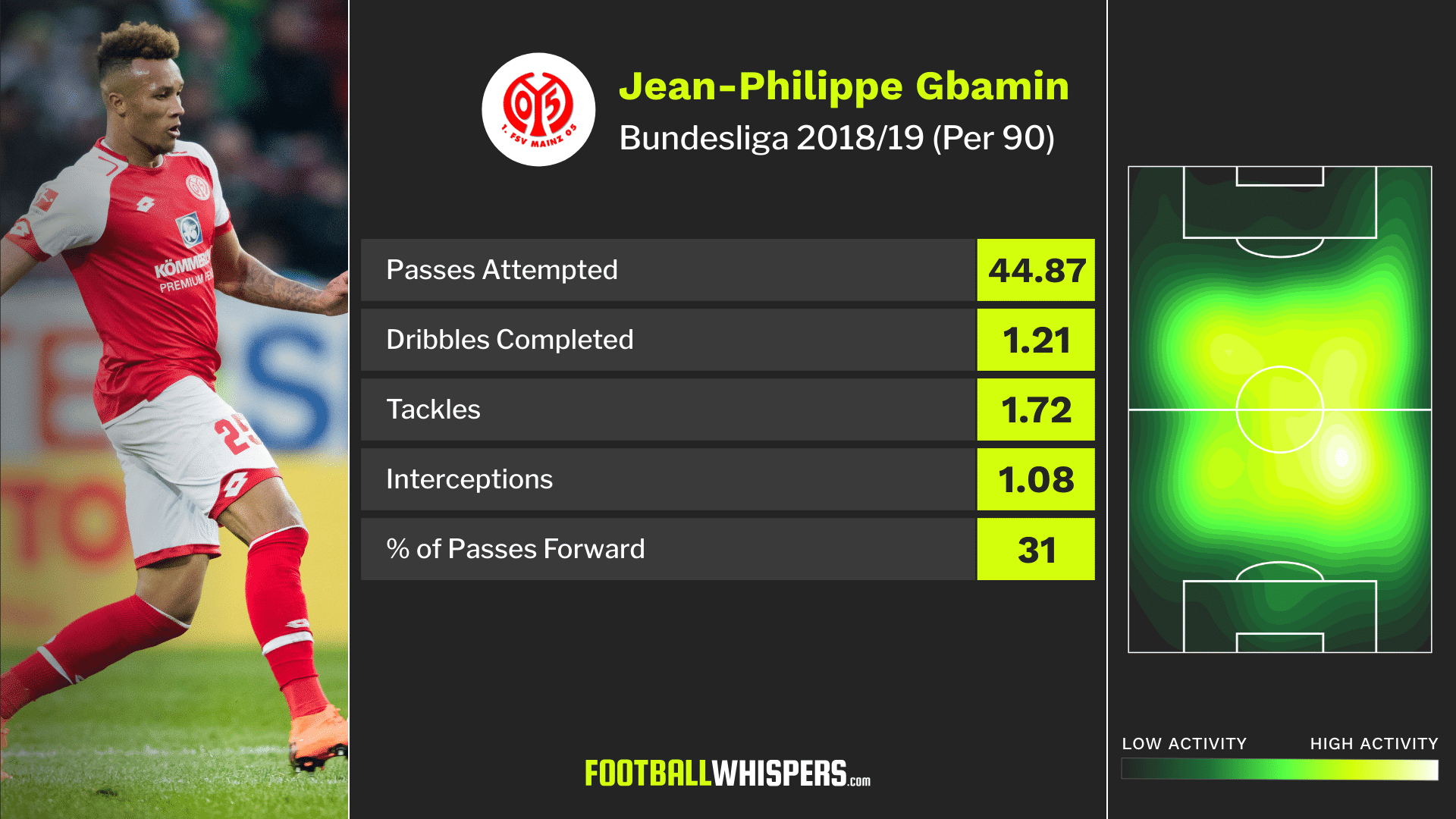 Gbamin exudes confidence in the middle third and the 6ft 1ins powerhouse appears to have all the traits required to excel in the Premier League as a midfielder.

He's composed in possession, averaging close to 45 passes on a per 90 minute basis. While that number wouldn't put him in the top ten in the English top flight, it is worth factoring in that he didn't play for one of the dominant sides in the Bundesliga.

He's press-resistant, too, a vital part of a midfielder's game these days. With so many teams looking to be more aggressive and pressing higher up the pitch, the ability to ride challenges and create space is a necessity. He completes 1.21 dribbles of the 2.25 he attempts.

Not only is he a progressive ball carrier but he's also just as incisive with his passes, playing 31 per cent of them forward.

He does the dirty work required when playing in the midfield, too. Last season, Gbamin averaged a combined 2.8 tackles and interceptions per 90 during the 2018/19 season. He also registered a remarkable four possession regains in the middle third and 3.76 in the defensive third, putting him in the top 15 in the Bundesliga for both stats.

But back to his influence in an attacking sense. Those linked with him all like to play passing football. They need players in their team who retain possession while acting as a metronome in the middle third. Gbamin does just that. 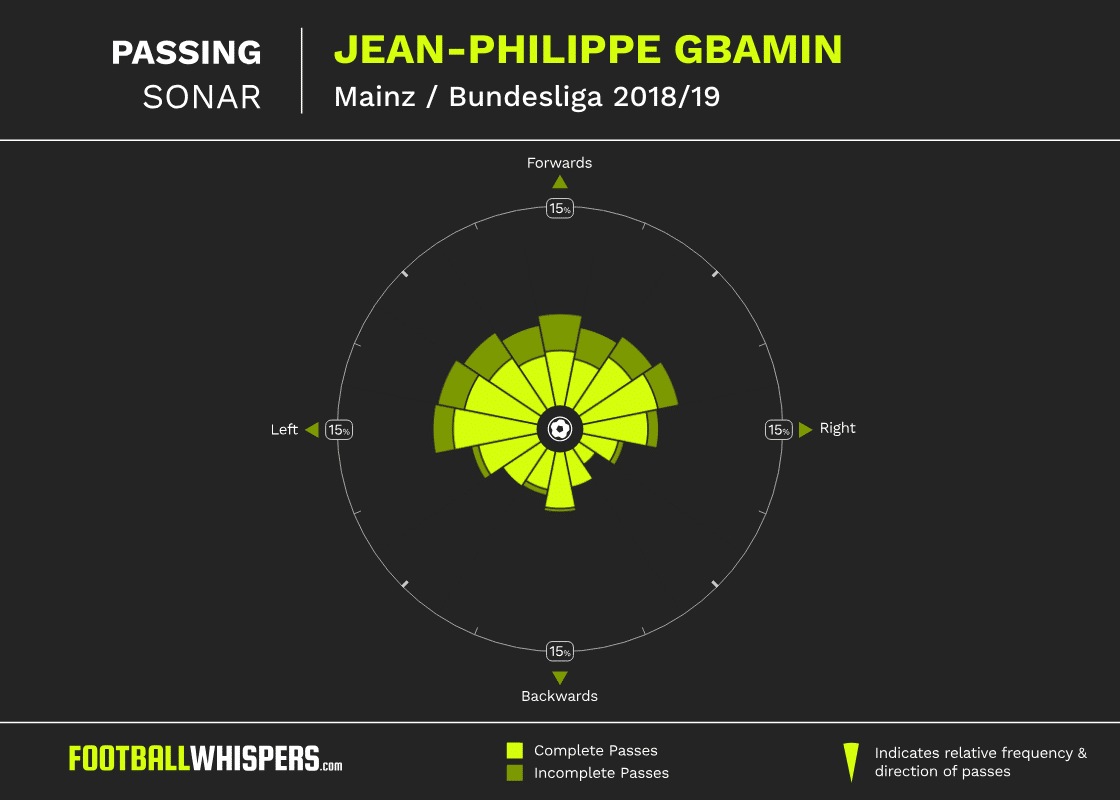 His passing sonar above shows just how well rounded he is in possession. Unlike certain midfielders, he doesn't favour a certain side of the pitch; there's a variety to his game.

All of these traits are transferable to a centre-back role, especially in a team that dominates possession. Having a ball-playing defender can be a game-changer as adds another dimension to the team going forward.

It's something the top teams have acknowledged. Not only are they after centre-backs who can pick a pass, but they also want players who can carry the ball and create space. Joe Gomez and Joël Matip made a huge difference doing it for Liverpool while Aymeric Laporte impressed doing the same for Manchester City. Harry Maguire regularly did just that for Leicester City and is on the verge of a move to the Etihad.

Gbamin could be a difference-maker in that sense. A midfielder in defence. A ball-player who can step up to give the team an advantage in a key area of the pitch.

He's someone who could be crafted into one of the best in his position and he's well worth a gamble in the current market.