For the club who gave the Premier League Jürgen Klopp it's been a season to forget. Mainz are in a relegation fight once more under Sandro Schwarz, but the form of Jean-Philipp Gbamin has been one of the few bright spots.

In their ninth consecutive Bundesliga season, Mainz have floundered under Klopp's former team-mate and find themselves in a battle to make that ten straight seasons with 27 points after 29 games.

However, one reason for optimism has been the emergence of Gbamin, a versatile 22-year-old defensive midfielder, signed for £4million in the summer of 2016 from Lens.

Who is Jean-Philippe Gbamin?

Gbamin was born in the Ivory Coast but received his football education in France, joining the Lens system that has produced defensive talents like Serge Aurier and Raphaël Varane.

Gbamin made it to the first team as a right-back in the 2013/14 team which won promotion to Ligue 1, but transitioned into a central defender the following season.

Unfortunately, the club ran into major financial trouble, had their promotion invalidated and were relegated in January 2015 regardless of their finishing position at the end of the season. Lens were forced sell off their excellent young players and Gbamin, who had by then been converted into a defensive midfielder, ended up swapping Ligue 2 for the Bundesliga.

After a rough 2016/17 debut season that saw him sent off three times in the league, Gbamin has shone this term, earning a contract extension until 2022 and catching the eye of teams from England, Italy and Spain.

Although that late November extension only added a single extra year to his existing deal, there are a couple important clauses worth noting. The contract is valid for the second division and includes no buyout clause, thus giving Mainz excellent bargaining position. 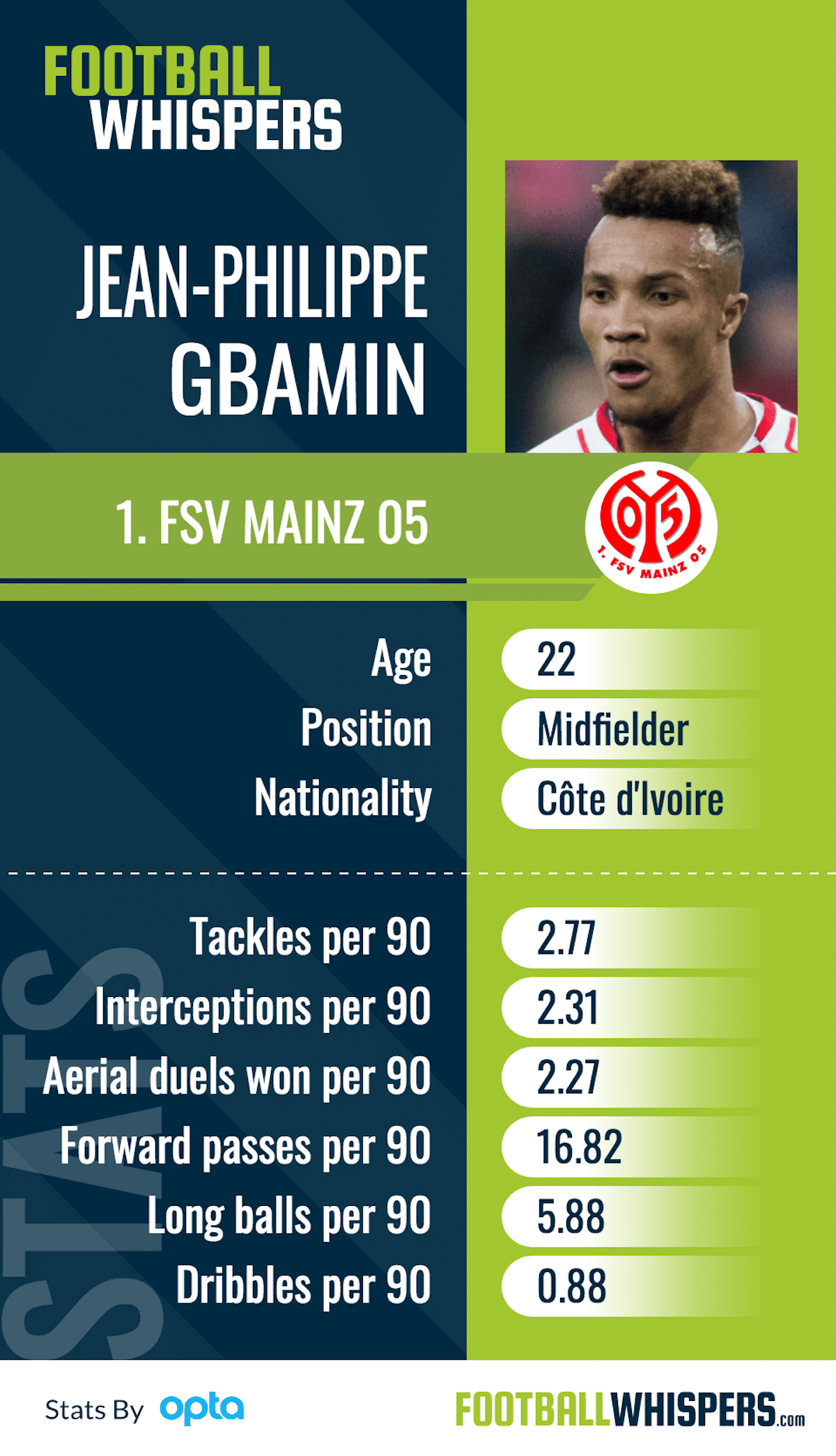 Shrewd business sense has long been a calling card for the ZeroFivers and it seems sporting director Rouven Schröder has learned a couple tricks from his predecessor Christian Heidel, who is considered the best sporting director of the past 15 years and is now turning Schalke around.

Mainz's recent history of making hefty net profits of close to €45million on Jhon Cordoba, Yunus Malli, Shinji Okazaki and Loris Karius is a good sign. By paying out an average yearly player wage of £600,000 – less than half what Huddersfield Town pay – it’s safe to assume Mainz are willing to listen to the right offer, which could be in the region of £20-25million.

That kind of money would likely rule out Schalke who, despite Heidel denying contact with the player, would have been favourites since former Mainz assistant coach Peter Perchtold is now helping Domenico Tedesco in Gelsenkirchen. That leaves Premier League teams, who are the preferred destination as per the player’s representation.

Gbamin’s main strength is his physicality, which allows him press opponents, chase down strikers and overpower most his midfield foes.

In the images below, Michael Gregoritsch, one of the breakout stars for Augsburg, has several yards on Gbamin. But he has no chance in a race against Gbamin, who was a track and field athlete (long jump) in his youth, and is soon caught. 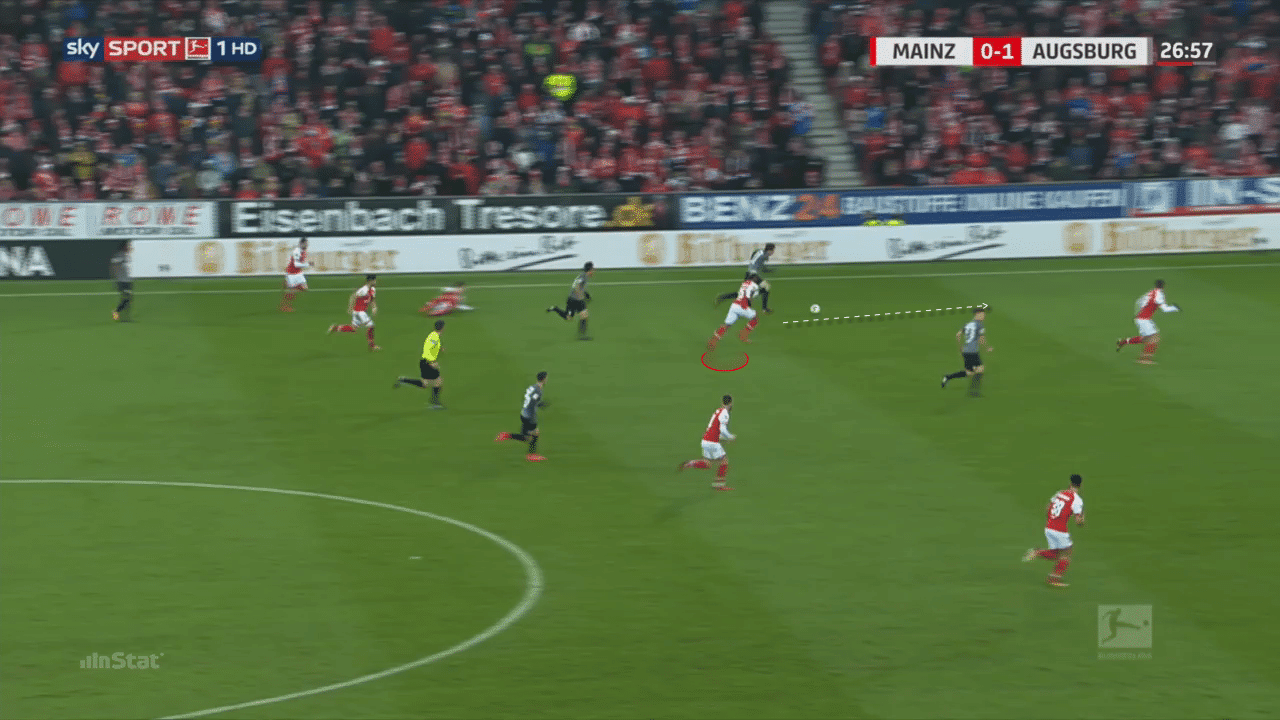 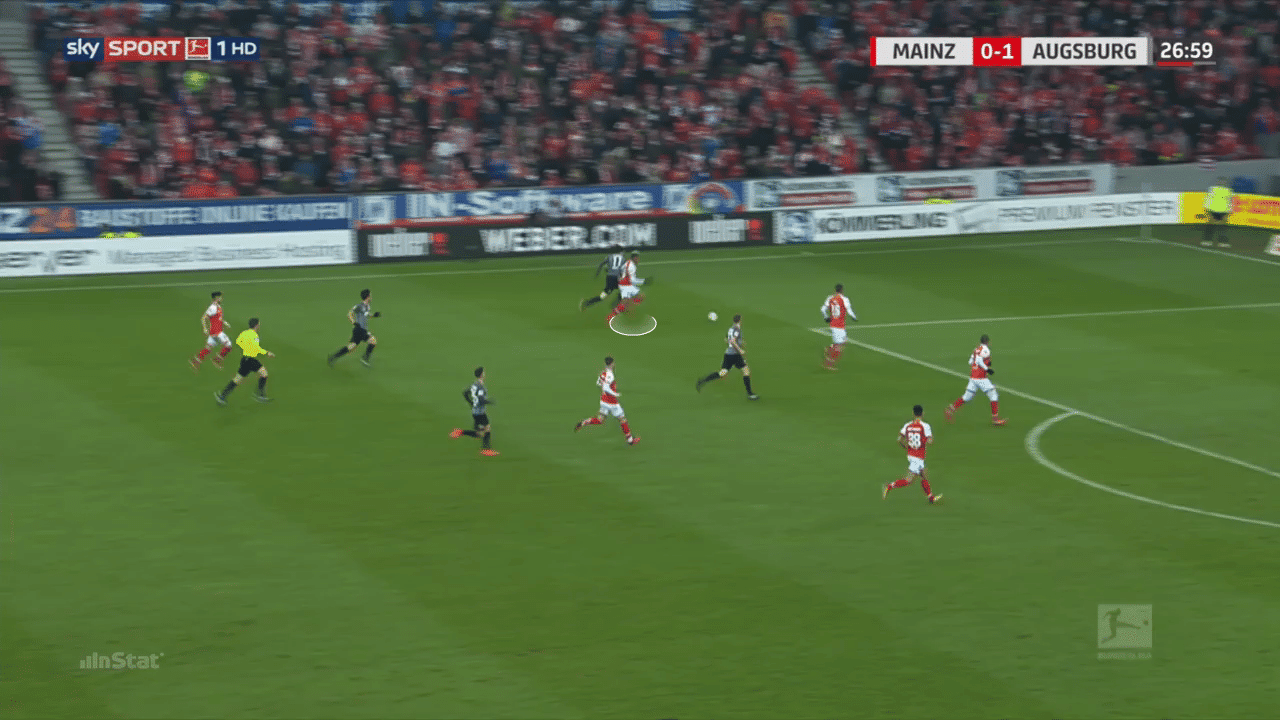 The Ivorian is in the top 97th percentile in total tackles and averages 2.8 per 90, which puts him in the top 82nd percentile in the Bundesliga. That number is even more impressive compared to his teammate Danny Latza, a tackling machine of a defensive midfielder who wins 46 per cent of almost six attempts per 90.

His anticipation and athleticism also allows Gbamin to step in for interceptions and his 2.32 per 90 rank him in the top 83rd percentile in the league, despite playing almost half his minutes in the centre of defence where it is harder to make interceptions.

Gbamin is also effective in the build-up, placing in the top 85th percentile in total passes, with a whopping 72 per cent going forward. His use in attack comes from the ability to play long balls with heavy volume – 137 in total is in the top 89th percentile – and 55 per cent success rate is well above average; closer to the elites like Mats Hummels and Jérôme Boateng (60 per cent).

Gbamin has also shown a willingness to progress the ball and take risks by dribbling out of tricky midfield situations, perhaps to emulate his idol Yaya Touré.

This can be effective in counter-attacking situations and when he has space. But Gbamin’s end product is sometimes lacking – seven open play key passes and a 0.29 xA (expected assists) total are proof of this.

Even if some of that is down Mainz’s  total non-penalty xG (expected goals) being the second lowest in the Bundesliga, that part of his game is clearly a work in progress. His tendency to try to dribble in dangerous central areas as the lone pivot can lead to costly turnovers and the data bears this out: getting dispossessed 27 times is in the top 87th percentile of all Bundesliga players.

Poor decision-making and a tendency to make rash challenges can occasionally detract from his performances, though they appear to arise out of frustration mostly.

He has improved on the three red cards he picked up in his maiden season and has also cut down on his fouls from a per game average of 2.1 to 1.3 this term. Concentration and tracking deep runs are also areas of improvement still, and may stem from strong self-confidence and belief in his athletic abilities to make up for those mistakes.

Despite his weaknesses, getting a 22-year-old with international experience for the Ivory Coast and three full seasons in the Bundesliga for around £25million is a good investment.

In addition, due to his positional flexibility, supreme athleticism, defensive prowess and long-passing, the Mainz man is an ideal fit for a side like Tottenham Hotspur, Manchester United or Arsenal.