Within Italian football there remain many great untold stories. One pertains to the present day, and it involves a coach, a specific style of play and a legacy that has somehow flown under the radar. Gian Piero Gasperini is 58 years old and he has been coaching for over two decades. He is renowned primarily for seven years spent in charge of Genoa over two separate spells, the second of which came to an end in June.

On the peninsula, this partnership between coach and club brought entertainment aplenty, but it didn’t quite catch on elsewhere. This was particularly strange considering the existing fetishisation of idealistic football zealots such as Pep Guardiola and Marcelo Bielsa. In many ways, Gasperini is just like them.

However, unlike his esteemed peers, he has yet to receive widespread praise for his idealistic bent. Instead, he has shuttled around Italy, his sole opportunity with one of the ‘bigger’ clubs coming in 2011 with Inter Milan. He was sacked, winless, after just five games. Within two years, he returned to the place where he first made his name.

His second time around with Genoa saw the same philosophy applied and positive results followed. Gasperini took over a team used to narrowly avoiding relegation to Serie B and got them into the top six in 2015, with Europa League football missed out on only due to mismanagement further up the club hierarchy. Yet, once again, he wasn’t on the shortlist of candidates for top jobs. Instead, he took on a new, arguably even more daunting challenge over the summer.

Generally speaking, Atalanta operate beneath the limelight. If they aren’t yo-yoing between the first and second tier, they are settling somewhere in Serie A’s lower mid-table. The club from Bergamo, Lombardy, are known as ‘La Dea’, or ‘The Goddess’, but their results rarely stray far from the ordinary. Thus, their sitting prettily in sixth place is a strange sight to behold.

Their resurgence is down to Gasperini. For many, leaving Genoa for Atalanta represents, at very best, a small step back. However, for the coach it represented a fresh opportunity with a club whose traditions are rooted in the long term.

Throughout history many great players have come through Atalanta’s youth system, which is regarded as one of the most productive in Italy. Angelo Domenghini was born in the province of Bergamo and turned out for the club in the 1960s, helping them to their only major piece of silverware — the 1963 Coppa Italia — before moving to Inter Milan and playing a vital role in their domestic and continental successes under Helenio Herrera. Legendary sweeper Gaetano Scirea also came through the Atalanta academy before winning virtually everything there was to win with both Juventus and Italy throughout the 1970s and ‘80s. And others, such as Milan icon Roberto Donadoni and intelligent midfielder Alessio Tacchinardi, would follow in Domenghini and Scirea’s famous footsteps.

Such a prolific youth policy undoubtedly played its part in Gasperini’s joining the club. Indeed, in an interview last month he confirmed his desire to build a team around those foundations. “It can be done because the club is serious, the structures ideal, the fans passionate, and I have already seen interesting players in the youth sector,” he told La Gazzetta dello Sport. “The project is clear and focused on those players in the academy … An Atalanta styled after Athletic Bilbao, maybe without reaching quite those excesses.”

With such a strategic plan, few expected Gasperini to get the team firing inside his first six months. Thus, there was little surprise surrounding their start to the league season. After opening with a 4-3 loss at home to Lazio, they had a man sent off in a 2-1 defeat away to Sampdoria. A 3-0 thrashing away to Cagliari preceded a home defeat to lowly Palermo. It was classic Gasperini; chaotic, colourful, volatile, entertaining. It was idealistic, but the results weren’t there. However, a 3-1 win over newly promoted Crotone spurred the team on, and wins over Napoli, Inter, Roma and Gasperini’s old side Genoa duly followed. 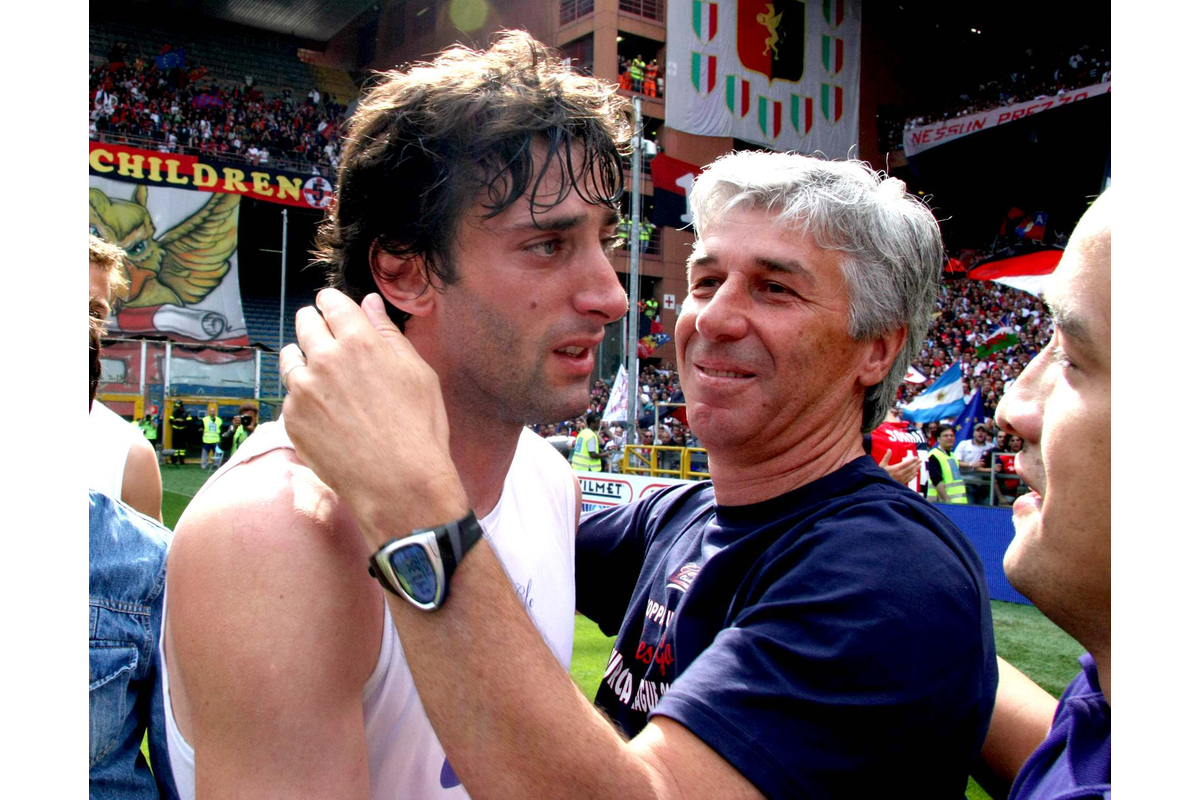 The system and style has been recognisable — a fluid 3-4-3 with man-marking, intensity on and off the ball and a constant activity — no team in Serie A has made more interceptions than Gasperini’s Atalanta. What makes their performances even more romantic is the fact they are fuelled by an exuberant young core.

The three-man defence is underpinned by 22-year-old Mattia Caldara, a polished and intelligent centre-back. The midfield has been given an injection of dynamism by 19-year-old powerhouse Franck Kessie and the forward-thinking 22-year-old Roberto Gagliardini. Another 22-year-old, Andrea Conti, brings pace and verve on the right flank, while up front the line is led by 21-year-old Andrea Petagna, a 6’2” colossus with an exceptional touch. Caldara, Conti and Gagliardini are all products of the club’s youth academy; the latter has already been brought into the Italy national team.

Alongside Gasperini’s tactics and the fast rise of a number of promising youngsters, the revival of a number of older players has only added to Atalanta’s cult status this season. Versatile 30-year-old defender Andrea Masiello has been excellent, 24-year-old midfield workhorse Remo Freuler is no longer unknown, and 27-year-old Slovenian international Jasmin Kurtic has built on solid displays last term. The only player to fall under the category of ‘star’ is Alejandro Gomez, a tricky attacking midfielder who thrives between the lines.

Atalanta’s stunning run of form came to an end with a 3-1 loss in Turin at the hands of reigning champions and league leaders Juventus, but they put up a spirited performance in defeat. And, while the same result against Udinese suggested a beautiful bubble had been burst, they continued to play the Gasperini way. “I think quite the opposite,” the coach told Sky Sport Italia when asked if his team's run was over. “If we keep performing like this, then we can’t be downhearted.”

The story continues; the idealist continues his search. It’s hard not to imagine that this particular chapter in Atalanta’s history has many more exhilarating twists and turns to come.