Things have not quite gone to plan for Gareth Bale at Real Madrid. The Welsh star has scored goals – several important ones, too – but there has never been a connection between himself and the club’s supporters.

That is, perhaps, because too much has been expected of Bale. When he joined Los Blancos from Tottenham for £90million in 2013, the expectation was that he would reach the heights of, and eventually replace, Cristiano Ronaldo. Instead, he remained in the shadow of the great Portuguese until he departed last summer.

The fact Bale has been plagued by injuries has not helped. This season, he has been restricted to just 19 starts in La Liga – scoring eight goals – and five in the Champions League. Consistency is difficult to achieve without a prolonged run of games.

Even with all the mitigating factors, Bale has clearly not done enough to impress Zinedine Zidane, back at the Bernabeu for his second spell as the club’s manager. When the Frenchman left last year, helped to a third successive Champions League title by a Bale brace in the final, there were murmurings of a rift between player and coach.

Bale himself openly spoke of a potential departure. “I need to be playing week in, week out, and that's not happened this season,” he said. “I have to sit down with my agent in the summer and discuss it.”

Instead, it was Zidane who left. Bale appeared to be handed an opportunity, a chance to kickstart his Real Madrid career. But that is not how things transpired. Now, after six years, it seems the Welshman’s career at the Bernabéu is almost is over. The whistles from his own fans in Sunday’s win over Athletic Club almost confirmed that.

“Something interesting happened on Sunday: his first touch was whistled, but then, when he was through one on one, he dinked the ball just over the bar and was widely applauded,” former Real Madrid striker Jorge Valdano told Spanish radio station Onda Cero.

“People still expect promise that has never been fulfilled. To his credit, he has fulfilled this promise at critical times, with trophies on the line, but, judging his performances regularly, he has produced less than expected.”

The question now is where Bale heads next. A permanent transfer – due to the extortionate asking price – appears unlikely. So Real Madrid are likely to consider a loan move. And Manchester United, in need of improvements to their squad this summer and long-term admirers, are said to be interested.

Bale will be 30 this summer and is under contract until 2022. His injury record and high salary are likely to prove a sticking point, so a loan move for United could make sense. They would need to pay Bale’s wages, and a reported £5million fee, but it could represent a relatively risk-free move. 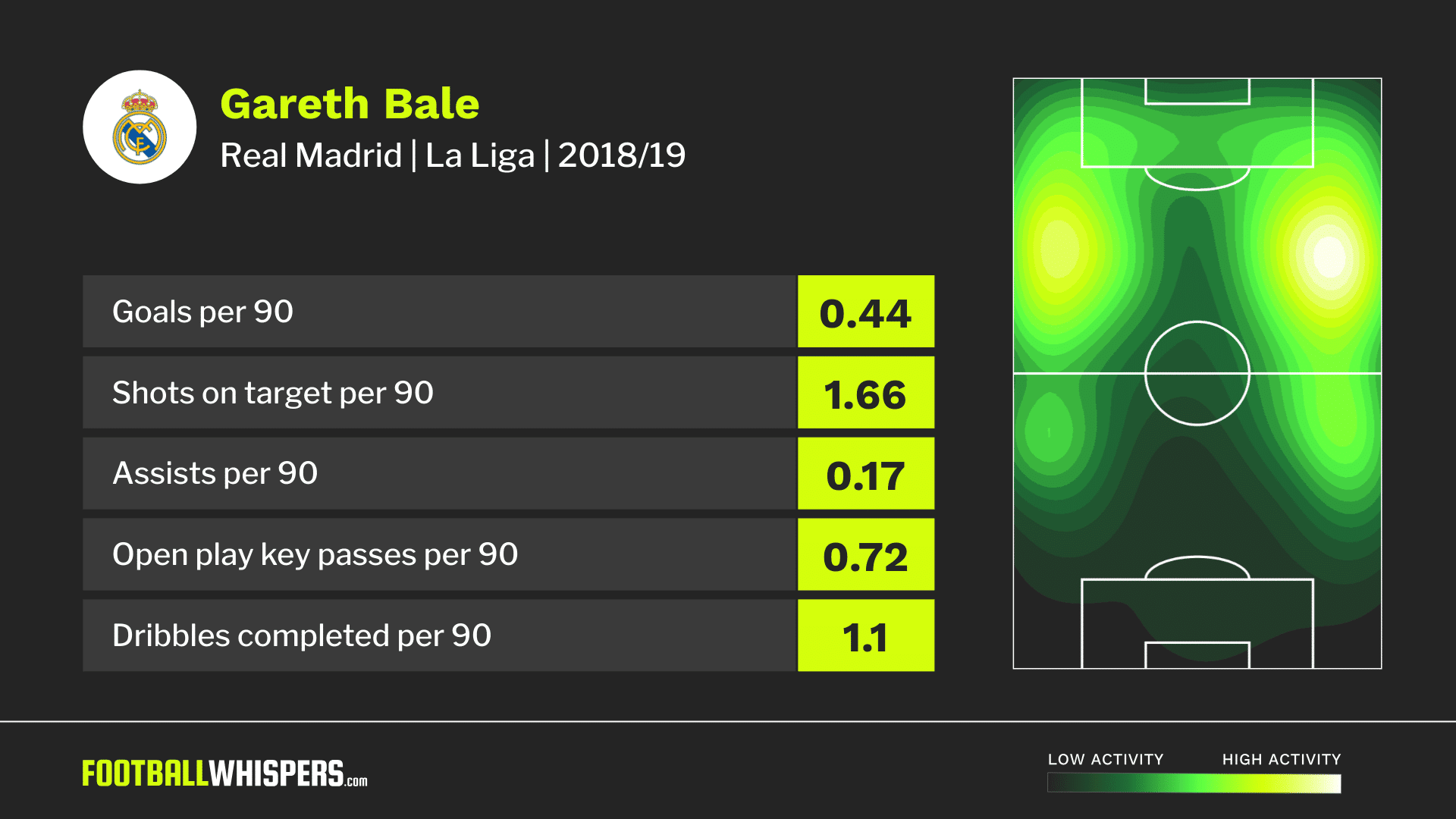 United, of course, must first consider whether Bale would significantly improve their attacking options.

Both Anthony Martial and Marcus Rashford have performed well in wide areas this season, although both have faltered somewhat in recent weeks. Alexis Sánchez, meanwhile, remains on the periphery; ineffective when he has been given an opportunity by Ole Gunnar Solskjær.

Perhaps, then, Bale will be brought in as a replacement for the Chilean. Though he has not met the requirements of a forward at Real Madrid this season, the Welshman remains one of Europe’s elite attacking players. He has struck 14 goals in all competitions, at a rate of 162 minutes per goal – a better ratio than any Manchester United player.

Bale’s performances, too, have always seemed dependant on his confidence. He has not had much of that recently at Real Madrid, where he is constantly berated for any below-par displays. In an environment where he feels more comfortable, more valued, Bale may rediscover his best form.

United may look at James Rodríguez’s two-year loan move from Real Madrid to Bayern as an example of a deal that could be struck. The Colombian added quality to their attack for a relatively low cost and provided an alternative to spending big money on a permanent deal.

Whether a similar loan for Bale would prove just as successful remains to be seen. What is clear is that the former Spurs man needs the move for the good of his career. He is no longer a youngster. And he is underappreciated at Real Madrid, where his relationship with the notoriously fickle fans appears to have hit rock bottom.

“I don’t know,” Zidane said on Sunday when asked why the fans chose to whistle Bale. “Honestly, I don’t understand it. I feel for him. I would like to have seen him score today.”

Bale did not score and the headlines that followed were focused on his imminent departure. Perhaps a move to the Premier League, to Manchester United, will bring this sorry saga to an end.