Every great sporting moment through history has at its root an elevating motivation, whether it's triumph through adversity, a refusal to quit, an act of belligerent defiance against one's critics or a volcanic desire to prove someone or everyone wrong.

When Muhammad Ali, aged 32, masterfully picked his moment to spring to life and knock out George Foreman during their historic ‘Rumble in the Jungle' in Zaire in 1974, regaining the world heavyweight title, he was driven by those who deemed him too old, past it.

On Saturday May 26, 2018, during the Champions League final between Real Madrid and Liverpool at Kiev's Olympic Stadium, Gareth Bale carved out his own sporting masterpiece. It may not hold such weighty historical significance as many of the aforementioned, perhaps lacking that same time-standing-still effect, but within the narrower context of modern, elite-level football, the Welshman produced a inspired moment of the highest order.

Arriving from the substitutes' bench in the 61st minute, replacing Isco, who'd been preferred in the starting line-up, Bale leapt, swivelled and inverted to connect with Marcelo's cross from the left, sending the ball looping beyond Liverpool goalkeeper Loris Karius with a perfectly executed bicycle kick, just three minutes after coming on, and with his very first touch of the ball.

And his motivation for making such a grand entrance and a lasting impact was plain – made even clearer with his post-match comments. Of course, as a world-class athlete, he, like any of his peers, is intrinsically driven to produce his best form on such stages as the Champions League final, but a desire to set the record straight on a couple of matters was patent. 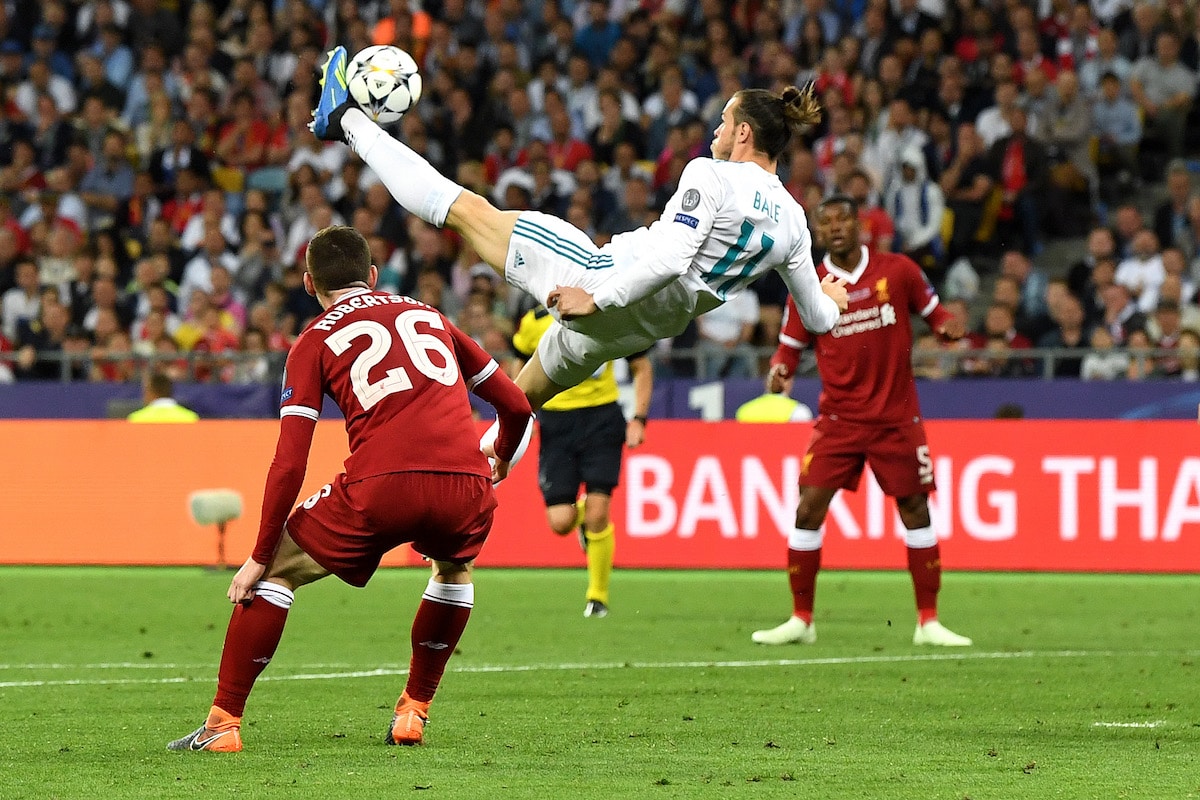 “Obviously I need to be playing week in week out, and that hasn't happened this season for one reason or another,” Bale told BT Sport on the pitch after the final whistle.

“I had a five or six week injury at the start of the season and I've been fit ever since. Obviously now I will have to sit down in the summer and discuss things with my agent, and take it from there.”

Seen by some as a come-and-get-me plea to any interested parties ahead of a long-anticipated departure from the Spanish capital, Bale's first admission of discontent in five years in Madrid seemed to stem from a bitter disappointment at being overlooked by manager Zinedine Zidane, despite having proved his form and fitness with five goals in his last five La Liga games.

There was also a hint of Bale wanting to show the world that, despite the persistent injuries he has suffered over the last couple of years, he remains one of the best footballers on the planet, and an asset to any side, including the now-back-to-back-to-back champions of Europe.

And there was no better way to simultaneously make both those points than producing one of the greatest goals of all time, rubber-stamping with a second strike from distance, which owed largely to a disastrous error of handling by Karius, to seal a 3-1 victory for Madrid.

There are certain criteria that must be met for any goal to be considered truly great. Firstly, it must exemplify a level of technique, confidence and inventiveness unthinkable to any non-elite player, let alone the watching public; we at once want to believe it was entirely deliberate, yet so difficult as to be almost completely unrepeatable.

In this regard, it can really be any kind of goal: a mazy dribble beyond multiple opponents; a rocket from long range; a sweeping team move; or a wickedly ingenious finish from inside the penalty area – whether volley, chip or smash.

Bale's breathtaking strike had this in spades. From his burst from right to centre as Marcelo progressed down the left, to the way he calibrated – at split-second speed – the flight of the ball, adjusted his body position and pulled off the most difficult of techniques, connecting with both power and precision, this was a goal of the highest technical order.

For any goal to be considered truly great in a historical context, however, the occasion matters, so too the in-game situation; if Bale scored the exact same strike as the fifth goal in a 7-0 rout of Real Zaragoza in the Copa del Rey third round, it just wouldn't be the same; and he, tellingly, wouldn't celebrate it as vociferously and passionately, either.

It matters more when it matters more. Like Zidane's famous left-foot volley in the 2002 Champions League final for Madrid against Bayer Leverkusen at Hampden Park, or Carlos Alberto's angled thunderbolt to round off the team move by the team, for Brazil in the 1970 World Cup final. On a technical level, Bale's strike trumps both.

Comparisons will be draw with team-mate Cristiano Ronaldo‘s similar effort earlier this season against Juventus. But in a final, tied 1-1 at the time, compared to a last-eight first leg, Bale's goal again comes out on top.

Bale's first strike against Liverpool in the 2018 Champions league final will be referenced all through the summer, when it will be claimed to have piqued Manchester United‘s interest in signing him, or to have motivated Madrid to offer him an improved contract.