Lille is quickly turning into the destination for Premier League scouts.

After the departures of Nicolas Pépé and Rafael Leão in the summer, there was a feeling the Stade Pierre-Mauroy wouldn’t be such a hotbed for talent spotters. But then the Ligue 1 club went out and bought Victor Osimhen, Yusuf Yazıcı, Renato Sanches,

Not to be outshone by the new arrivals, 20-year-old Boubakary Soumaré and 22-year-old Gabriel have stepped up this term, impressing immensely in Christophe Galtier’s side.

The former was linked with a big-money move to Liverpool, Newcastle United, Chelsea, Wolverhampton Wanderers, Real Madrid or Borussia Dortmund in January but a firm bid never materialised and he remains with Les Dogues. Interest in the latter only started to pick up pace towards of the window, with Le10 Sport claiming Arsenal and Everton saw bids rejected by Lille.

The Ligue 1 side have extended Gabriel’s contract, with the Brazilian now bound to the club until 2023 unless a significant offer arrives. Lille expect increased bids to arrive this summer, especially if Gabriel continues to impress.

But why are Premier League clubs so interested in a player with just 30 Ligue 1 starts and six Champions League appearances under his belt?

Despite his relative inexperience, Gabriel has shown he’s got what it to takes to compete at the top level. He hasn’t looked out of place in Europe’s elite club competition and his performances domestically have helped Lille climb to fourth in the table. They currently sit just six points behind second-placed Marseille.

Their last league outing was a 1-0 win over Rennes, the team sandwiched between Lille and Marseille. The 22-year-old repelled most things on the day, winning 60 per cent of his aerial duels, 100 per cent of his tackles and completing 86 per cent of the 62 passes he attempted. It was a mature and dominant showing. 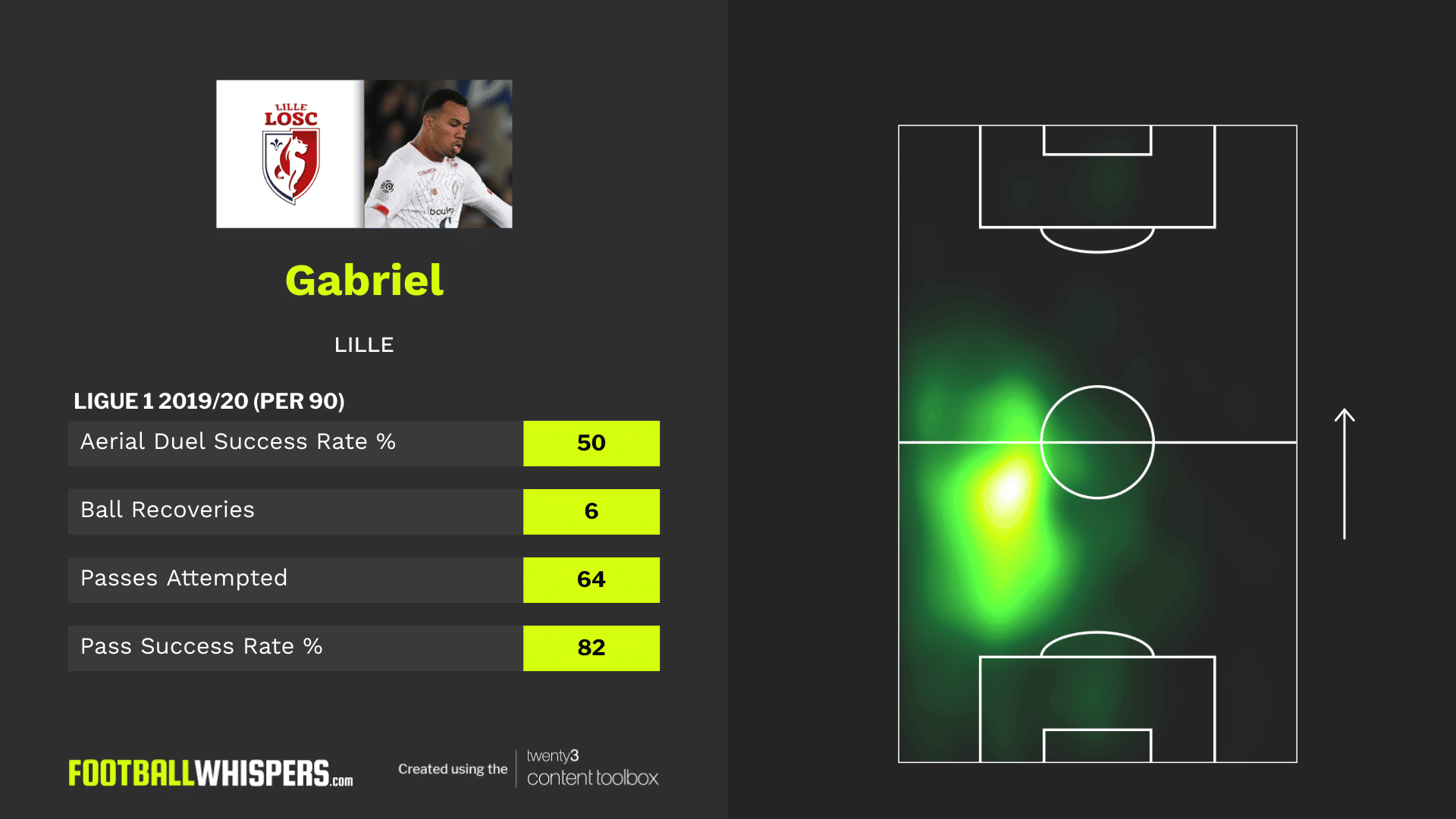 The left-sided centre-back has put in a number of those this term. He's shown his versatility and consistency, too, performing as part of a back three on occasion. What strikes you when watching Gabriel is just how composed he is.

The former Avaí youngster has a presence about him. When fronted up by a fleet-footed winger, he doesn't panic. He doesn't go to ground either. He tends to just control the space and then claim the ball, much to the annoyance of the opposition. He wins 70 of his ground duels on average and 50 per cent of his aerial battles. The 6ft 3ins centre-back puts his frame to good use.

But defenders aren't just judged on what they do in the defensive third these days. They're also tasked with influencing proceedings in the attacking areas. And Gabriel does just that.

He's heavily involved in Lille's build-up play, averaging 64 passes per 90 and finding a team-mate with 82 per cent. Unlike some, however, he isn't just playing simple five-yard passes to midfielders.

Gabriel acts as a deep-lying playmaker for Lille. He can play passes between the lines but his pièce de résistance is the ball he plays over the top of the opposition's defence. Gabriel sprays passes all over the pitch but the real technique in what he does is the amount of backspin he gets on the ball.

Not only does he get the ball into certain areas, he weights the passes so well that team-mates are usually able to make the most of them. They aren't just hopeful balls over the top. They're precise, pinpoint passes. And that is what separates him from others in his position.

He plays 40 per cent of his passes forward and, of those long-balls, he's accurate with more than 50 per cent.

The Brazilian ticks a number of the boxes required for a modern-day centre-back. And given these players come at a premium these days, being able to snag a player with all the potential to be an elite one for around £30million, it makes a move for him a no-brainer. It'd be a risk but one clubs need to take to get ahead.