“Jesus has barely stopped scoring or impressing in the matches he has played since that February night,” wrote Nick Ellerby in his profile of Gabriel Jesus in September 2017.

The Brazilian had been in England for nine months by that point and was coming off a run of scoring four goals in three league appearances. In total — from that point in the early months of 2017/18 back to when he joined Manchester City midway through the 2016/17 season — he’d scored 11 in 15 in the Premier League.

In the 15 months of league football since then, he’s scored just ten.

Gabriel Jesus arrived in England to a fanfare that had been marinating since his signing was announced in the summer of 2016. ‘The new Neymar’ ran a headline in The Guardian. City beat Barcelona and Paris Saint-Germain to his signature.

His decision to stay at Palmeiras until December, the end of the Brazilian season, was justified. He helped the club win their first Brazilian league title since 1994, and flew to England having picked up the league’s Player of the Year award as well. 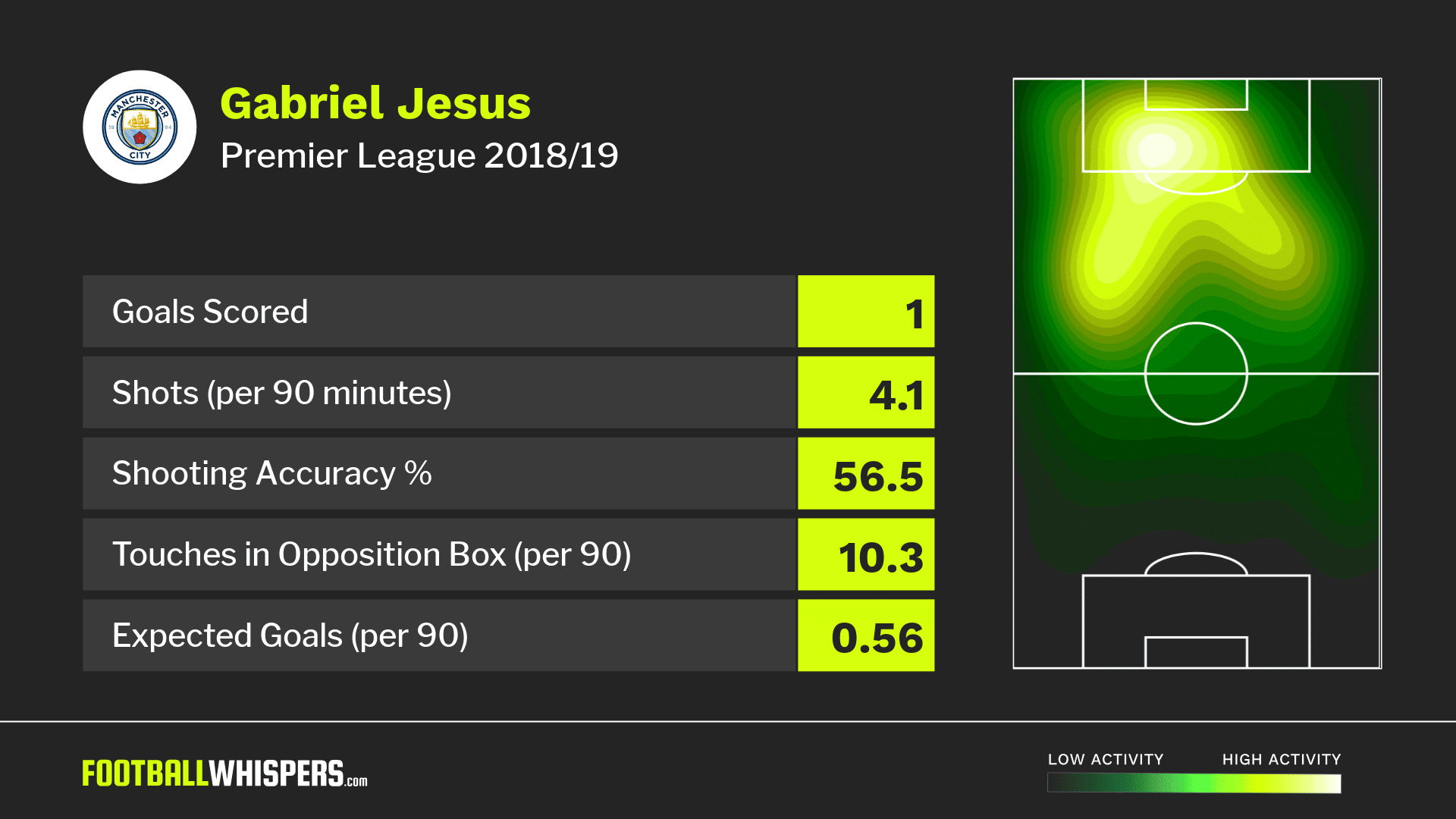 Still just 19, Jesus was the club’s third-most expensive signing that season, after John Stones and Leroy Sané and just ahead of İlkay Gündoğan. He was part of the start of City's revolution under Pep Guardiola.

Despite his age, he was mature. “A football player grows up faster than other people,” he said in an interview back in 2016. “I grew up very quickly because of the difficulties and responsibilities that I have always had.”

The only thing to stop him in his first nine months at City was a metatarsal injury, keeping him out from February to May. On New Year’s Eve 2017, he sustained another setback, this time a medial collateral ligament injury which kept him out until the following March.

He admitted, after he’d made a return, that the problem was still on his mind.

“I think tonight I still played with some fear,” he said after a Champions League match against Basel, “there are some movements when I still have some fear to get injured again.

“I know anything can happen, but I'm sure that the more you play, the easier that fear is going to go away.”

His knee injury came in the midst of what turned into an eight-game goal drought in the league. Worryingly for him and for City, he’s approaching that number again — his substitute appearance against Chelsea making it his sixth in a row without scoring.

This isn’t for a lack of chances. He’s had three shots inside the six-yard box without netting any of them, and his return for 3.16 open-play expected goals is one strike in August against Huddersfield. 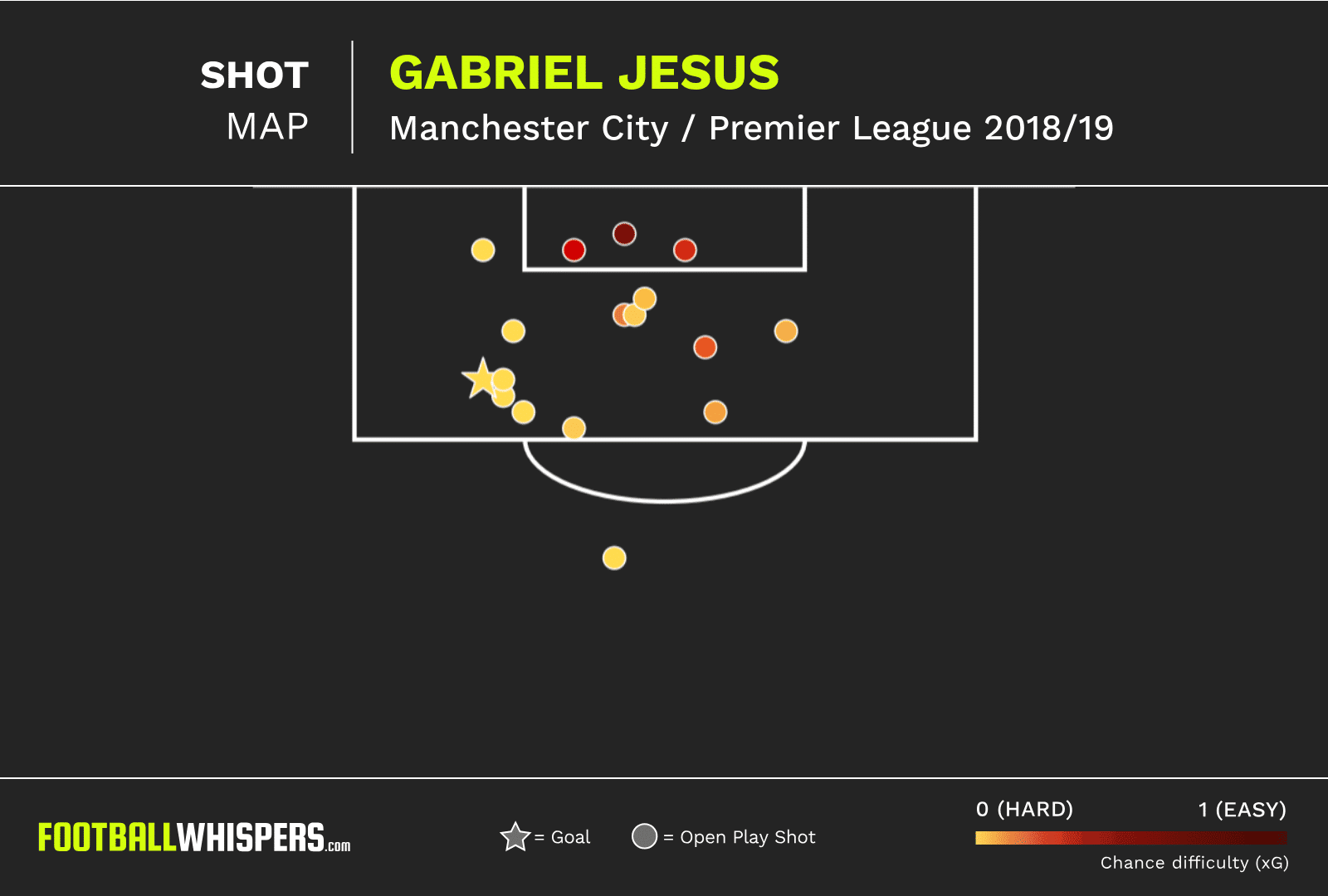 It’s certainly true that his role seems to have diminished this season. Interrupted by injury, he still managed ten appearances in that second half of 2016/17. Eight were starts, and his 651 minutes makes an average of 65.1 minutes per appearance.

He was, therefore, no young supersub; he was a player on the brink of being a first-team regular.

Last season, his status was similar. His minutes-per-appearance average was 57.7, 19 starts and ten appearances off the bench.

In the current campaign, the balance of starts and sub appearances has switched, making four and nine of each. He plays just 39.1 minutes on average every time he gets on the pitch.

Popping up with two assists in the last month — against West Ham and Watford — might help his cause, but his chances seem to have been hampered by the form of City’s other attackers.

Until the last couple of weeks, it looked like Sergio Agüero had put his injury troubles behind him and continued to bang in the goals. Raheem Sterling and Sané just keep getting better and better, and Sterling has been played through the middle semi-regularly by Guardiola in the past couple of years.

In addition, the return of Benjamin Mendy this season has meant that City have moved away from the 3-5-2 that gave Jesus more of an opportunity of game-time.

A combination of the two have squeezed the Brazilian out, but it’s important to remember that he’s still just 21.

His performances haven’t dropped drastically. An expected goal contribution of 0.83 per 90 minutes is pretty darn handy and a hat-trick against Shakhtar Donetsk demonstrated how he's retained his clinical edge even through a rough patch.

Jesus will just need to bide his time. His future remains bright.