Gabriel Jesus‘ Manchester City career started with a bang then a break.

The Brazilian arrived from Palmeiras for £27million in January 2017 and duly got down to business.

On his full debut, he claimed an assist in City's FA Cup win over Crystal Palace. A few days later, he scored and bagged another assist on his first Premier League start as Pep Guardiola's men made light work of West Ham United in a 4-0 win.

Judging a player on a few games is obviously perilous, but Guardiola had no qualms labelling Jesus as ‘the future' of City.

In that West Ham game, Jesus was uncontainable, terrorising the Hammers' defence with a blend of skill, aggression and precision in the final third.

Even then, still only 19, he looked a readymade successor to Sergio Agüero.

That was the bang. The break came soon after, two weeks later, in fact, as Jesus succumbed to a broken metatarsal bone in his foot in just his fourth appearance.

He missed almost three months but returned to finish the season with four goals and three assists in five outings. The teenager ended the 2016/17 campaign having managed 0.96 goals per 90, with his open-play xG per shot of 0.25 unmatched.

It felt like the dawning of a truly great career, one which would emulate his predecessor in the City attack.

But it's two years later and the club are reportedly willing to ‘offload' Jesus to fund their quest for Benfica wonderkid João Félix.

Once the future of City's attack, the Brazilian now finds himself being politely ushered out the Etihad door as Guardiola covets the next big thing.

So, has Jesus' career really stalled that much? Let's take a look.

He started the 2017/18 season impressively with six goals in his first seven league games, including a brace against Liverpool. With strikes against Feyenoord and Napoli, his tally for the season was nine by mid-October.

Injury struck once more, however, with knee medial ligament problem keeping him out for six weeks. After scoring against Basel in March 2018, he admitted that the fear of getting injured once more impacted his thinking while on the pitch. 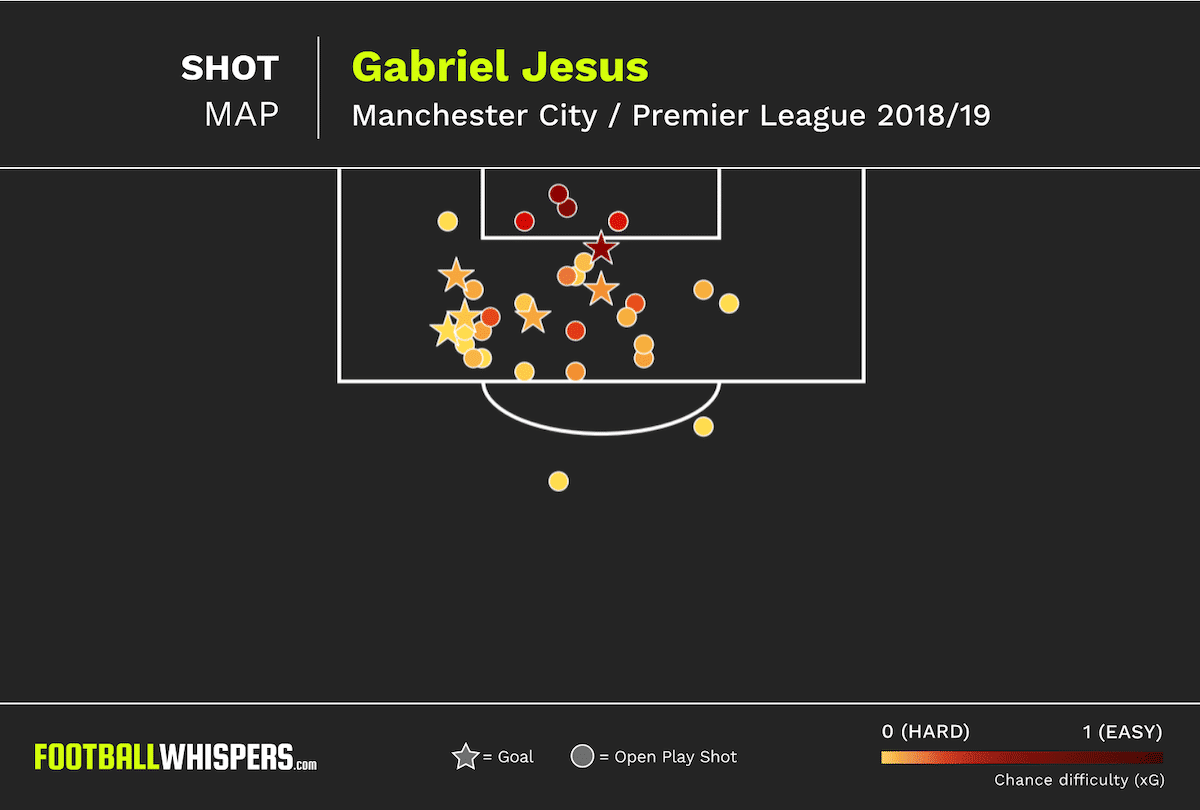 A little less aggression didn't stop the goals, though. He ended the season with 17 in all competitions, his 0.7 per 90 ranking him fifth in the Premier League. Significantly, he scored the goal which saw City hit the 100-point mark.

Having drawn a blank in five starts at last year's World Cup, however, he has faded into the periphery at City this term. Despite staying relatively clear of injury, he has had to make do with playing second-fiddle to Agüero who, having embraced Guardiola's methods, has maintained his place at the top of the game.

Jesus' return of 19 goals in 42 appearances would suggest he's having the season of his life. That's not quite the case, though. 12 of those goals have come in Europe or cup competitions. His hat-trick against Shakhtar Donetsk in the Champions League group stage helped City reach the last 16 but his fourth goal wasn't as important, capping the 7-0 rout of Schalke.

There was the four-goal haul against Burton Albion in the EFL Cup, yes, but Jesus would have been immensely frustrated at not having been given just 19 minutes across City's trilogy with Tottenham Hotspur last month.

With City needing a goal to beat Spurs in the Champions League, Guardiola sent on Leroy Sané as Jesus remained on the bench. It felt strange that, having made two substitutions, the coach opted against introducing a poacher for the final stages, especially after scoring the winner in the FA Cup semi-final against Brighton & Hove Albion. 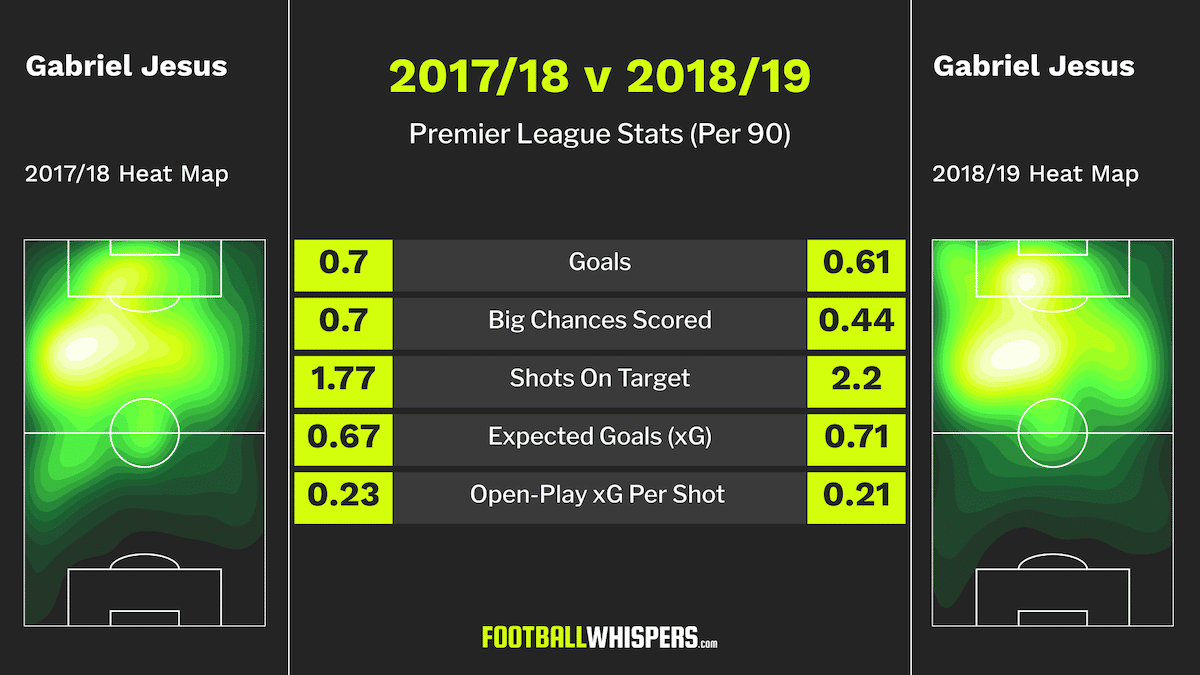 Jesus' minimal role in recent weeks may force him to consider his future. Agüero's 31-goal season means the Brazilian is unlikely to unseat the club's all-time top scorer at the head of the attack and, with the club seemingly pursuing other targets, his career at the Etihad may be coming to an abrupt end.

If City are willing to entertain offers, interest in Jesus is likely to be extremely high. Having just turned 22, he has the potential to become a top striker and clubs will certainly recognise how difficult it is to come across a player of his considerable poaching prowess.

Jesus remains one of the deadliest penalty box predators. This season, his 0.61 goals per 90 see him ranked fifth in that particular category, while he averages more shots on target than any other player per game with 2.2. He manages 9.34 touches in the opposition box and boasts a remarkable 0.71 expected goals per 90, too.

He still has the skills, he still has the stats. Somebody will benefit from Jesus' talents but it's looking increasingly likely that, in the long-term, it won't be City.