When Gabriel Jesus first arrived in England in January 2017, he was something of an unknown.

Manchester City parted with a fee rumoured to be in the region of £27million for the Brazilian forward, who had made just over 80 appearances for Palmeiras and had netted 28 times.

It was clear Jesus had potential but the high transfer fee seemed a risk to take on a teenager. However, City clearly felt he was the man to succeed Sergio Agüero as the leader of the attack at the Etihad.

At the time there was plenty of talk surrounding the future of the Argentine forward. The general feeling was the one-time Atlético Madrid hitman wasn’t suited to what Pep Guardiola wanted.

Jesus got off to a flyer. On his full debut for City in the Premier League, with Agüero on the bench, he claimed an assist and a goal. In the process, he became the youngster player to do so for the Citizens. A metatarsal injury halted his progress but he still finished the 2016–17 campaign with seven goals and four assists in 11 matches.

In the following campaign, Jesus found the net on 17 occasions. The 2018/19 season, meanwhile, saw him have his most prolific year to date as he netted 21 times across all competitions.

However, only seven of those arrived in the Premier League with Agüero adapting his game to suit the demands of the Guardiola system. The No.33 appeared in just over 1,000 minutes in the English top-flight, a significant drop compared to the 1,600 he featured in during the 2017/18 season.

Agüero was once again the club's undisputed first-choice striker in a season many thought would see him pass the torch on to Jesus.

There was a feeling of déjà vu during the summer when the Brazil international was given the No.9 jersey. Many took it as a sign he’d be more involved after an impressive Copa America showing and he's already appeared in 650 minutes in the Premier League this term.

But 180 of those came in the last two matches for City with Agüero sidelined through injury and despite the increase in his game time, Jesus hasn’t responded in goals or assists.

His opener against Burnley in the 4-1 win was the first since he scored against Crystal Palace on October 19. 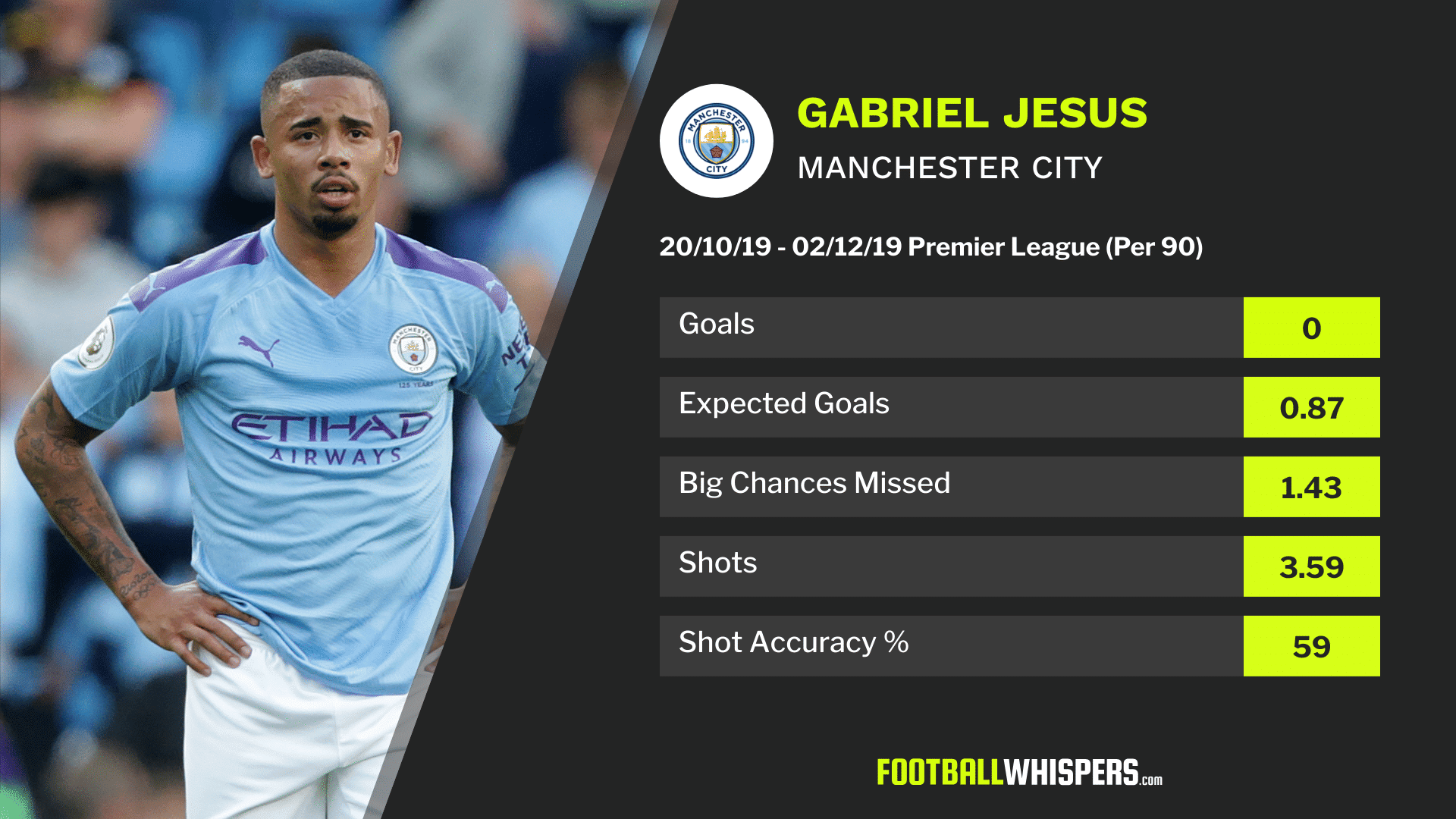 During that period, Jesus appeared in 501 minutes for City across the Premier League and the Champions League. All he had to show for it was two assists, one against Atalanta and one against Shakhtar.

He was the subject of the fans’ ire after the 2-2 draw with Newcastle United on Saturday after he spurned a number of decent chances for the champions. The dropped points at St James’ Park meant leaders Liverpool managed to extend the distance between themselves and City to 11 points.

Jesus redeemed himself against Burnley but his patchy form in front of goal remains a talking point. Though it isn't the largest of sample sizes, the drought he had in between goals wasn't just bad luck. As the graphic above shows, the City No.9 was getting chances but he was unable to convert. It was poor finishing on his part.

His expected goals per 90 average was 0.87 but his post-shot expected goals average was 0.63. The latter stat takes into account where the shot was taken from and where the effort lands on target. Elite finishers add value through where they place the ball. Wasteful ones decrease the value with poor shot selection. During this poor run of form, Jesus fell into the latter category.

At other clubs, this would be tolerated as it is something that should improve with age. But City aren't most clubs. Guardiola wants perfection and his players perform to extraordinary levels on such a regular basis that is has become the norm.

In recent months, the champions have been linked with a host of strikers. João Félix was reportedly on the club's radar before his big-money move to Atlético. Luka Jović was also mentioned while an Eintracht Frankfurt player. Lautaro Martínez has been mooted as a potential signing, too, while Kylian Mbappé remains a target if reports are accurate. All of these would arrive and replace Jesus as the heir to Agüero.

It's unlikely City strengthen their offensive third in January with all eyes on defensive reinforcements. But it wouldn't be extreme to say the City No.9 may have the rest of the campaign to save his career at the Etihad.

If he continues to be wasteful in front of goal, Guardiola and the recruitment team will seek out someone who isn't. Unlike others, they have the finances to do just that.