Over the summer Gabriel Jesus claimed Manchester City's vacant No.9 jersey having worn 33 since arriving in England in January 2017. But it hasn't had the desired effect.

The shirt, last worn by Nolito in 2016/17, is usually reserved for a club's first-choice striker but, at City, Sergio Agüero is the main man and the No.10 adorns his back. Not that you can read too much into shirt numbers. They are largely symbolic, after all. To underline that point Claudio Bravo is City's No.1, even though Ederson is the undisputed first-choice keeper at the Etihad.

Either way, after seven Premier League fixtures, Jesus would have hoped for more than 192 minutes of top-flight action.

On Saturday the São Paulo native was handed just his second start of the campaign and his first since leading the line in the 5-0 opening-day demolition of West Ham United. As he did in London, Jesus marked the occasion with a goal for Pep Guardiola's side – this time in a 3-1 win at Everton.

In 37 Premier League starts following his switch from his homeland, Jesus has bagged an impressive 29 goals. Goals per 90 is the most accurate measure of a striker's goalscoring ability and Jesus averages 0.76 per 90 – the fifth-most of any Premier League forward in that era. 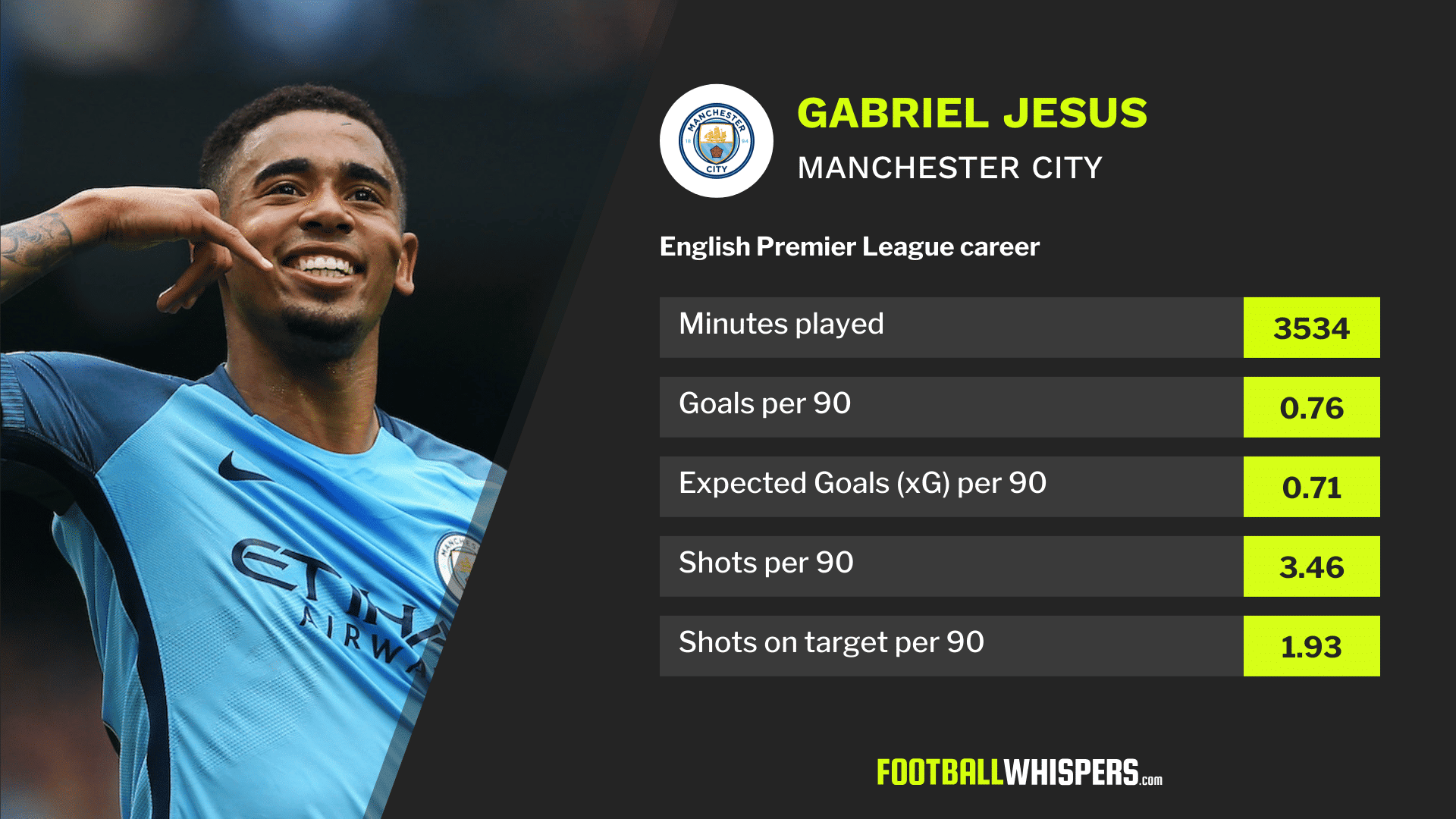 He is well aware of his own ability. The forward told Esporte Interativo: “I'm over the ‘I have to wait' phase. I've been here for almost three years, it's my fourth season, and that makes me want to play more.

“Obviously it's very hard to compete for a place with Agüero, the biggest legend of this club, although it's good for the team, he plays well when in the team and I do the same. I do understand Pep's decisions and respect Sergio, his history here and what he's doing now.”

After witnessing Jesus score a stunning diving header in victory at Goodison Park, Guardiola was typically diplomatic. “He’s special. I read the interview and it was perfect. It was incredibly respectful, like Gabriel is,” the City boss said.

“Of course he wants to play. He’s the number nine for the national team, Brazil. He’s maybe the only striker in the world at his level that has to have this mentality.

“Every time he went on the pitch – one second, two minutes, 90 minutes – he plays like an animal. I understand completely. I try but no player, not only Gabriel, will be happy if they don’t play regularly. That is what it is.” 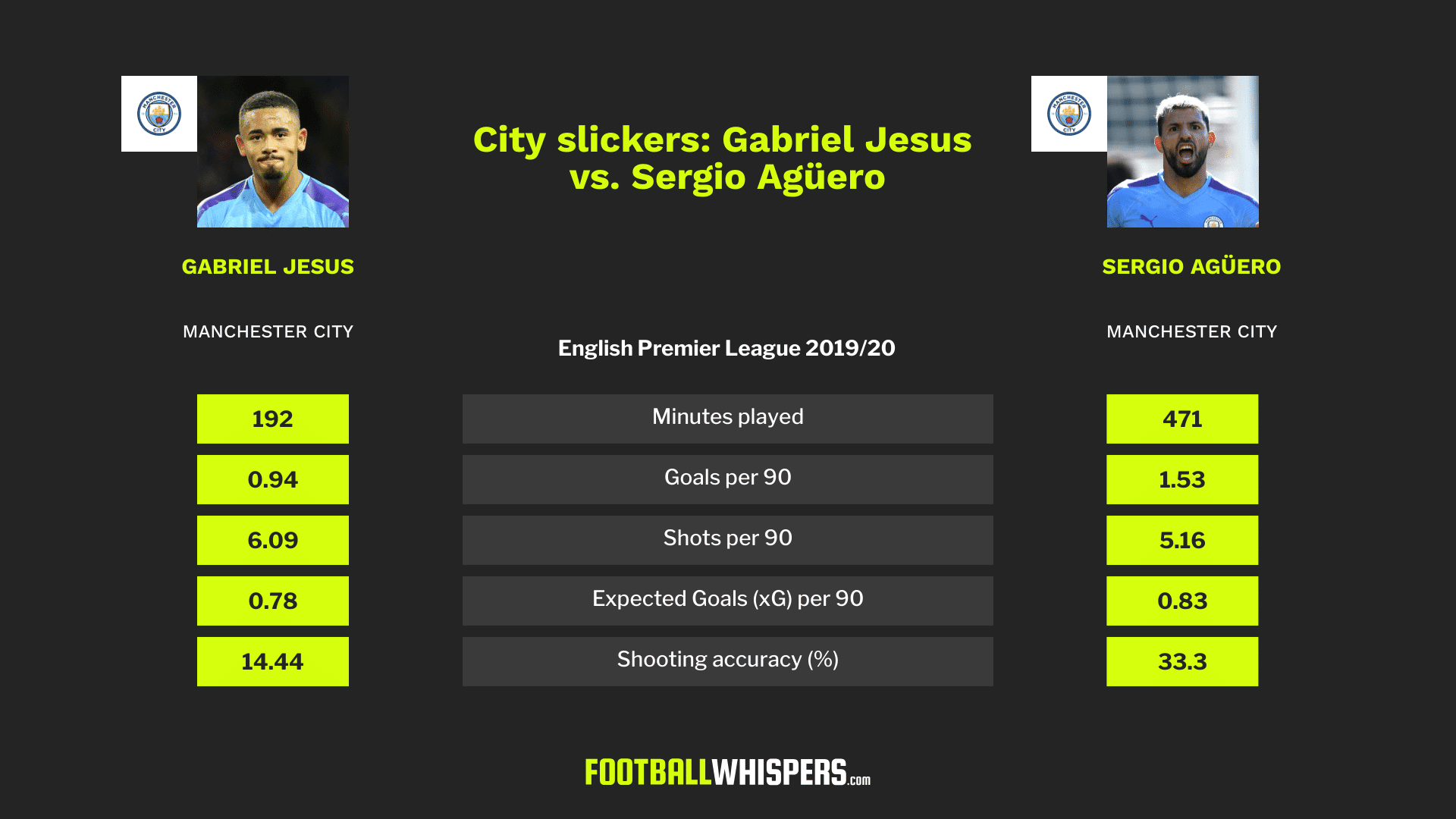 There's no doubt Jesus can consider himself unfortunate to be competing against Agüero, Manchester City's leading all-time scorer. At one point it appeared as though the Argentine was not in Guardiola's plans with Jesus preferred. But the former Atlético Madrid forward has won over his coach and his status as the Citizens' starting and star striker is assured.

Where does that leave Jesus, then? Based solely on his numbers the 22-year-old is among the best forwards in the Premier League and would be a starter at almost any other club.

In terms of his expected data, Jesus has out-performed his expected goals (xG) per 90 score of 0.71 and has a post-shot xG per 90 of 0.8 which no-one can match, suggesting he is adding value to his efforts.

So how does Jesus compare to the Premier League's back-up brigade? It's telling that since he moved to England the only other out-and-out strikers who have a better goals-per-90 ratio are Agüero (0.88) and Harry Kane (0.83).

What's perhaps more interesting, though, is the state of play among back-up centre-forwards in the Premier League right now. Looking at the other members of the top six, only Arsenal have two top-drawer No.9s and Alexandre Lacazette and Pierre-Emerick Aubameyang have forged a way of playing in the same side. After those two, new-boy Gabriel Martinelli is the most senior striking option but he's been used sparingly since his summer switch from Ituano.

Liverpool have Divock Origi who – before his Barcelona brace at least – had looked set to leave Anfield after failing to dislodge Roberto Firmino. Chelsea's secondary striker is Olivier Giroud, although the Blues have lacked a headline striker since Diego Costa's rapid demise.

Tottenham Hotspur let theirs, Fernando Llorente, leave on a free transfer so Heung-min Son or Lucas Moura, neither of whom are proper central forwards, will deputise when Kane suffers his now annual ankle issue.

can play through the middle, 17-year-old Mason Greenwood appears to be Ole Gunnar Solskjær's preference to lead the line in Marcus Rashford's absence.

Jesus is better than all of those, without any question. Across the rest of the league, there aren't any stand-out centre forwards who could be considered a defined back-up. In fact, they mostly fit into one of two categories –

So, in conclusion, Jesus is in a class of his own; the Premier League's best back-up striker, and by some distance.

But he's also in a category all to himself because City can afford to keep a £27million striker in reserve as often as not. Other teams, even in the big six, simply cannot afford that luxury.