It wasn’t that long ago that Gabriel Barbosa was viewed as a flop.

The hype proclaimed him the next Neymar when he burst onto the scene for Santos. It wasn’t long before Europe’s elite started to show an interest in the left-footed attacker.

Internazionale won the race to sign the highly-rated Brazilian. He was tipped to be the next Samba star to steal the show at the San Siro. The legendary Ronaldo did just that, as did Adriano – to an extent – when he was bullying Serie A defenders.

However, it wasn’t to be for the youngster. He failed to really settle in Italy and was loaned to Benfica with the Nerazzurri hoping the switch to Portugal would see him get more first-team minutes.

The loan spell was cut short and he eventually returned to Brazil. Santos was a safe haven for him as he looked to get his confidence back and he repaid their faith with 27 goals in 53 appearances. Many expected him to remain with his boyhood club but Flamengo came calling. 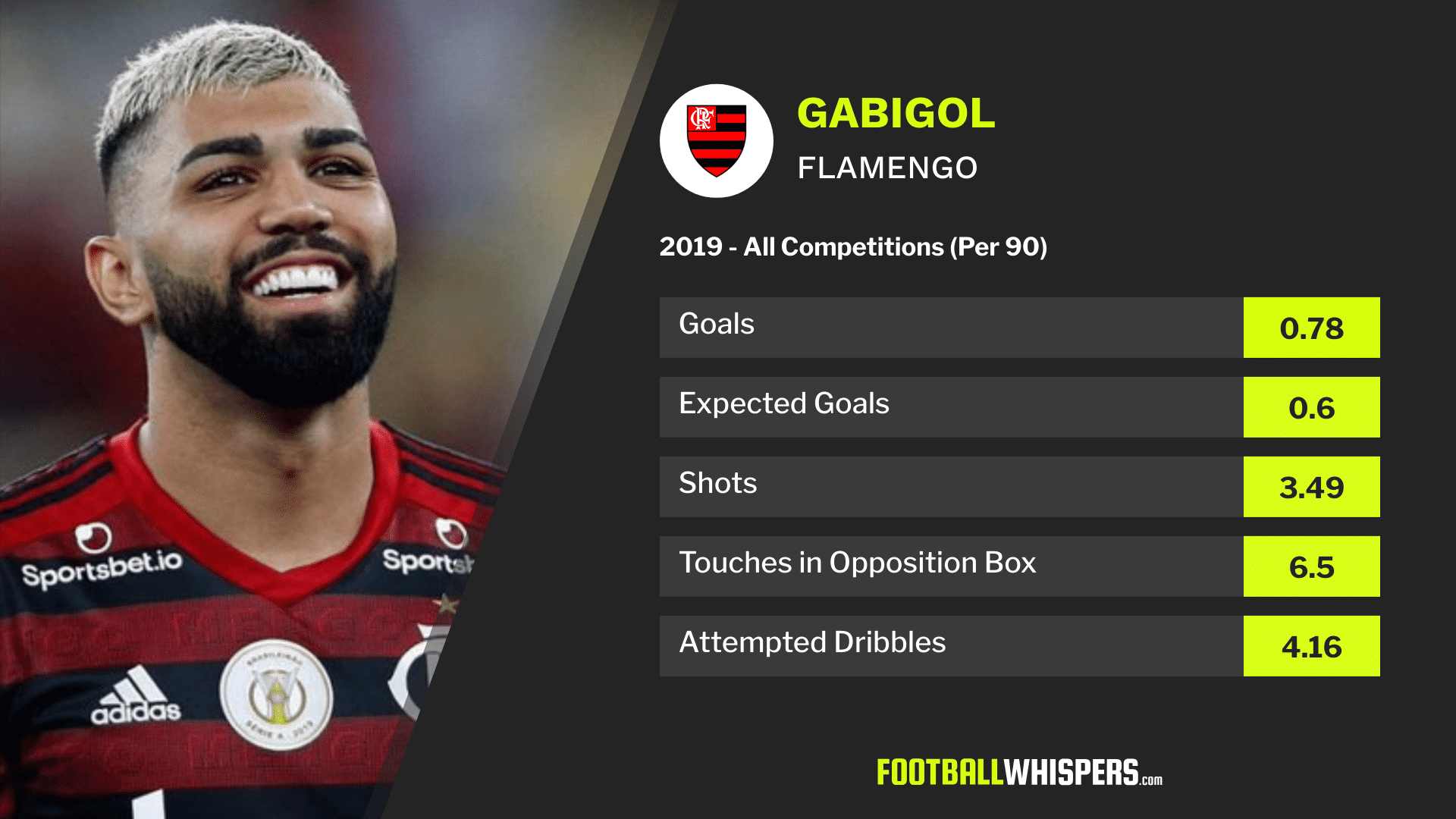 The move to Rio de Janeiro awoke something in Gabigol. With the backing of manager Jorge Jesus, the 23-year-old fired Flamengo to a famous Campeonato Brasileiro Série A and Copa Libertadores double.

And now there’s something of a scramble to get him back to Europe.

West Ham United are believed to be interested in the Brazil international while Crystal Palace made their interest known in him back in October.

Reports suggested Chelsea wanted to add him to their ranks but those have since been rubbished. However, the Blues are in the market for a striker. Moussa Dembélé and Timo Werner have both been cited as targets and the Gabigol denial doesn’t necessarily mean they aren’t in for him, they just might not want it to be public knowledge yet.

Flamengo want to make his loan move permanent but Inter, of course, want to sell him to the highest bidder. Though the richest team in Brazil, Fla may struggle to compete with the finances of a Premier League club.

On one hand, a move for Gabigol could be viewed as risky. He failed to set Europe alight first time around and there will still be concerns about whether his form is exclusive to South America. But his stats paint him as something of a safe bet. He’s been running hot this season, netting 0.78 goals per 90 across all competitions, but his underlying numbers show he’s a goal threat on a regular basis.

His expected goals per 90 average comes in at 0.60 which, over the course of a 38-game season, would see him score around 23 times. For a bit of context there, during the 2018/19 Premier League campaign, 22 goals were enough for the Golden Boot.

A lot hinges on whether Barbosa will be serviced properly. With Flamengo, he’s averaging over three shots per 90. Sébastien Haller, for example, is averaging just 2.4 shots since his own switch to West Ham. If the quantity takes a hit, it is likely Gabigol’s output will, too. However, if the team can ensure he’s having north of six touches in the opposition’s box then it is more than likely that he will be able to repeat those expected numbers, even in England.

The 23-year-old isn’t going to break the bank, either, diminishing the risk even further. Despite his goalscoring exploits, Inter are believed to want to cash in on him to fund a move to Arturo Vidal. A £30million fee has been mooted, more than affordable to a number of top-flight English clubs.

The first move to Europe came too soon for the man tipped to be Neymar’s heir. Now, though, it seems like the perfect time for him.