Manchester City may have swept up the domestic accolades this term, securing a league and League Cup double and setting a plethora of new records, but Liverpool forward Mohamed Salah has been the dominant figure when it has come to individual awards.

The 25-year-old Egyptian pipped City playmaker Kevin De Bruyne to the PFA, FWA and Premier League Player of the Year awards, to which he can now add the Football Whispers Player of the Year gong. And, unlike the other awards he has claimed this term, the voting wasn't close here, with the Reds star securing more than 90 per cent of the ballot.

Signed from Roma for £37million last summer, bringing in Salah always seemed good business for Liverpool, who were acquiring a player who had just returned double figures for goals and assists in Serie A.

There were doubters, however, who pointed to the winger's difficult time with Chelsea earlier in his career, where he struggled to make an impact following his arrival from Basel. It was suggested that perhaps Salah didn't have the mettle to cut it in England's top flight.

Any such theories have since been blown out of the water, and likewise anyone who predicted Salah would thrive at Liverpool could not claim to have foreseen just how monumental his impact would be.

Thirty-four Premier League starts later, not only has Salah played a major role – the major role – in Liverpool securing a top-four finish for the second year running, he has set a new divisional high mark for goals in a single, 38-game season, netting 32 times for the Reds.

On top of that, he has also chipped in with ten assists, demonstrating the kind of team ethic that has made Jürgen Klopp's men so cohesive and in-tune this term, with the three-man attack – Salah, Roberto Firmino and Sadio Mané – especially devastating. 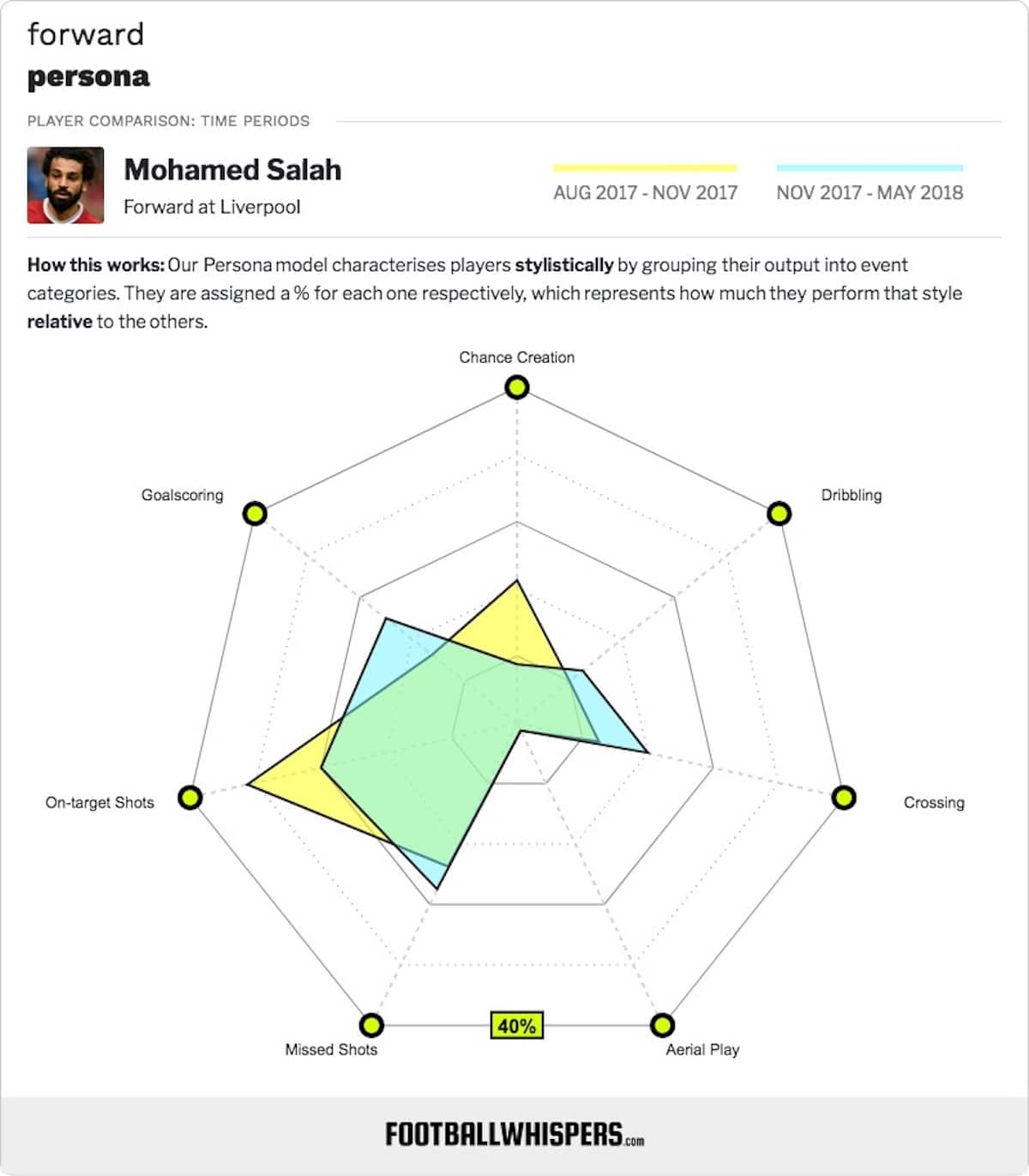 Although Salah's game is about more than goals, his ability to find the net has become a greater focus of his role with Liverpool as the season has drawn on. As the above Football Whispers Player Personal diagram illustrates, in his first three months with the club his chance-creation capabilities formed a large portion of his remit; since then, however, his ability to seek chances and score himself has been emphasised.

It's all amounted to a spectacular all-competitions return of 44 goals in just 51 outings. And, crucially, the Reds still have one fixture left to fulfil: the Champions League final against Real Madrid.

The Spanish giants, as reigning back-to-back champions of Europe, enter the tie in Kiev as strong favourites. But Klopp's side, having dispatched Premier League champions Manchester City in the quarter-finals, have shown themselves to be no respecters of reputation.

And with Salah in their line-up, coming in direct opposition with Marcelo, Madrid's supremely talented yet often over-adventurous left-back, Liverpool will have chances.

With hindsight, it seems strange that Salah came back to England with such a cast-iron reputation as a fluffer of scoring opportunities, someone, it was thought, who was capable of the sublime, but too often squandered very presentable chances. 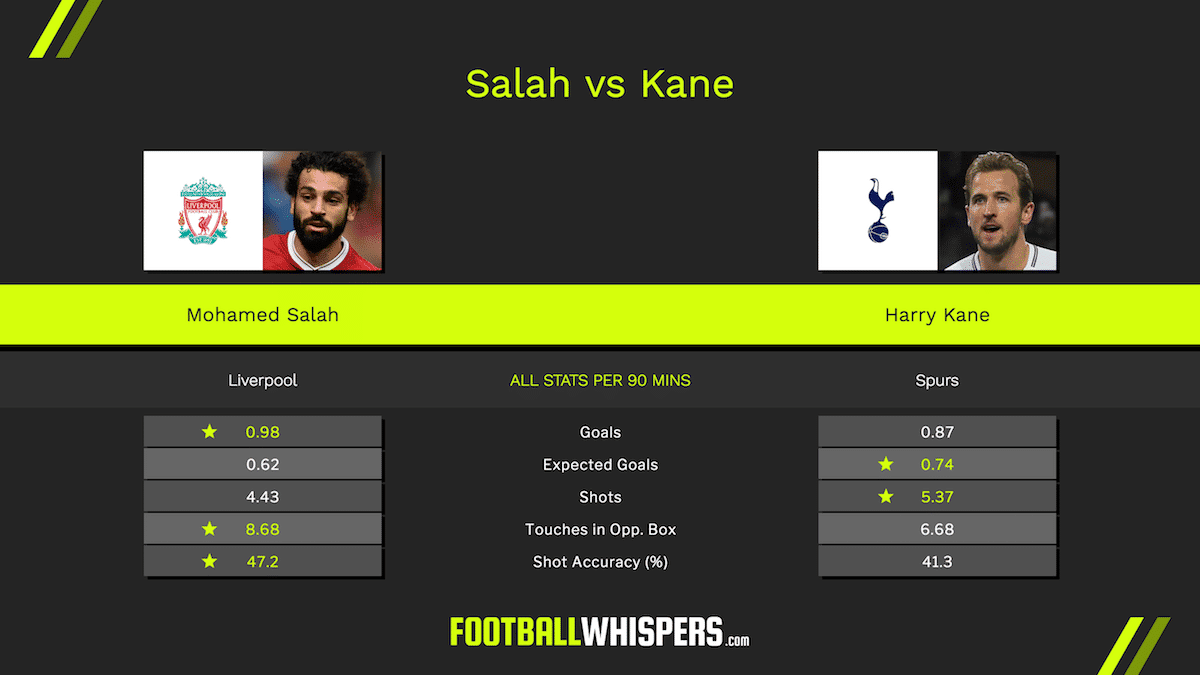 Whether due to a technical improvement, the effects of boosted confidence or simply that the initial hypothesis was incorrect, Salah has proven himself one of the world best goal-getters.

Indeed, the Egyptian, despite a starting position wide on the right of Liverpool's front three, has managed to wrestle the Premier League's Golden Boot from the grasp of Tottenham Hotspur‘s Harry Kane, who had won the award the two years previously, and who himself produced a career-high league goals return of 30.

And Salah has done so by being more clinical than the England striker. As the above graphic shows, the former Roma man has a higher average of goals per 90 minutes than Kane, with his superior efficiency evidenced by the fact his average expected goals per 90 (xG90) – a metric which employs historical shot data to measure the probability of any scoring chance leading to a goal – is lower, meaning, effectively, Salah has done more with less.

With one hurdle left to surmount before heading off to the World Cup with Egypt, if Salah is able to maintain his form he could yet threaten Cristiano Ronaldo and Lionel Messi's decade-long Ballon d'Or duopoly.

Such is his commitment to the Reds, though, team honours will be absolutely paramount in his mind. And as long as Salah is at Anfield, there could be plenty of those in Liverpool‘s future.

Find out who we voted Young Player of the Year