The fact Manchester City spent £130million on full-backs alone last summer was, for a time, used as a stick to beat them with, a sign of their transfer-market decadence, spending exuberant fees on a department considered perhaps the least important in any squad.

That point of view was quickly proven misguided, however, as anyone who was intimately familiar with Pep Guardiola's Barcelona and Bayern Munich sides would have attested from the outset.

The wide defenders in the Catalan tactician's system are often tasked with taking up positions more akin to a central midfield-remit, as well as undertaking their customary defensive duties and at times stretching wide in attack.

As such, Guardiola selects his full-back carefully, and didn't need to think twice about splashing around £50million to sign England international Kyle Walker from Tottenham Hotspur. 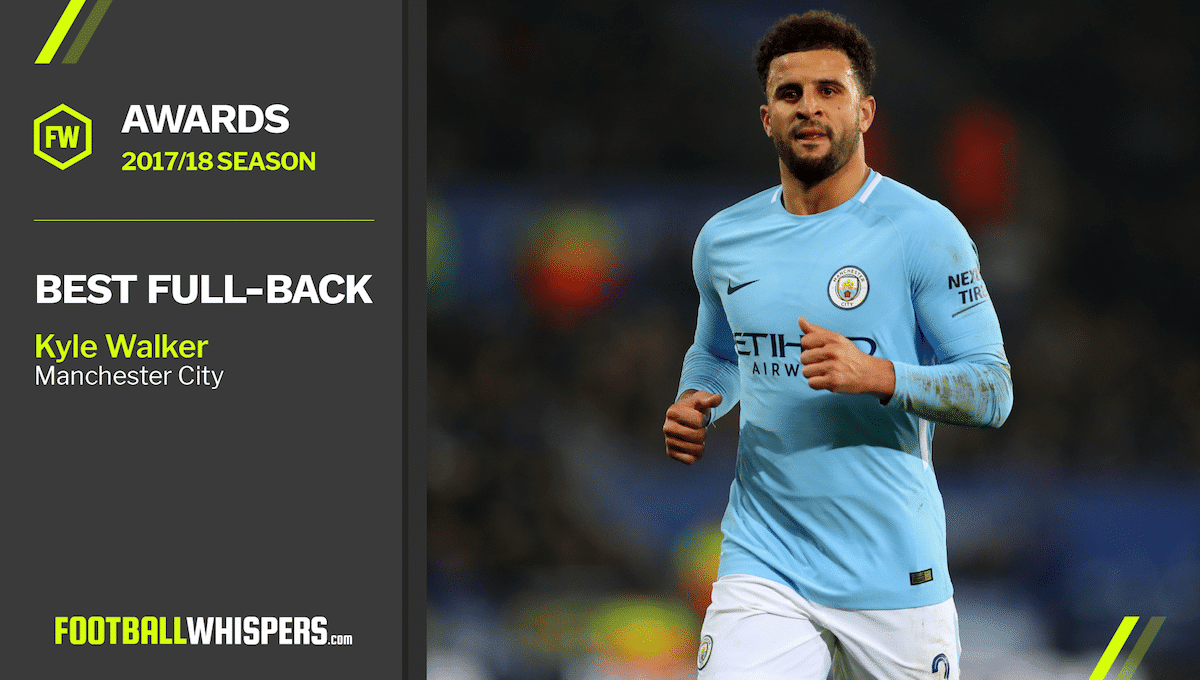 The 27-year-old defender made clear his intention to leave Spurs at the back end of the 2016/17 campaign, informing manager Mauricio Pochettino of his desire to test himself elsewhere, and jumped at the chance to join City.

And although City have experienced inconsistency of personnel on the left side of defence, thanks to Benjamin Mendy's early-season knee injury necessitating Fabian Delph Oleksandr Zinchenko and Danilo filling in in the position, Walker has been the rock of the right-hand side, featuring in 33 of 38 Premier League games.

With six assists, West Ham United‘s Aaron Cresswell is the only Premier League defender to have created more goals than the former Sheffield United man, while Walker has also demonstrated his versatility and growing defensive understanding by turning out as a centre-back in a back three for England.

And it is Walker's comfort in possession, no doubt improved greatly under Guardiola's tutelage, which makes him a viable option for a central role, as well as meaning he is suited perfectly to City's system. 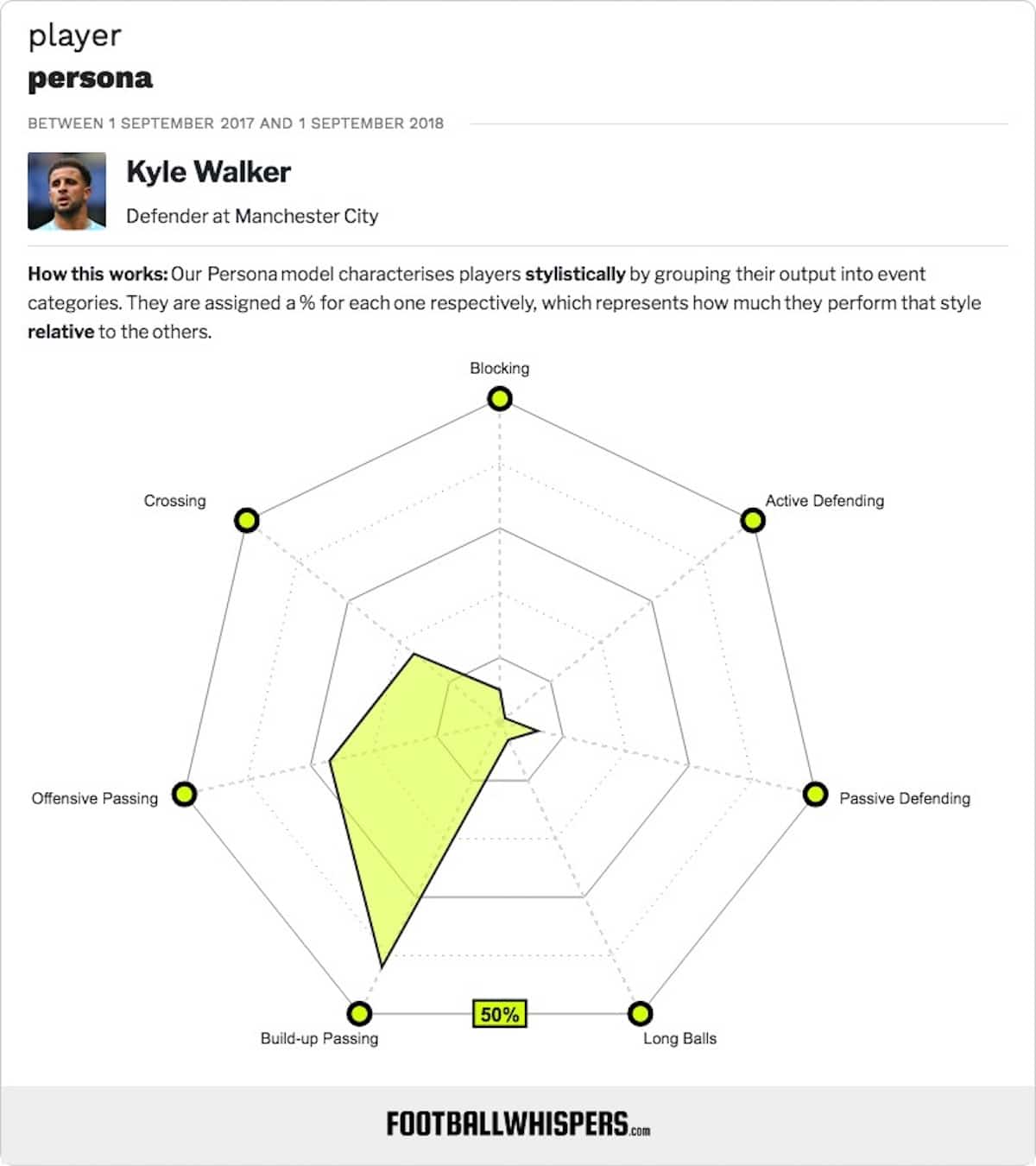 The above Football Whispers Player Persona graphic shows just how much of Walker's job is about what he is able to do with the ball, rather than how well he wins it back.

With City dominating possession on a weekly basis, Walker's role is centred around his ability to take part in their build-up passing and getting forward to support the attack when required, both jobs he has performed superbly since first pulling on a sky blue shirt. 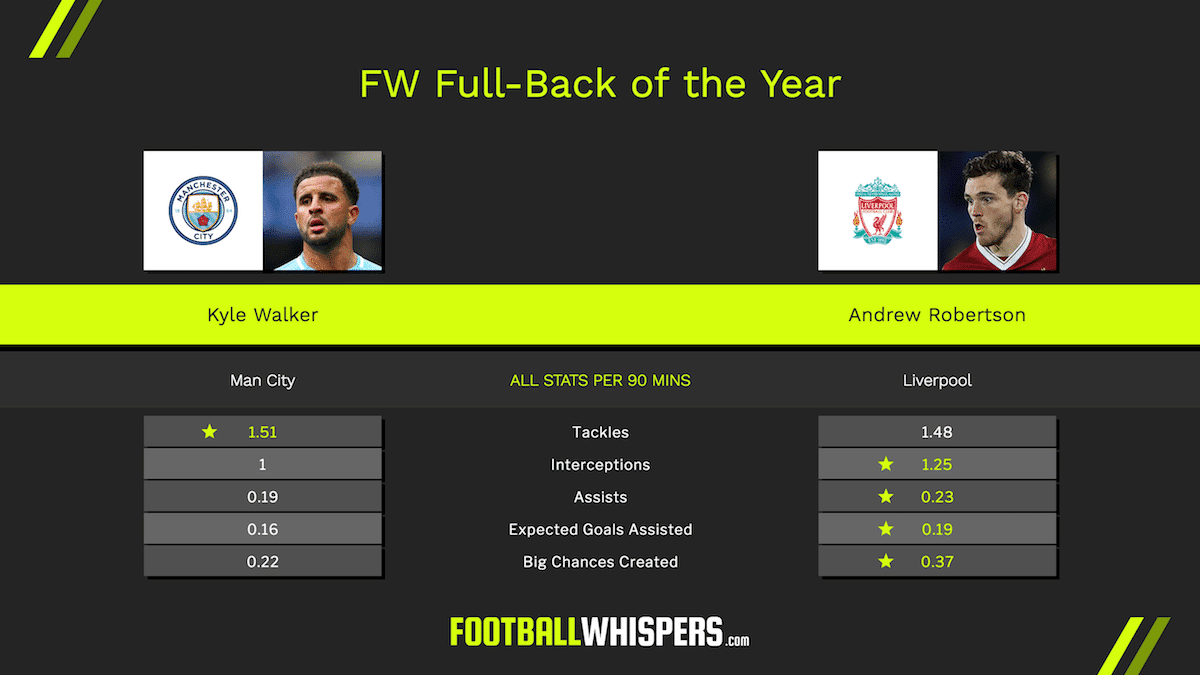 Walker's main rival in the voting for the Football Whispers 2017/18 Full-Back of the Year award was Liverpool‘s Andy Robertson, who has been hailed as one of the signings of the season after arriving at Anfield from relegated Hull City last summer.

Although Robertson initially took some time to adapt to his new surroundings, he has grown into his role on the left side of Jürgen Klopp's backline as the season has progressed, and will be a major weapon for the Reds in their upcoming Champions League final against Real Madrid.

As the above stats comparison graphic details, Robertson actually bests Walker in many key per-90 metrics, particularly when it comes to creativity and attacking threat.

However, for his part in City's remarkable, record-breaking, 100-point season, Walker gets the nod as our Full-Back of the Year, and there could be few complaints about his worthiness.

Find out who we voted Goalkeeper of the Year