You could forgive Bayern Munich fans for worrying about the future. Borussia Dortmund, not them, have emerged as the premier force in German football this season, with designs on breaking the Bavarian giants' vice-like grip on the Bundesliga title.

There is uncertainty in the dugout, too. Although a clearly talented coach, Niko Kovač has not had the smoothest of starts to life at the Allianz Arena, presiding over Bayern's worst season in seven years and in a seemingly perpetual state of looking up in envy at Lucien Favre's rampant Dortmund.

But, even before Kovač succeeded Jupp Heynckes – who capped his fourth managerial stint at the club with his fourth German crown – there has been consternation over an ageing squad.

Several key first-teamers, including Robert Lewandowski, Manuel Neuer and Mats Hummels, are already the wrong side of 30.

Then there is Franck Ribery and Arjen Robben, Bayern's long-time winged wizards, both of whom are set to depart the club this summer. 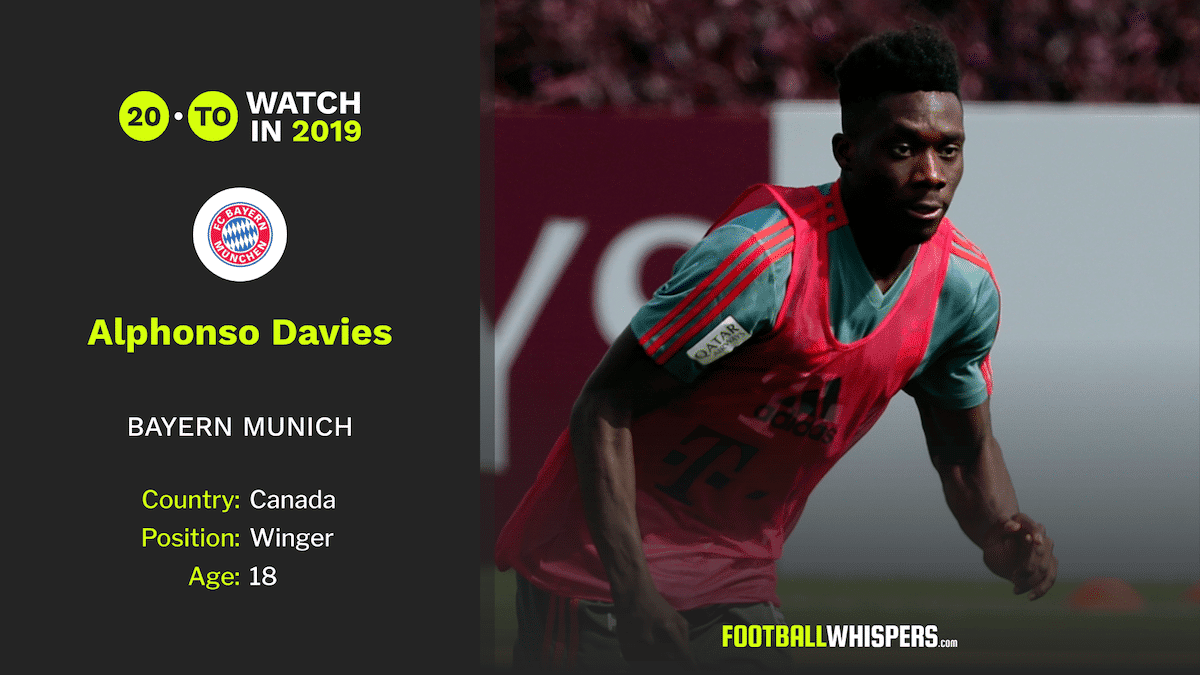 With well over 700 appearances between them, the revered duo are handing over the keys to Bayern's flanks, but thankfully this particular department seems in safe hands.

Kingsley Coman, the gifted but injury-prone Frenchman, is a natural successor, but even greater things are expected of Alphonso Davies.

Davies made his first-team debut on January 27 after joining from Vancouver Whitecaps, coming on as a late substitute in the 4-1 win over Stuttgart.

While that was a comfortable initiation, Davies got a clearer picture of the difficulties ahead in his very next game. With Bayern trailing 2-1 to Bayer Leverkusen, the 18-year-old replaced James Rodríguez in the 77th-minute.

Within seconds of his introduction, Davies was taking on Bayer defender Jonathan Tah and winning a corner. Unfortunately, there was to be no inspirational comeback, no instant heroics. The teenager looked on as Lucas Alario struck a controversial late third for the home side, condemning Bayern to their fourth defeat of the campaign and leaving them seven points adrift of Dortmund.

Thankfully for Davies, Bayern's expectations are centred more on what he can achieve in the long-term and, in terms of prospective impact, the Canadian is definitely worth getting excited about.

That Davies signed for one of the world's biggest clubs at 17 is a testament to his mental fortitude. For he is no ordinary prodigy; groomed for success from the earliest age. Instead, he spent the first five years of his life just trying to survive.

Whereas some young boys gaze longingly at their bedroom poster of Cristiano Ronaldo or Lionel Messi, Davies' family merely dreamed of fleeing the Ghanian refugee camp where he was born.

Offered the chance of a new life in Canada, they took it, relocating to Edmonton, Alberta. Not long after, Davies was turning heads at local football tournaments, his natural pace and impressive touch catching the attention of onlooking scouts and coaches.

At first, Davies played football for fun – and it certainly seemed as though he was having fun, a permanent smile lighting up the youngster's face. But with obvious technical abilities, he was strongly encouraged to consider football as not as an enjoyable pastime, but as a career.

Eventually, he was tearing up the academies of St. Nicholas and the Edmonton Strikers before joining the Vancouver Whitecaps at just 14. Within the space of a few months, Davies went from turning out for the club's under-16s to the senior side, making his MLS debut three months before his 16th birthday.

Not long after, he was scoring important goals, including an injury-time piledriver to beat Sporting Kansas City and send the Whitecaps through to the knockout round of the CONCACAF Champions League. 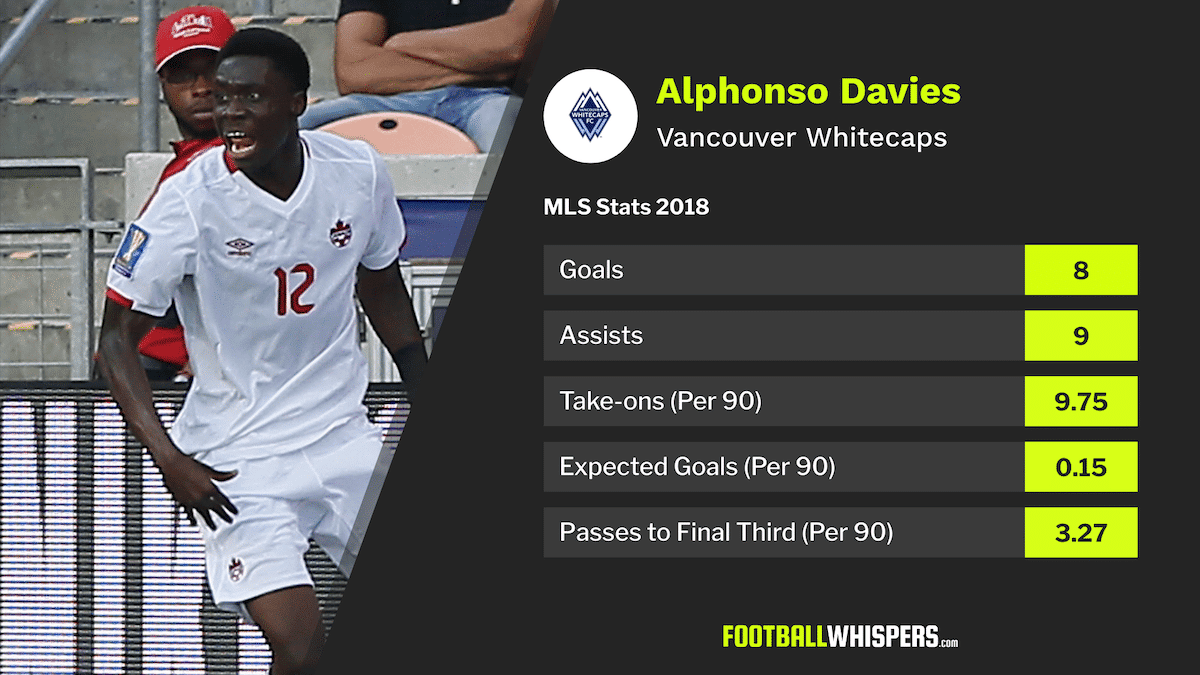 Having broken through towards the tail-end of the 2016 season, Davies became a regular starter in the 2017 campaign before setting the division alight in 2018.

He used the opening game to signal what was to come, scoring one and assisting another as the Whitecaps edged Montreal Impact 2-1. While he had to wait three months for his next goal, his performances during the interim period were consistently excellent.

For example, while a trip to eventual MLS champions Atlanta United ended with a 4-1 defeat, Davies was a constant threat down the Whitecaps' left flank, completing more take-ons (8), landing more tackles (4) and being fouled more times (4) than any other player.

It was a hugely impressive run that ultimately catapulted him into Bayern's arms, though. Davies ran the show in Vancouver's 5-2 win over Orlando City, scoring one and setting up another three. A few weeks later, he teed up Kei Kamara for what proved to be the winner against Chicago Fire before notching three goals and two assists in his next two games.

Bayern needed no further evidence of his immense potential, shelling out £9.8million for the winger, then an MLS record transfer which has since been broken by Miguel Almirón's move to Newcastle United.

Staying with the Whitecaps until the end of the campaign, he signed off in style, scoring twice in his farewell game against Portland Timbers, just days after having scooped the Whitecaps' Player of the Year and Goal of the Year awards.

And perhaps there is no better demonstration of Davies' skills than his award-winning strike against DC United, which you can watch below.

The way in which he managed to stay on his feet, twist and turn away from the defenders before unleashing a left-footed bullet into the far corner was hugely impressive and highlighted much of what makes Davies stand out; powerful, direct running, positive movement and the ability to fashion a chance out of nothing.

Of course, the Bundesliga is an enormous step-up, especially for a player whose career is still very much in its embryonic stages. And while some may have felt Davies should have stayed and honed his skills for a while longer in the MLS, it's clear he is destined for greater things.

But he finds himself in a peculiar situation at Bayern. Although he is an obvious replacement for one of the outgoing Ribery and Robben, his youth combined with his side's position in the table may restrict his playing time over the next three months.

His patience will eventually be rewarded. Having achieved superstar status in the MLS in no time, he must now bide his time and seize whatever chances come his way, be it as late cameos in Bundesliga games or in cup competitions.

Players with exceptional talent don't always make it at Bayern but Davies has already showcased great maturity to accompany his natural gifts. Once he gets a run of games in Munich, he has the potential to become a key player for Bayern and one of the greatest players to ever come out of North America.