Fulham to win and over 2.5 goals

Fulham vs Peterborough: Check out our betting tips

Fulham suffered a blow in their title ambitions at the weekend as they lost to Huddersfield. Will they bounce straight back with a win here? Find out with our Fulham vs Peterborough match preview with free tips, predictions and odds mentioned along the way.

We start our tips by backing Fulham to win this match with over 2.5 goals being seen. The Cottagers lost last time out but in their last five home games they've won three of them with each of those victories seeing goals galore; they've beaten Millwall 3-0 and had back to back 6-2 wins over Birmingham and Bristol City. When you consider the sorry state Peterborough are in, it's hard to envisage anything that isn't a big home win. Posh haven't won away in nine and five of those nine games have been defeats featuring over 2.5 goals.

In our first tip we've backed over 2.5 goals in conjunction with a Fulham win. Here we're just focussed on the goals and, as such, we've opted to crank things up by going for over 3.5. Fulham's last 10 games have seen that threshold broken on five occasions with a game average of 4.3 goals. Peterborough's last 10 games have seen an average of 2.5 goals per game but they have gone over 3.5 three times – twice when away from home.

Here are the key stats & form guide for Fulham vs Peterborough

It is looking very likely that these two sides will be separated by an entire division next season with Fulham leading the betting odds for promotion and Peterborough facing a big ask to avoid relegation. It means the three points on offer carry huge value for both sides.

Fulham lost last time out but they remain in pole position to win the league despite people questioning their mentality. A win here won't answer the question marks over that but a loss would intensify them with Posh very much a struggling side.

Peterborough's weekend was an ugly one. They lost their relegation six pointer to a late Derby goal and, as a result, Darren Ferguson called time on his reign at the club. The Posh will be desperate for a new manager bounce but it will have to be a big one for them to overcome Fulham. 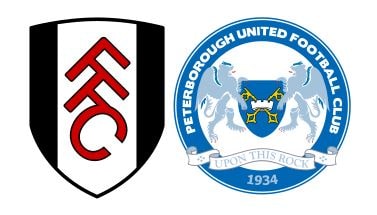