Fulham will look to get the routine 3 points from the struggling team of Derby. How will it end? Find out below!

Fulham vs Derby: Top Predictions and Betting Lines for Wednesday

Our team of experts is here to help all of those who need fresh ideas for the upcoming game with these in-depth predictions. For more expert Championship picks, please visit our dedicated page.

Let’s begin with a big prediction here but one that has also a high chance of success. In the last 2 games when Fulham hosted this derby both resulted in this prediction – one game ended with a 2:0 victory for Fulham and the other ended in 3:0. The home team is on the right track to secure a place in the Premier League next season. Both clubs have injury and suspension issues but it looks like that this would be a bigger hit for the currently ranked last Derby County.

Wayne Rooney and his boys will be struggling to find their way to the opponent’s side of the pitch. Ranked last and for a good reason. Derby has one of the worst-performing attacks in the league with only 13 goals scored in 17 games. It is unlikely that an away game to the currently ranked 2nd in the league will be any different.

Despite the bad attack, Derby does have a somewhat solid defense. So does Fulham. All of this suggests a somewhat boring game and the historical data confirms it – 6 of the last 10 games resulted in under 2.5 goals being scored. Fulham hasn’t allowed a single goal and they won’t start doing it just now.

Head-to-head data for the Fulham vs Derby game

Those are the key head-to-head statistics and odds for the Fulham vs Derby match:

Big win for the home team

Fulham has been absolutely demolishing all the opponents in the Championship. The club has 6 consecutive victories and a 7th is on its way when you play the worst team in the League. Ranked last, Derby County will be very fortunate to achieve a draw in this game but it doesn’t seem like it as the last 7 games have been a disappointment for the club.

There are injuries and suspensions for both teams, so they won't be playing at full strength this week. We suspect to see an interesting fixture, but the odds for a correct score are very good, so these predictions will most likely take place in our opinion. 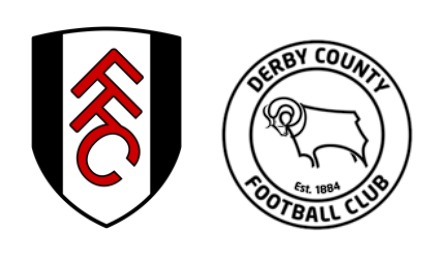 Common questions for the Fulham vs Derby game: