Fulham remain on course for promotion and a Championship title. Will they edge closer towards confirming it here? Find out with our Fulham vs Coventry match preview with free tips, predictions and odds mentioned along the way.

Fulham to make it three wins on the spin

Fulham have been the best side in the league by some distance this season and we expect them to win again here. They've won three of their last five games including their last two. Coventry meanwhile have won just one of their last eight games and arrive here on a four match winless run. You can expect Fulham to want revenge on Coventry as well because the Cottagers had an off day when they last met falling to a 4-1 defeat. That absolutely will not happen again.

We are backing Fulham to win and keep a clean sheet in this match. The Cottagers have kept a clean sheet in each of their last two games whilst winning both. Of equal importance is the form of Coventry; their last three defeats have all seen them fail to score. To further evidence this tip, Fulham have the best defensive record in the league whilst Coventry have the second least potent attack in the top half.

Here are the key stats & form guide for Fulham vs Coventry

Fulham vs Coventry: Let's look at the predicted lineups

Coventry were in the mix for promotion at one point, or so it seemed. Fulham meanwhile have looked on course for the title all season long and there is little to suggest that they won't end up as Champions.

Fulham aren't in the best form of their lives right now but they're still proving too good for most sides in England's second tier. With the season heading towards it's close they'll be extra motivated to wrap up the title that they've been chasing all season long.

Ergh, what a damp squib of an end to the season it looks like being for Coventry. During the first half of the campaign they looked good to at least challenge for a top six spot but their form has collapsed. Can they give their fans something to cheer by downing their high flying hosts?

A quickfire FAQ on Fulham vs Coventry 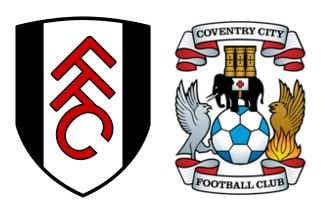