“It will be a miracle but we must fight together,” said Claudio Ranieri after his Fulham side fell to another defeat on Friday night. “If you fight you have one chance, if you don't you won't.”

Even fighting might not be enough now, though. Fulham, following that 3-1 defeat at West Ham United, are eight points adrift of safety with eleven games remaining. They have only accumulated 17 points all season.

There were glimpses of quality – as there have been throughout the season – on Friday night but Ranieri has been unable to fix Fulham’s most glaring issue: a porous defence that continues to ship goals at an alarming rate.

The Cottagers have already shipped 61 goals in the Premier League – more than two of last season’s relegated sides (Swansea and West Brom) conceded all season. And, despite the appointment of Ranieri back in November, there is no sign of improvement.

The question now for Fulham is where to go from here. Championship football next season, barring a “miracle”, in the words of Ranieri, seems an inevitability. So who do the club task with an immediate return to the top flight?

Ranieri, the wily Italian known for his ability to organise defences, was clearly appointed in an attempt to stem the flow of goals at the wrong end. But he has been unable to do anything about the shambolic individual errors that continue to plague Fulham.

At Leicester, Ranieri ordered in pizza for his players when they kept clean sheets. On one particularly barren spell, he said: “I want to buy pizza but my players don't want pizza… maybe they don't love pizza.”

You guess Fulham’s players have a strong dislike for pizza. They have kept just two clean sheets all season, both since Ranieri took over in November but against two of the lowest scoring sides in the division in Newcastle United and Huddersfield Town.

The stats, however, suggest there have been marginal defensive improvements under Ranieri. Fulham’s expected goals (xG) conceded per game before Slaviša Jokanović’s dismissal was 2.61. It has since decreased to 1.82 but remains the highest in the division. 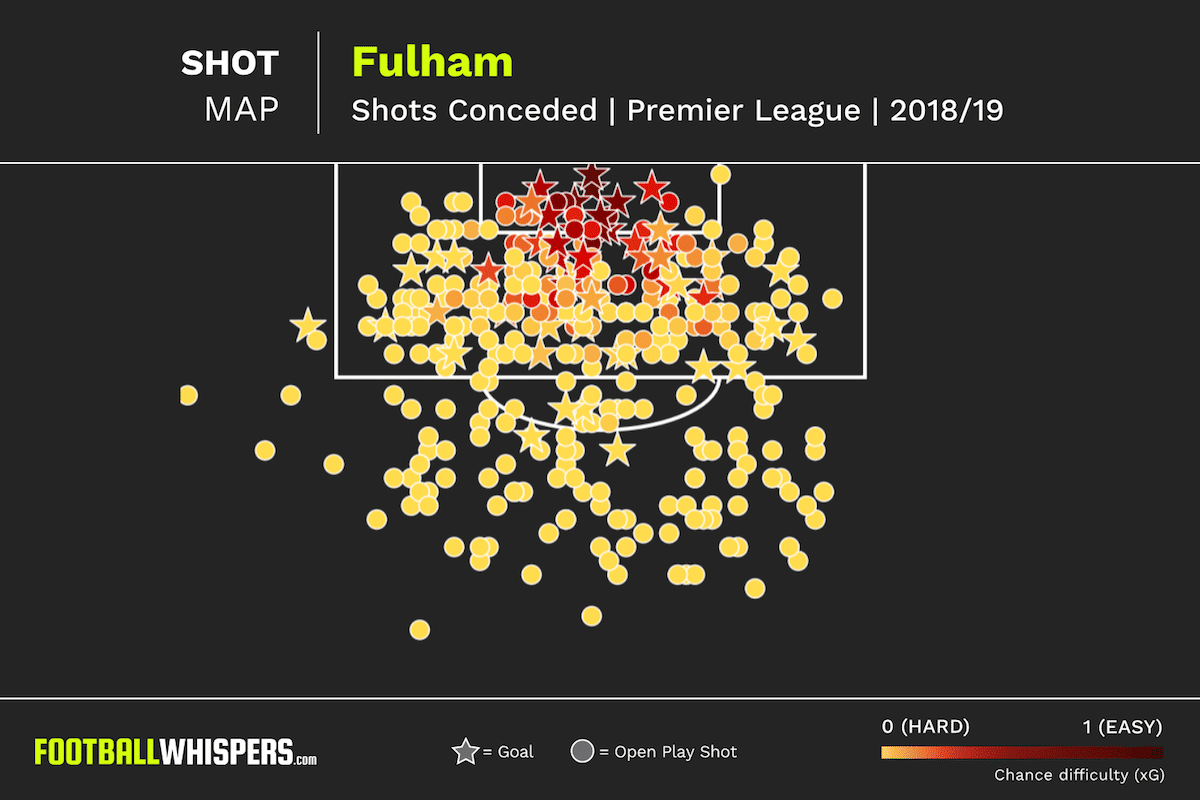 Fulham's actual goals conceded have gone down under Italian: two per game compared with 2.58 under Jokanović. And they are allowing their opposition fewer shots on goal, 14.4 compared with 16.41 previously.

The improvements are too marginal, though, to make any real difference. Most importantly, Fulham are not picking up enough points and will almost certainly be relegated.

There are signs Ranieri could begin to turn things around, and perhaps he would be able to make a more obvious impact after a summer of transfers. Even with a squad lacking in quality in key areas, the former Leicester boss has done his best to change things.

Jokanović was bemoaned for his focus on attack, and for assembling a top-heavy group of players. But Fulham have actually improved offensively under Ranieri: their xG per game is up at 1.39 – the tenth highest in the league – compared to 0.98.

They have not been clinical in front of goal, but with a tighter, more organised defence, they would likely have been on course to avoid relegation at this point of the season.

There have been some promising individual performances under Ranieri, too. Aleksandar Mitrović continues to impress while Joe Bryan and Tom Calum Chambers have benefited since the Italian’s arrival.

None of the minor positives, though, can gloss over the fact that Ranieri has failed to inspire a tangible upturn in fortunes for this Fulham side.

The club’s owners now have to consider whether he will be the right man to guide them back to the Premier League.

Shahid Khan may choose to keep faith in Ranieri, or he may opt for a manager with more experience in the Championship. Whichever way Fulham go, they will need to learn from the mistakes of this season.

Poor recruitment, perhaps out of naivety, has cost them badly following their return to the Premier League after four years away.

It has not helped, either, that Ranieri’s approach is so different to Jokanović’s. Fulham are scoring more and conceding fewer, but it seems they have had trouble adapting to an entirely new way of playing. With time fast running out, it is not an ideal situation.

The blame for this season’s disappointment can't be placed solely on Fulham’s two managers. Poor decision making has likely cost the club its place in the top flight. Next season, they will need to get it right.